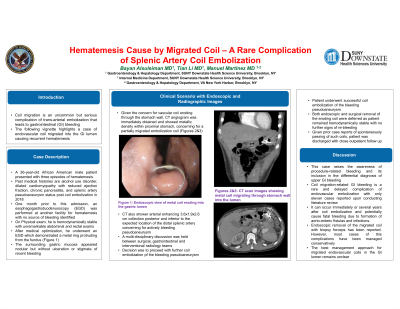 Introduction: Coil migration is an uncommon but serious complication of trans-arterial embolization that leads to gastrointestinal(GI)bleeding. The following vignette highlights a case of endovascular coil migrated into GI lumen causing recurrent hematemesis.

Methods: A 36-year-old African American male presented with three episodes of hematemesis. Past medical histories are alcohol use disorder, dilated cardiomyopathy with reduced ejection fraction, chronic pancreatitis, and splenic artery pseudoaneurysm(PA)status post coil embolization in 2018. One month previously, an upper endoscopy performed at another facility for UGI was reported as negative. On physical exam, he is hemodynamically stable with unremarkable abdominal and digital rectal exams. After medical optimization, he underwent an upper endoscopy which demonstrated a metal ring protruding from the posterior wall of the stomach [Figure 1]. The surrounding gastric mucosa appeared nodular but without ulcerations or stigmata of bleeding. Given the concern for coil protruding in through the stomach wall, CT angiogram was immediately obtained and showed linear metallic density within proximal stomach, possibly a partially migrated post-embolization coil. It also showed an arterial enhancing 3.6x 1.9x 2.6 cm collection posterior and inferior to the expected location of the distal splenic artery concerning for actively bleeding PA [Figure2, 3]. A multi-disciplinary discussion was held between surgical, gastrointestinal and interventional radiology teams. Decision was to proceed with further coil embolization of the bleeding PA.  Due to patient remaining hemodynamic stable, both endoscopic and surgically removal of embolization coil were deferred. Given prior case reports of spontaneously passing such coils, patient was discharged with outpatient follow-up.

Discussion: This case raises the awareness of iatrogenic procedure related bleeding and its inclusion in the differential diagnosis of Upper GI Bleeding. Coil migration is a rare and remote complication of endovascular embolization with only eleven cases reported in literature review. It can occur immediately or several years after and potentially cause fatal bleeding due to formation of aorto-enteric fistulas and infections. Endoscopic removal of the migrated coil with hot biopsy forceps has been reported. In most cases this complication has been conservatively followed by endoscopy. However, the best management approach for migrated endovascular coils in the GI lumen remains unclear. 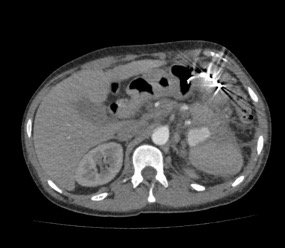 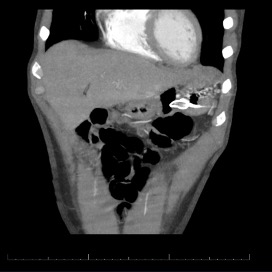