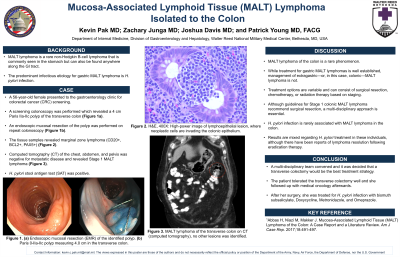 Introduction: Mucosa-associated lymphoid tissue (MALT) lymphoma is a rare non-Hodgkin B-cell lymphoma commonly seen in the stomach but can be found anywhere in the gastrointestinal tract. We present a patient found to have MALT lymphoma of the colon during a screening colonoscopy, which was initially thought to be a laterally spreading sessile serrated lesion.

Methods: A 56-year-old female presented for colorectal cancer screening. She reported having chronic abdominal pain and new increase in stool frequency in the setting of a rise in life stressors. The colonoscopy revealed a 4 cm Paris 0-IIa-IIc polyp of the transverse colon and the patient was referred for repeat exam with endoscopic mucosal resection of the lesion. During the colonoscopy, the polyp was lifted without issue but proved difficult to entrap in various polypectomy snares. A few small pieces of the polyp were eventually removed and collected while the rest of the lesion was left in situ and tattoos applied proximally and distally. Histology revealed marginal zone lymphoma. Computed tomography of the chest, abdomen, and pelvis was negative for metastatic disease and confirmed Stage 1 MALT lymphoma. H. pylori stool antigen test was positive and Strongyloides stercoralis IgG antibody was negative. A multi-disciplinary team decided that a transverse colectomy would be the best treatment strategy based on the patient’s wishes. The patient tolerated the transverse colectomy well. Her medical oncologist advised clinical follow up and imaging (as the lesion was visible on CT preoperatively) every six months for five years as well as repeat colonoscopy at 1 year from surgery. Finally, she was treated for H. pylori infection with quadruple therapy.

Discussion: MALT lymphoma of the colon is exceedingly rare. While treatment for gastric MALT lymphomas is well established, management of colonic MALT lymphoma is not. Treatment options can consist of surgical resection, chemotherapy, or radiation therapy based on staging. Although guidelines for Stage 1 colonic MALT lymphoma recommend surgical resection, a multi-disciplinary approach is essential. H. pylori infection is rarely associated with MALT lymphoma in the colon. Results are mixed regarding H. pylori treatment in these individuals, although there have been reports of lymphoma resolution following eradication therapy. Overall this case demonstrated the importance of a multidisciplinary approach in a rare case that was initially thought to be a lateral spreading lesion. 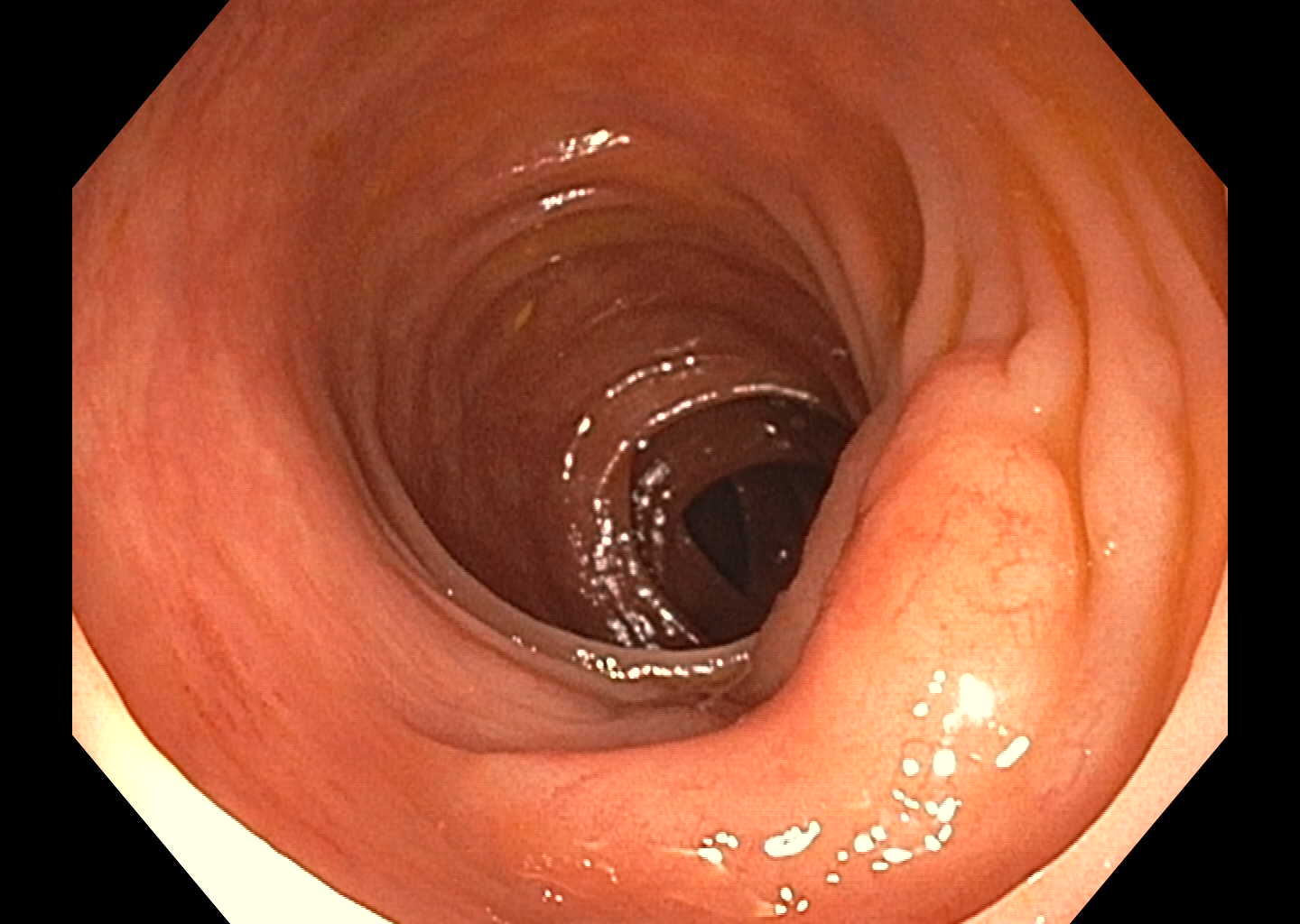 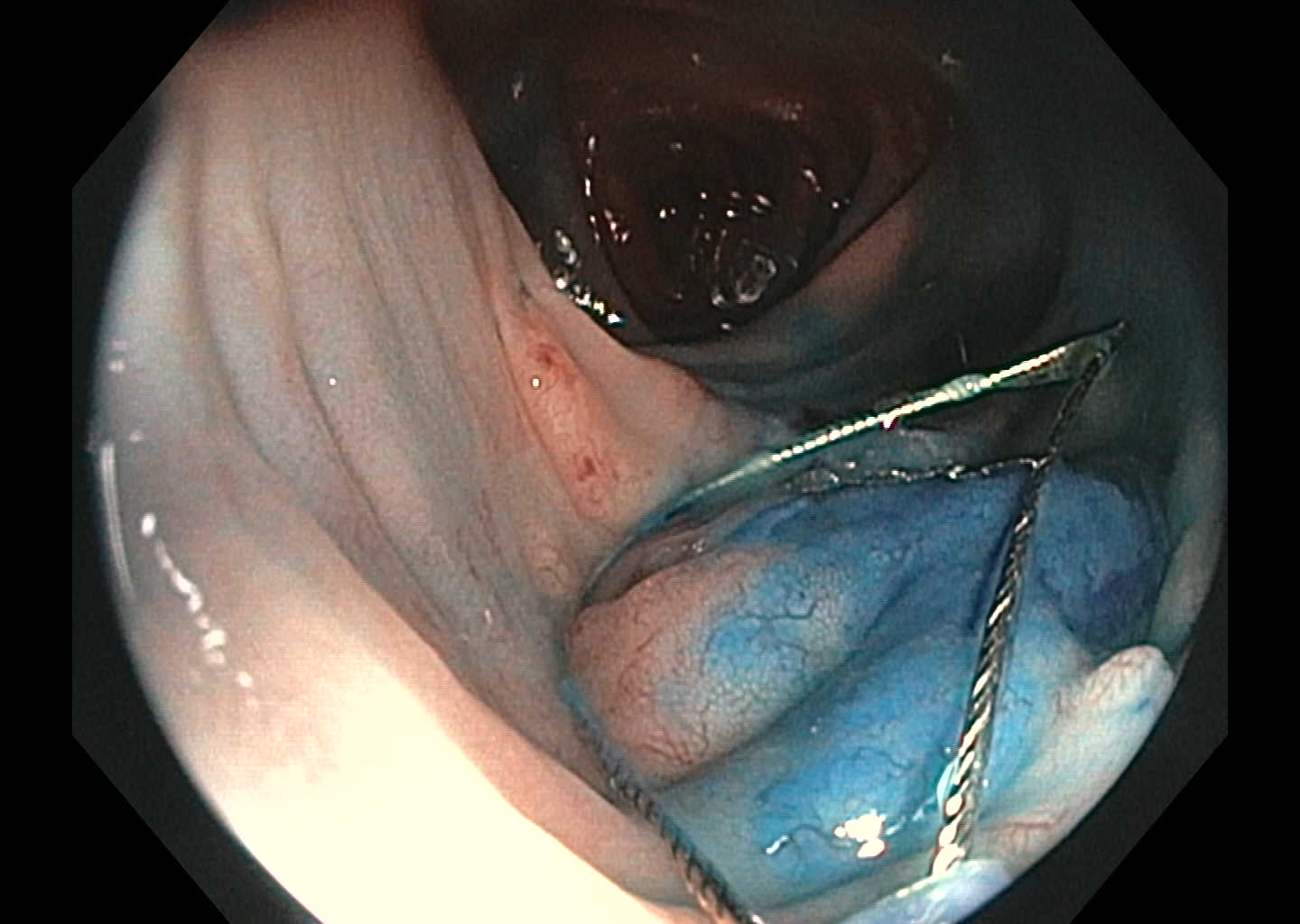 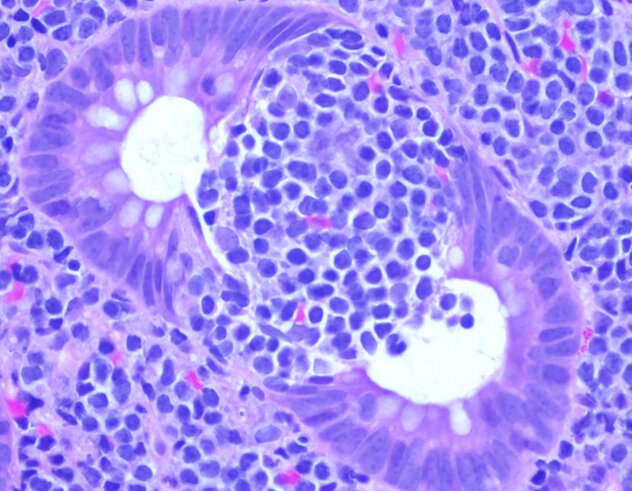