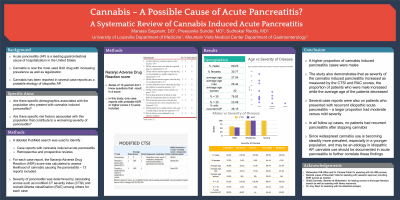 Introduction: Acute pancreatitis (AP) is a leading gastrointestinal cause of hospitalization in the United States, and 20% of AP is considered idiopathic. Cannabis has now become the most commonly used illicit drug with increasing prevalence as well as legalization. Cannabis has been reported in several case reports as a possible etiology of idiopathic AP. The aim of this critical analysis is to systematically review the literature and analyze cannabis as an etiology of idiopathic and recurrent AP. Another aim is to identify any risk factors or demographics associated with this population and a correlation with the severity of AP.

Methods: Case reports with cannabis induced acute pancreatitis, as well as retrospective and prospective reviews, were identified systematically through a detailed PubMed search. For each case report, the Naranjo Adverse Drug Reaction (ADR) score as well as severity of the pancreatitis were calculated, the latter with scores such as modified CT severity index (CTSI) and revised Atlanta classification (RAC) among others.