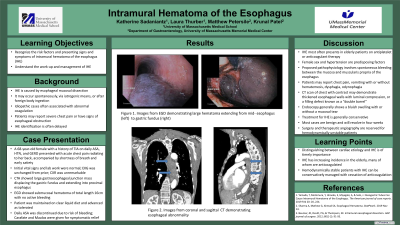 Introduction: Intramural hematoma of the esophagus (IHE) is caused by esophageal mucosal dissection, and may occur spontaneously, via iatrogenic means such as nasogastric tube insertion, or after foreign body ingestion. Idiopathic cases are often associated with antiplatelet or anticoagulant use. We report a case of intramural hematoma of the esophagus successfully treated with conservative management.

Methods: A 68-year-old female with a history of TIA and hypertension presented with acute chest pain radiating to her back and shortness of breath. Initial vital signs and lab work were normal. EKG was unchanged from prior and a chest x-ray was unremarkable. A CT angiogram showed no aortic dissection but did show a large gastroesophageal junction mass displacing the gastric fundus and extending into the proximal esophagus. Fluid was noted tracking up the esophagus with effacement of fascial plane between esophageal wall and mediastinal fat. Esophagogastroduodenoscopy showed a submucosal hematoma extending from the mid esophagus to the gastric fundus in a total length of 16cm. A blood clot was found in the gastric fundus without active bleeding. The patient was maintained on a clear liquid diet and progressed as tolerated. Her daily aspirin was discontinued due to risk of bleeding. She was started on Carafate and Maalox for symptomatic relief and discharged after resolution of her presenting symptoms.

Discussion: IHE most often presents in elderly patients on antiplatelet or anticoagulant therapy. Female sex and hypertension are felt to be predisposing factors. The proposed pathophysiology involves spontaneous bleeding between the mucosa and muscularis propria of the esophagus. Patients present most commonly with chest pain. Vomiting with or without hematemesis, dysphagia, and odynophagia have also been described. CT scan with contrast is the preferred diagnostic modality and often shows thickened esophageal walls with luminal compression or obstruction, or a filling defect which may resemble a dual lumen or “double barrel.” Endoscopy typically demonstrates a bluish swelling with or without a mucosal tear. Treatment for IHE is conservative. Most cases have a benign course and the hematoma typically resolves within four weeks. Surgery and therapeutic angiography are reserved for patients who are hemodynamically unstable. Ultimately, IHE is an important entity to identify since conservative management is appropriate in most cases and patients can be reassured of its benign nature. 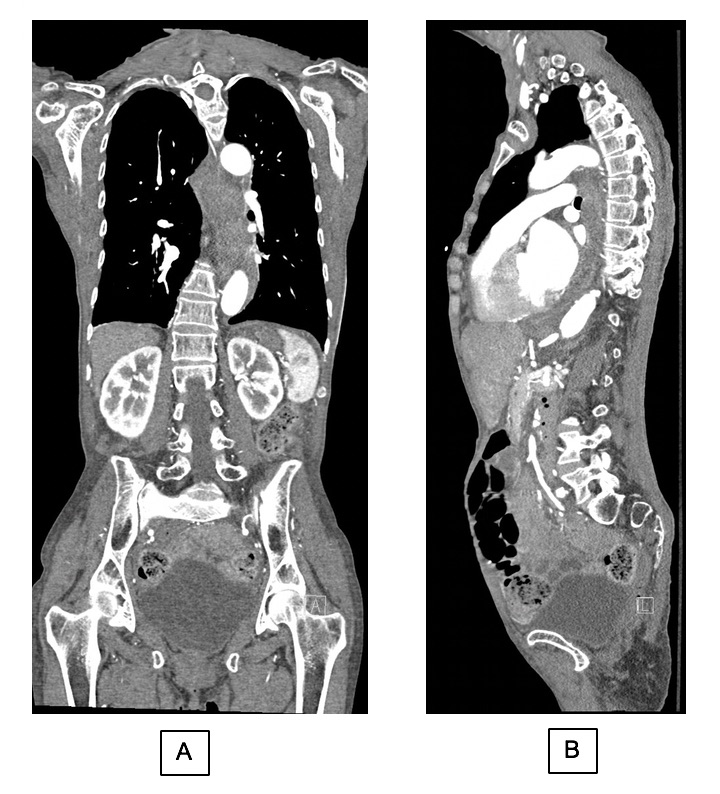