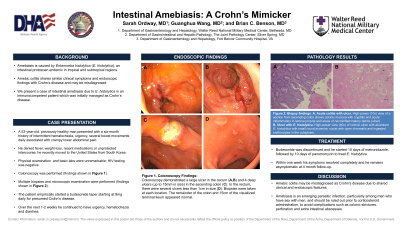 Introduction: Amebiasis is caused by Entamoeba histolytica (E. histolytica), an intestinal protozoan endemic in tropical and subtropical regions. Amebic colitis shares similar clinical symptoms and endoscopic findings with Crohn’s disease and may be easily unrecognized and misdiagnosed. We present a case of intestinal amebiasis due to E. histolytica in an immunocompetent patient which was initially managed as Crohn’s disease.

Methods: A 53-year-old, previously healthy man presented with a six-month history of intermittent hematochezia, urgency and watery diarrhea (several times daily), accompanied by mild crampy lower abdominal pain. He denied fever, weight loss, or recent medication use. He had 6 same-sex sexual partners in the year prior to presentation but denied having unprotected intercourse. An active duty service member, he had recently moved from South Korea, and had been stationed in Italy, Turkey and Germany prior to that. Physical examination was unremarkable. Complete blood count, hemoglobin, electrolytes and liver enzymes were within normal limits. Recent HIV testing was negative. Colonoscopy demonstrated a large ulcer in the cecum and 4 deep ulcers (up to 15mm in size) in the ascending colon. In the rectum, there were several ulcers less than 1cm in size. Biopsies were taken at each location. The remainder of the colon and 15cm of the visualized terminal ileum appeared normal. The patient was empirically started a budesonide taper starting at 9mg daily for presumed Crohn’s disease. The endoscopic biopsies showed colonic ulceration with many trophozoites consistent with E. histolytica. The patient was contacted within two weeks of his colonoscopy. He reported his symptoms had not worsened, but he continued to have urgency, hematochezia and diarrhea. Budesonide was discontinued and he started 10 days of metronidazole, followed by 10 days of paromomycin. Within one week his symptoms resolved completely and he remains asymptomatic at 4 month follow-up.

Discussion: Amebic colitis may be misdiagnosed as Crohn’s disease due to the low incidence of invasive amebiasis in industrialized countries and the shared similar clinical and endoscopic features. Amebiasis is an emerging parasitic infection, particularly among men who have sex with men. Amebiasis should be ruled out prior to corticosteroid administration, to avoid complications such as colonic strictures, perforation and extra intestinal abscesses. 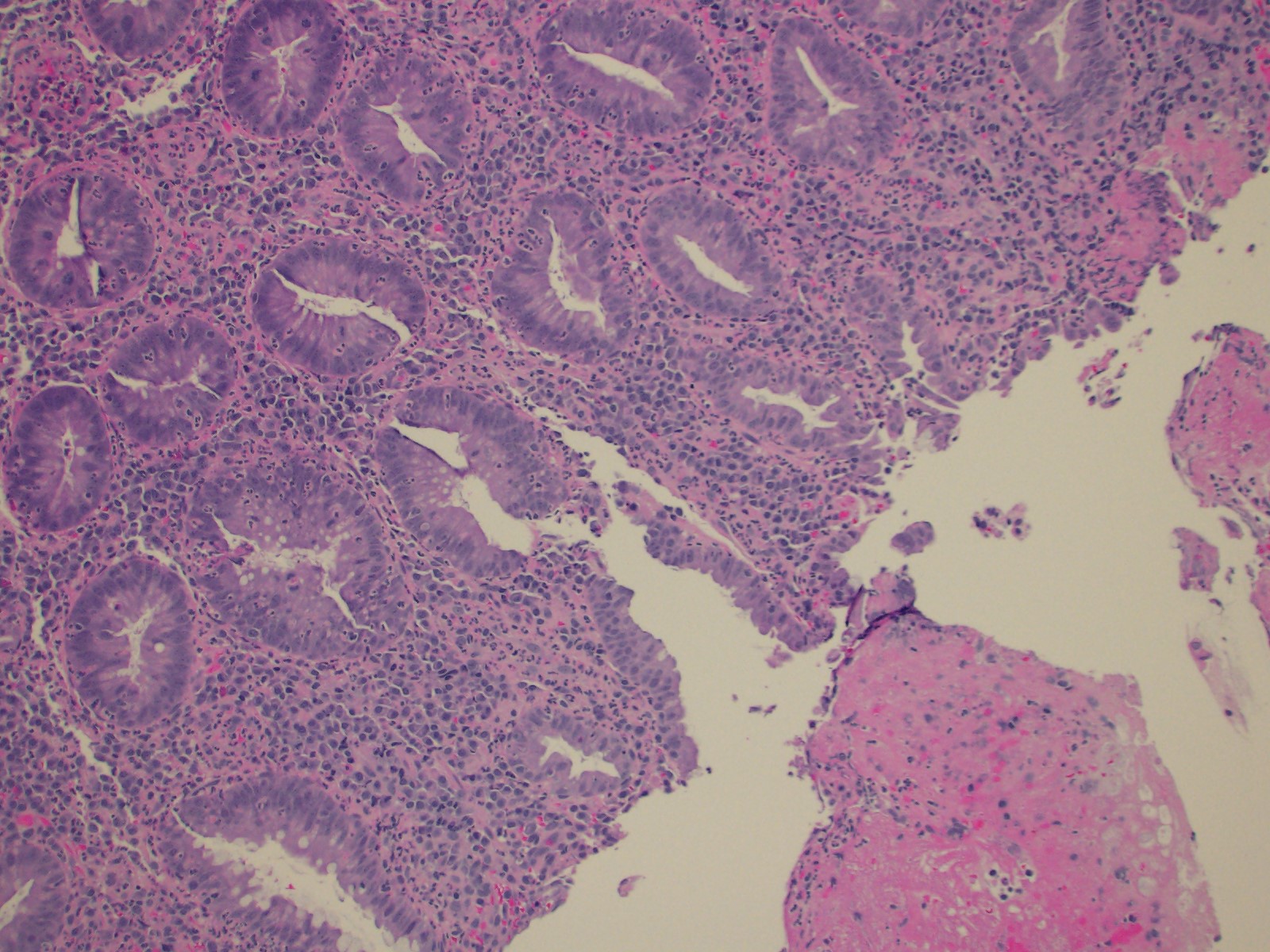 Figure 1. Acute colitis with ulcer. High-power view of a section from ascending colon shows colonic mucosa with cryptitis and acute inflammation in lamina propria and areas of necroinflammatory debris (ulcer). 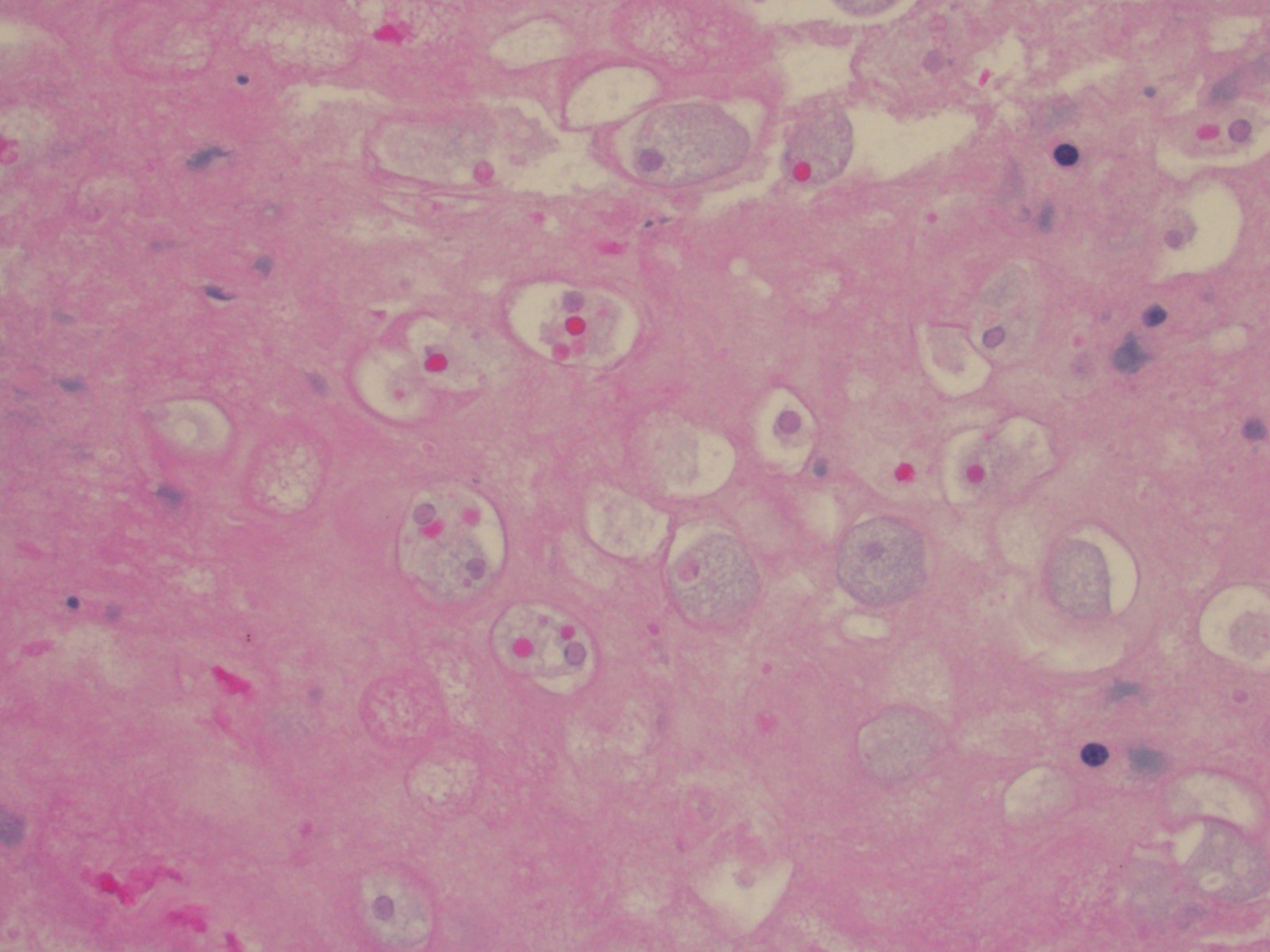 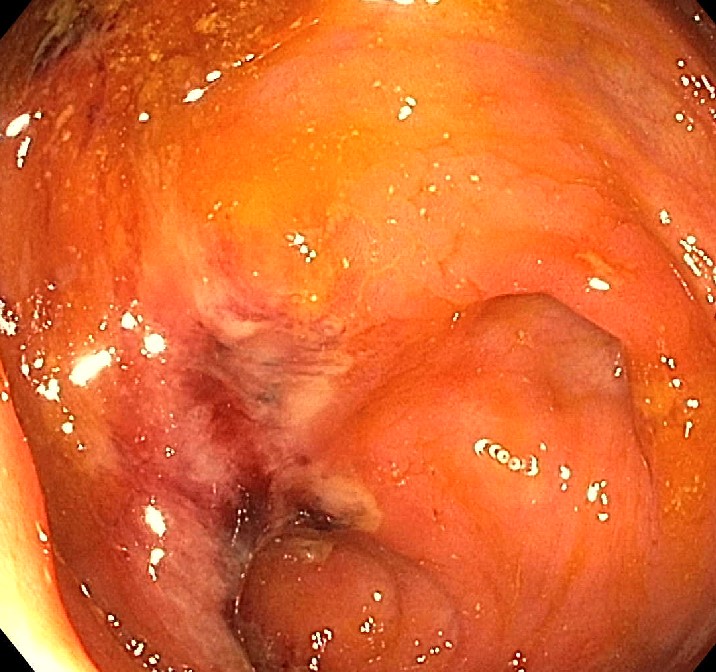 Figure 3. Cecal ulcer. Colonoscopy demonstrated a large ulcer in the cecum (approximately 15mm) and several small ulcers in the ascending colon and rectum.