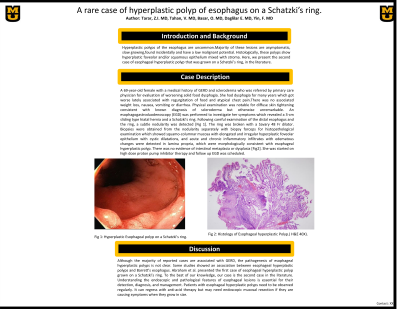 Introduction: Hyperplastic polyps of the esophagus are uncommon.Majority of these lesions are asymptomatic, slow growing,found incidentally and have a low malignant potential. Histologically, these polyps show hyperplastic foveolar and/or squamous epithelium mixed with stroma. Here, we present the second case of esophageal hyperplastic polyp that was grown on a Schatzki’s ring, in the literature.

Methods: A 69-year-old female with a medical history of GERD and scleroderma who was referred by primary care physician for evaluation of worsening solid food dysphagia. She had dysphagia for many years which got worse lately associated with regurgitation of food and atypical chest pain.There was no associated weight loss, nausea, vomiting or diarrhea. Physical examination was notable for diffuse skin tightening consistent with known diagnosis of scleroderma but otherwise unremarkable. An esophagogastroduodenoscopy (EGD) was performed to investigate her symptoms which revealed a 3-cm sliding type hiatal hernia and a Schatzki’s ring. Following careful examination of the distal esophagus and the ring, a subtle nodularity was detected [Fig 1]. The ring was broken with a Savary 48 Fr dilator. Biopsies were obtained from the nodularity separately with biopsy forceps for histopathological examination which showed squamo-columnar mucosa with elongated and irregular hyperplastic foveolar epithelium with cystic dilatations, and acute and chronic inflammatory infiltrates with edematous changes were detected in lamina propria, which were morphologically consistent with esophageal hyperplastic polyp. There was no evidence of intestinal metaplasia or dysplasia [Fig2]. She was started on high dose proton pump inhibitor therapy and follow up EGD was scheduled. 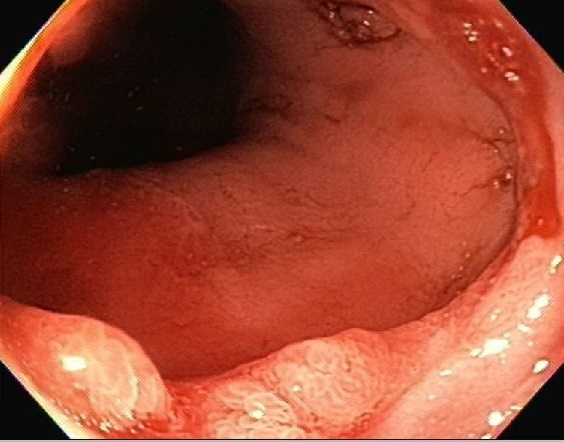 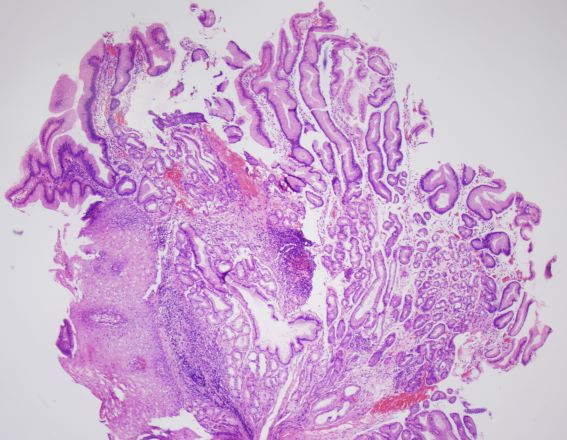