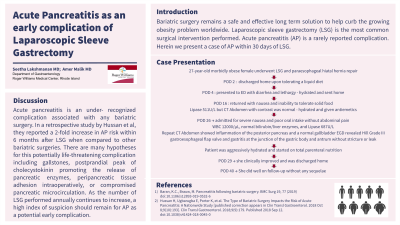 Methods: A 27-year-old morbidly obese female underwent LSG and paraesophageal hiatal hernia repair after complete outpatient evaluation. On post-op day (POD) 2, she was discharged home upon tolerating a liquid diet. She presented to the Emergency Department (ED) four days later with multiple episodes of diarrhea and lethargy. Stool studies did not reveal any infection. She was hydrated and discharged home. On POD 16, she returned with nausea and inability to tolerate solid food but denied any abdominal pain. Her lipase was elevated at 511U/L. However, CT Abdomen with contrast was normal. She was advised to stay hydrated and discharged with antiemetics. She was re-evaluated twice more for similar complaints and on her 5th ED visit on POD 26, she was admitted for severe nausea and poor oral intake. Patient still denied abdominal pain but endorsed some regurgitation. She appeared dehydrated and her abdominal exam was benign. Labs revealed WBC 12000/µL, Creatinine 0.8mg/dL, normal bilirubin/liver enzymes, and Lipase 687U/L. Repeat CT Abdomen showed inflammation of the posterior pancreas and a normal gallbladder. Esophagogastroduodenoscopy revealed Hill Grade III gastroesophageal flap valve and gastritis at the junction of the gastric body and antrum without stricture or leak. Patient was aggressively hydrated the first day and subsequently started on total parenteral nutrition. Her lipase peaked at 785U/L but she clinically improved and was discharged home 3 days later. She did well on follow-up without any sequelae.

Discussion: AP is an under-recognized complication associated with any bariatric surgery. In a retrospective study by Hussan et al, they reported a 2-fold increase in AP risk within 6 months after LSG when compared to other bariatric surgeries. There are many hypotheses for this potentially life-threatening complication including gallstones, postprandial peak of cholecystokinin promoting the release of pancreatic enzymes, peripancreatic tissue adhesion intraoperatively, or compromised pancreatic microcirculation. As the number of LSG performed annually continues to increase, a high index of suspicion should remain for AP as a potential early complication.