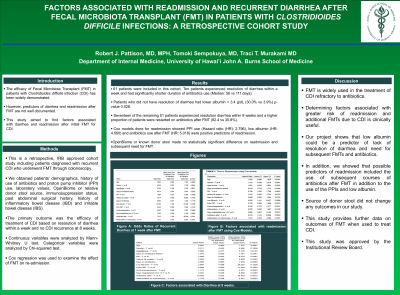 This is a retrospective, IRB approved cohort study including patients diagnosed with recurrent CDI who underwent FMT through colonoscopy. We obtained patients’ demographics, history of use of antibiotics and proton pump inhibitor (PPI) use, laboratory values, OpenBiome or relative donor stool source, immunosuppression status, past abdominal surgical history, history of inflammatory bowel disease (IBD) and irritable bowel disease (IBS). The primary outcome was the efficacy of treatment of CDI based on resolution of diarrhea within a week and no CDI recurrence at 8 weeks. Continuous variables were analyzed by Mann-Whitney U test. Categorical variables were analyzed by Chi-squared test. Cox regression was used to examine the effect of FMT on re-admission.

Results: 61 patients were included in this cohort. Ten patients experienced resolution of diarrhea within a week and had significantly shorter duration of antibiotics use (Median: 56 vs 111 days). Patients who did not have resolution of diarrhea had lower albumin < 3.4 g/dL (30.0% vs 3.9%) p-value 0.028. Seventeen of the remaining 51 patients experienced resolution diarrhea within 8 weeks and a higher proportion of patients were restarted on antibiotics after FMT (82.4 vs 30.8%). Cox models done for readmission showed PPI use (Hazard ratio (HR): 2.796), low albumin (HR: 4.560) and antibiotics use after FMT (HR: 5.018) were positive predictors of readmission. OpenBiome or known donor stool made no statistically significant difference on readmission and subsequent need for FMT.

Discussion: FMT is widely used in the treatment of CDI refractory to antibiotics. Determining factors associated with greater risk of readmission and additional FMTs due to CDI is clinically useful. Our project shows that low albumin could be a predictor of lack of resolution of diarrhea and need for subsequent FMTs and antibiotics. In addition, we showed that possible predictors of readmission included the use of subsequent course of antibiotics after FMT in addition to the use of the PPIs and low albumin. Source of donor stool did not change any outcomes in our study. This study provides further data on outcomes of FMT when used to treat CDI. 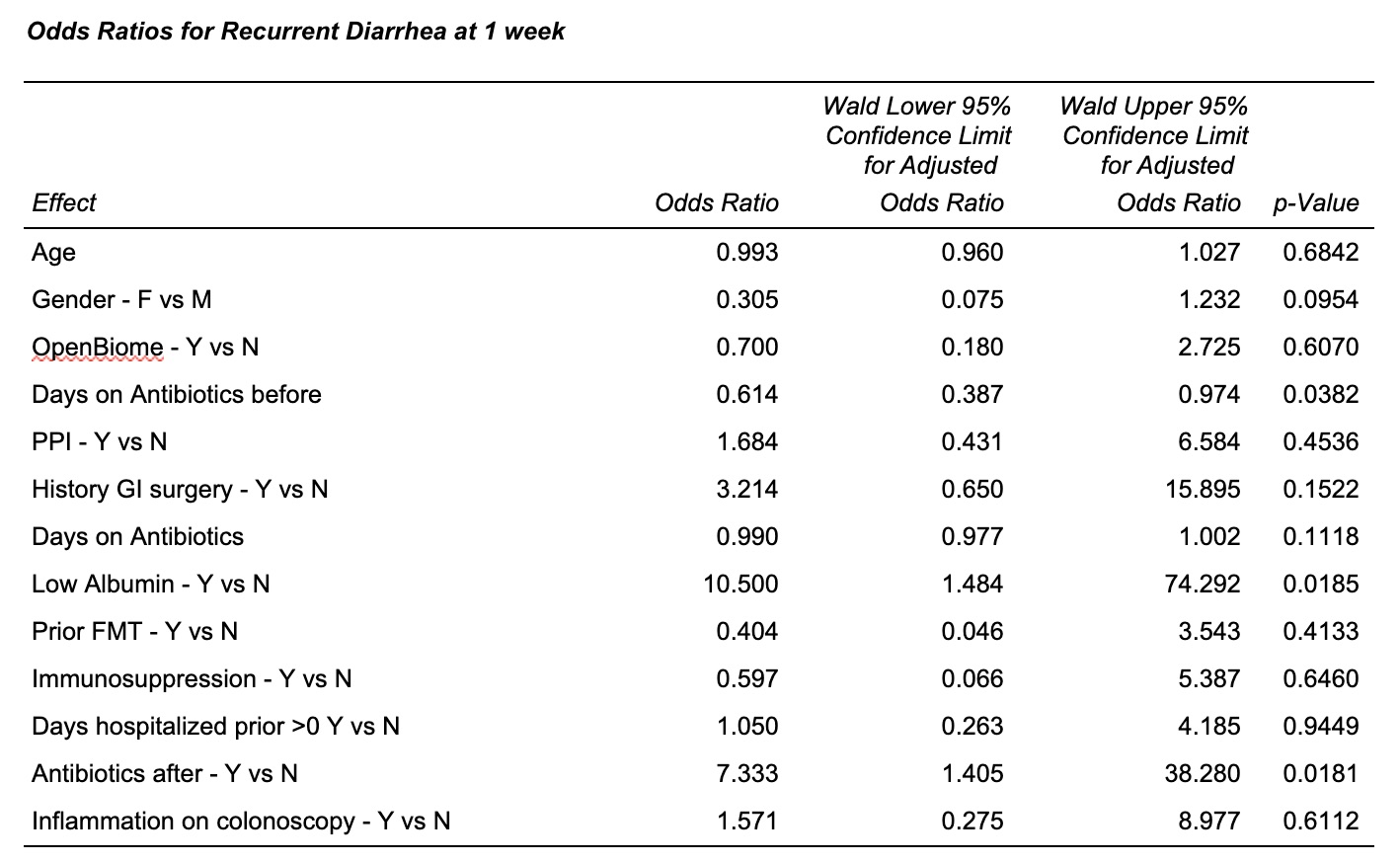 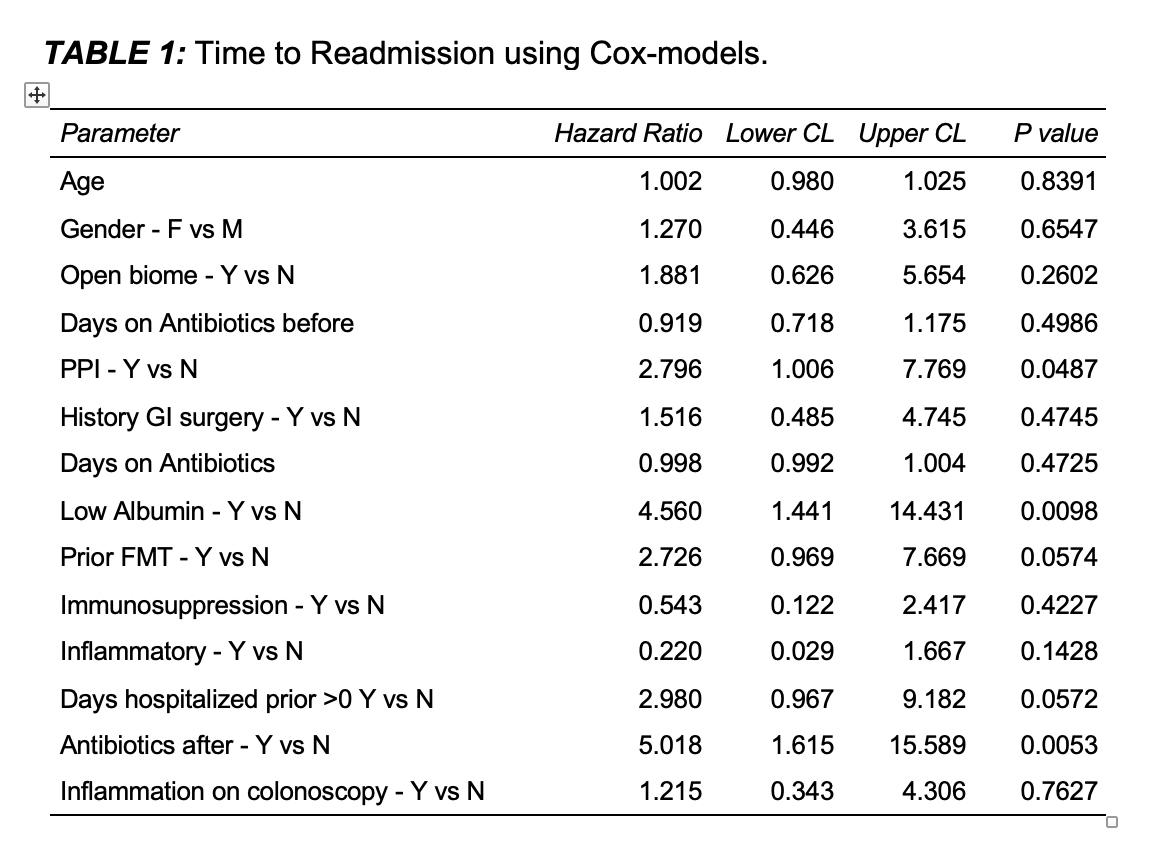 Factors associated with readmission after FMT. 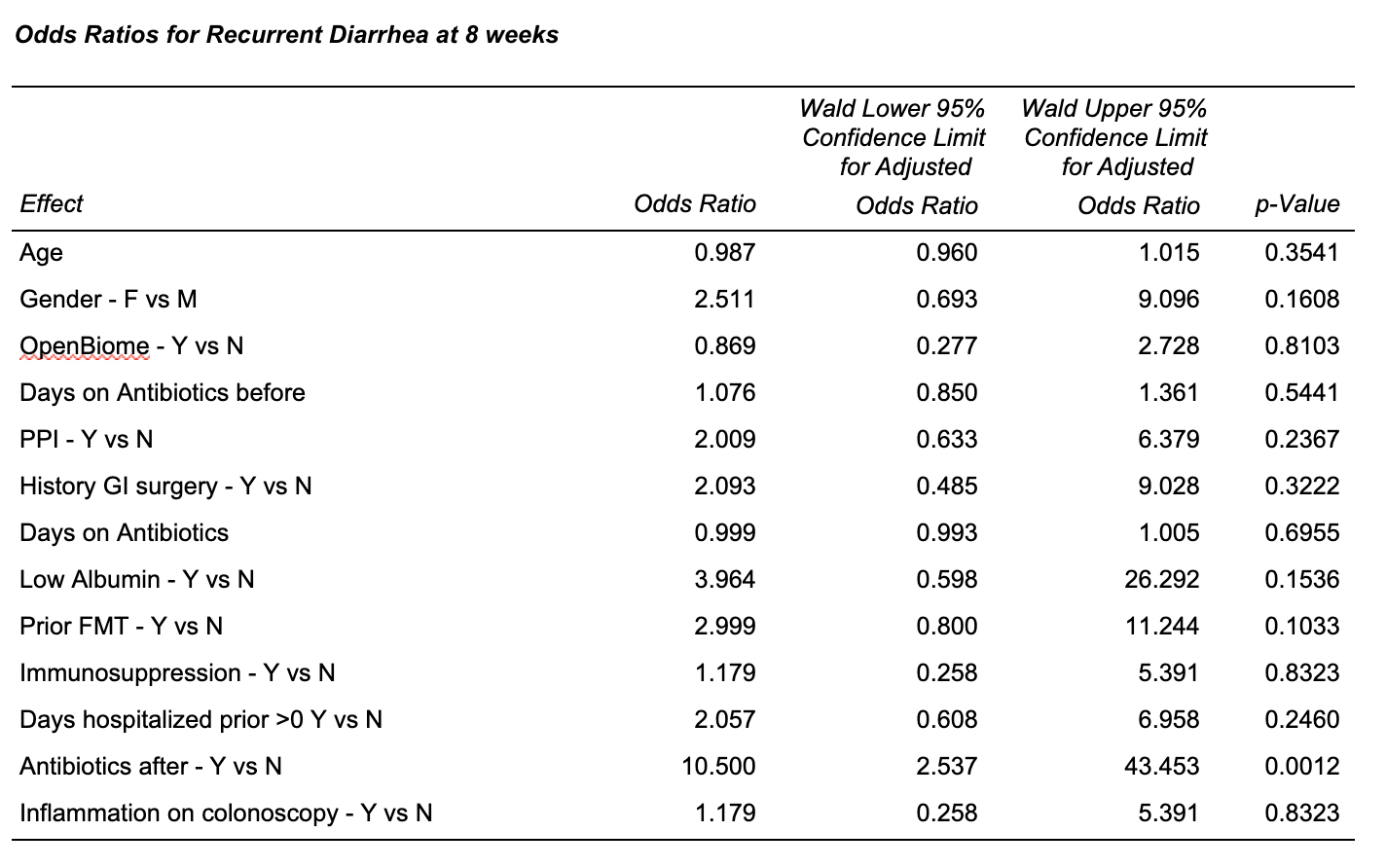