P1198 (S0552). - Inpatient Endoscopy for Iron Deficiency Anemia May Be Unnecessary in Young Patients Without Overt GI Bleeding 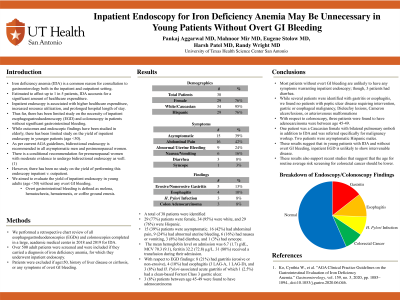 Introduction: Iron deficiency anemia (IDA) is a common reason for consultation to gastroenterology both inpatient and outpatient. Estimated to affect up to 1 in 5 patients, IDA accounts for a significant amount of healthcare expenditure. Given the higher cost and prolonged length of stay associated with inpatient endoscopy, we aimed to evaluate the yield of inpatient endoscopy in young adults without any overt GI bleeding.

Methods: We performed a retrospective chart review of all esophagogastroduodenoscopies (EGDs) and colonoscopies completed at a large, academic medical center in 2018 and 2019 for IDA. Over 500 adult patients were screened and were included if they carried a diagnosis of iron deficiency anemia, for which they underwent inpatient endoscopy.  Patients were excluded if age≥ 50, history of liver disease or cirrhosis, or any symptoms of overt GI bleeding.

Results: A total of 38 patients were identified of which 29 (77%) were female, 34 (95%) were white, and 29 (76%) were Hispanic. Most patients were asymptomatic. However, 16 (42%) had abdominal pain, 9 (24%) had abnormal uterine bleeding, 6 (16%) had nausea or vomiting, 3 (8%) had diarrhea, and 1 (3%) had syncope. The mean hemoglobin level on admission was 6.7 (1.7) g/dL, MCV 70.3 (9.1), ferritin 32.2 (72.8) µg/L. 31 (80%) received a transfusion during their admission. Average Blatchford bleeding score was 6.5 (2.1). With respect to EGD findings: 5 (20%) had gastritis (erosive or non-erosive), 4 (10%) had esophagitis (3 LAG-A, 1 LAG-D), and 3 (8%) had H. Pylori-associated acute gastritis of which 1 (2.5%) had a clean-based Forrest Class 3 gastric ulcer. No patients had peptic ulcer disease requiring intervention, malignancy, Dialeufoy lesions, Cameron ulcers, or arteriovenous malformations. With respect to colonoscopy, 3 (8%) patients between age 45-49 were found to have adenocarcinoma. One patient was a Caucasian female with bilateral pulmonary emboli in addition to IDA and was referred specifically for malignancy workup. Two patients were asymptomatic Hispanic males. There were no other significant findings on colonoscopy.

Discussion: These results suggest that in young patients with IDA and without overt GI bleeding, inpatient EGD is unlikely to show intervenable disease. While a significant percentage had colon cancer, it may be reasonable to refer these patients for prompt EGD and colonoscopy as outpatients if otherwise clinically stable.