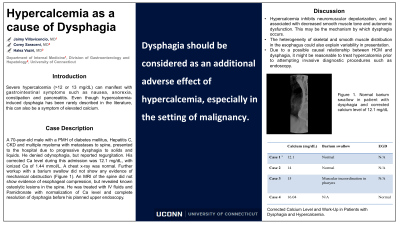 Introduction: Severe hypercalcemia, (levels greater than 12 or 13 mg/dL) can manifest with gastrointestinal symptoms such as nausea, anorexia, constipation and pancreatitis. Hypercalcemia inhibits neuromuscular depolarization, and is associated with decreased smooth muscle tone and autonomic dysfunction. Even though hypercalcemia-induced dysphagia has been rarely described in the literature, this might be one of the mechanisms by which dysphagia may occur.

Methods: A 70-year-old male with a past medical history of diabetes mellitus, Hepatitis C, chronic kidney disease and multiple myeloma with metastases to spine, presented to the hospital due to progressive dysphagia to solids and liquids. He had a hospitalization for symptomatic hypercalcemia about a month prior, when his corrected calcium (Ca) level was 13.6 mg/dL. He had noticed resolution of his dysphagia after being treated for hypercalcemia, but had recurrence of symptoms a couple of weeks prior to this presentation. He denied odynophagia, but reported regurgitation. His corrected Ca level during this admission was 12.1 mg/dL, with ionized Ca of 1.44 mmol/L. A chest x-ray was normal. Further workup with a barium swallow did not show any evidence of mechanical obstruction (Figure 1). An MRI of the spine did not show evidence of esophageal compression, but revealed known osteolytic lesions in spine. He was treated with intravenous fluids and Pamidronate with normalization of Ca level and complete resolution of dysphagia.

Discussion: There have been few case reports of patients with dysphagia and hypercalcemia of malignancy (HCM), in which symptoms resolved with treatment of hypercalcemia. The reason why dysphagia only affects some patients with elevated Ca remains unknown. It could be an under recognized or a rare complication. The heterogeneity of skeletal and smooth muscle distribution in the esophagus could also explain variability in presentation.

There is not enough data about dysphagia and hypercalcemia from benign etiologies. This is possibly due to lower levels of Ca in these cases compared to cases with HCM. Furthermore, contribution of hypercalcemia towards dysphagia in cases with external compression of the esophagus by a benign tumor cannot be entirely ruled out.

Due to a possible causal relationship between HCM and dysphagia, it might be reasonable to treat hypercalcemia prior to attempting invasive diagnostic procedures such as endoscopy. 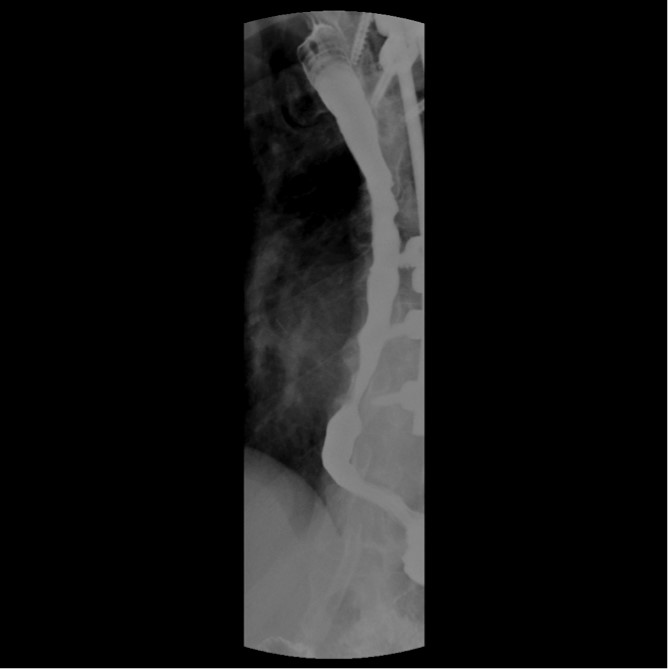 Normal barium swallow in patient with dysphagia and corrected calcium level of 12.1 mg/dL

Corrected Calcium Level and Work-Up in Patients with Dysphagia and Hypercalcemia.