P0074 (S0080). - Risk Factors for Choledocholithiasis: Investigating the Validity of the “4 F's” and Other Potential Predictors 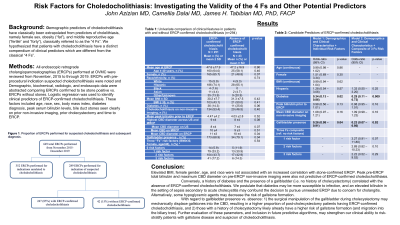 Discussion: There was no significant association between the 4 Fs, total bilirubin, reported visualization of stone and common bile duct diameter on non-invasive imaging and ERCP-confirmed choledocholithiasis.