P0765 (S0322). - Impact of Surveillance Colonoscopy Intervals in the Elderly Population Aged 75 Years and Above 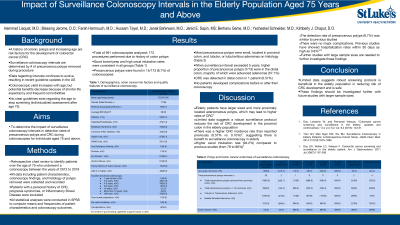 Introduction: A history of colonic polyps and increasing age are risk factors for development of colorectal cancer (CRC). Surveillance colonoscopy intervals are determined by number of precancerous polyps removed during the procedure. Data regarding such intervals continues to evolve resulting in recent updates in guidelines in the United States. We aim to determine the impact of surveillance colonoscopy intervals in detection rates of precancerous polyps and CRC during colonoscopies for individuals aged 75 and above.

Methods: We conducted a retrospective chart review to identify patients who underwent a colonoscopy between the years of 2012 to 2019 who were over the age of 75. We collected data on patient characteristics, colonoscopy findings and histology of polyps removed. Patients with a personal history of CRC, polyposis syndromes, or Inflammatory Bowel Disease were excluded. All statistical analyses were conducted in SPSS version 26 to compute means and frequencies of patient characteristics and colonoscopy outcomes.

Results: A total of 591 colonoscopies were analyzed out of which 173 procedures were performed due to history of colon polyps.  Median age was 78 years. A majority of the patients were female (55.5%) and Caucasian (92.5%). Good bowel preparation and high cecal intubation rates were consistent in all groups (Table 1). The majority of patients used aspirin (56.1%), had an ASA level 2 or less (71.7%) while a significant proportion had metabolic syndrome (43.3%), obesity (34.1%), history of alcohol abuse (35.3%) and were ex-smokers (38.7%). Precancerous polyps were found in 15/173 (8.7%) of colonoscopies. Most of the precancerous polyps were small, located in the proximal colon, and tubular or tubulovillous adenomas on histology (Table 2). When surveillance interval exceeded 5 years, a higher proportion of precancerous polyps (7/13) were in the distal colon, majority of which were advanced adenomas (57.1%). CRC was detected in the distal colon in one patient (0.6%).  No patients developed complications during or after their colonoscopy.

Discussion: Our limited data suggests that a robust surveillance colonoscopy protocol reduces the risk of CRC development in the proximal colon in the elderly population. Surveillance colonoscopy in the elderly population was safe with comparable detection rate of precancerous polyps but a higher CRC incidence rate than reported previously. Further studies with larger samples are needed to further investigate these findings.