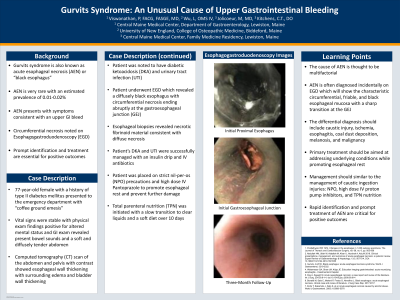 Introduction: Acute esophageal necrosis (AEN) also known as Gurvits syndrome or black esophagus, is an extremely rare cause of upper gastrointestinal bleeding (UGIB) characterized by extensive circumferential necrosis of the esophageal mucosa terminating abruptly at the gastroesophageal junction (GEJ). AEN has an estimated prevalence of 0.01 to 0.2%. We present a case of AEN diagnosed on esophagogastroduodenoscopy (EGD) in a critically ill patient who presented with a diabetic ketoacidosis (DKA) and coffee ground emesis.

Methods: 77-year-old female with a significant past medical history of type II diabetes mellitus presented to the hospital for evaluation of altered mental status and coffee ground emesis. On physical exam, patient’s vitals were stable. She was alert but only oriented to person and place and had hypoactive bowel sounds on abdominal examination with diffuse tenderness to palpation. Labs were significant for leukocytosis at 20.2(K/µL) and findings consistent for a UTI and DKA. Contrast computed tomography (CT) of the chest, abdomen, and pelvis showed diffuse esophageal wall thickening with surrounding edema. An EGD was performed which revealed a diffusely black esophagus ending abruptly at the GEJ. Biopsies of the esophagus consistent with diffuse necrosis. Patient was given high dose IV pantoprazole, kept nil-per-os (NPO), placed on total parenteral nutrition, and treated for UTI and DKA. Patient’s mental status had returned to baseline and was transitioned to clear liquids followed by a soft diet prior to discharge.

Discussion: AEN is a rare but important disease to identify in critically ill patients presenting with hematemesis or melena. The etiology of AEN is hypothesized to be multifactorial although vascular compromise seems to be a mainstay. The rich arterial connections of the esophagus make ischemic esophageal necrosis a rare finding. Diagnosis is often made on EGD revealing a black and diffusely necrotic esophagus and shows a circumferential, friable, and black mucosal surface with a sharp transition at the Z-line. Biopsy may reveal mucosal and submucosal necrosis on histology. Treatment should be aimed at treating the underlying conditions and management should be similar to a patient with caustic ingestion. In conclusion, our case report illustrates that a thorough history, a high level of suspicion, and prompt treatment for acute esophageal necrosis and the underlying etiology are key to a positive outcome. 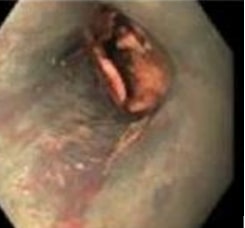 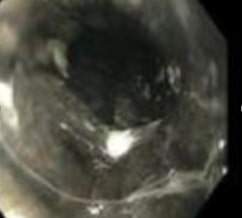 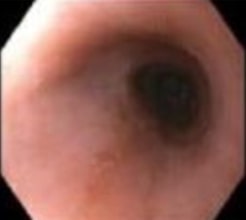