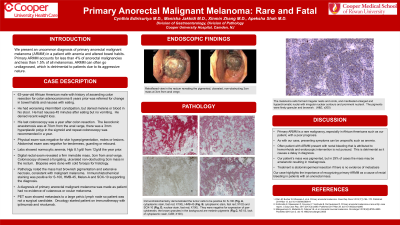 Introduction: We present an uncommon diagnosis of primary anorectal malignant melanoma (ARMM) in a patient with anemia and altered bowel habits. Primary ARMM accounts for less than 4% of anorectal malignancies and less than 1.5% of all melanomas. ARMM can often go undiagnosed, which is detrimental to patients due to its aggressive nature.

Methods: 63 y.o. African American male with a history of ascending colon resection for colon adenocarcinoma 8 years prior was referred for change in bowel habits and nausea with eating. He had worsening intermittent constipation, but denied melena or blood in his stool. He had nausea 45 minutes after eating but no vomiting. He denied recent weight loss. His last colonoscopy was a year after colon resection. The ileocolonic anastomosis was at 70cm from anal verge, there was a 3mm hyperplastic polyp in the sigmoid and repeat colonoscopy was recommended in a year.  Physical exam was negative for skin hyperpigmentation, moles or lesions. Abdominal exam was negative for tenderness, guarding or rebound. Labs showed normocytic anemia, Hgb 8.1 g/dl from 12 g/dl the year prior. Digital rectal exam revealed a firm immobile mass, 3cm from anal verge. Colonoscopy showed a fungating, ulcerated, non-obstructing 3cm mass in the rectum. Biopsies were done with cold forceps for histology.  Pathology noted the mass had brownish pigmentation and extensive necrosis, consistent with malignant melanoma.  Immunohistochemical staining was positive for S-100, HMB-45, Melan-A and SOX-10 supporting the diagnosis.  A diagnosis of primary anorectal malignant melanoma was made as patient had no evidence of cutaneous or ocular melanoma. PET scan showed metastasis to a large pelvic lymph node so patient was not a surgical candidate.  Oncology started patient on immunotherapy with ipilmumab and nivolumab.

Discussion: Primary ARMM is a rare malignancy, especially in African Americans such as our patient, with a poor prognosis. As with our case, presenting symptoms can be unspecific such as anemia. Often patients with ARMM present with rectal bleeding that is attributed to hemorrhoids and endoscopic intervention is not pursued. This is detrimental as it causes a delay in diagnosis. Our patient’s mass was pigmented, but in 29% of cases the mass may be amelanotic resulting in misdiagnosis. Treatment is abdominoperineal resection if there is no evidence of metastasis. Our case highlights the importance of recognizing primary ARMM as a cause of rectal bleeding in patients with an anorectal mass. 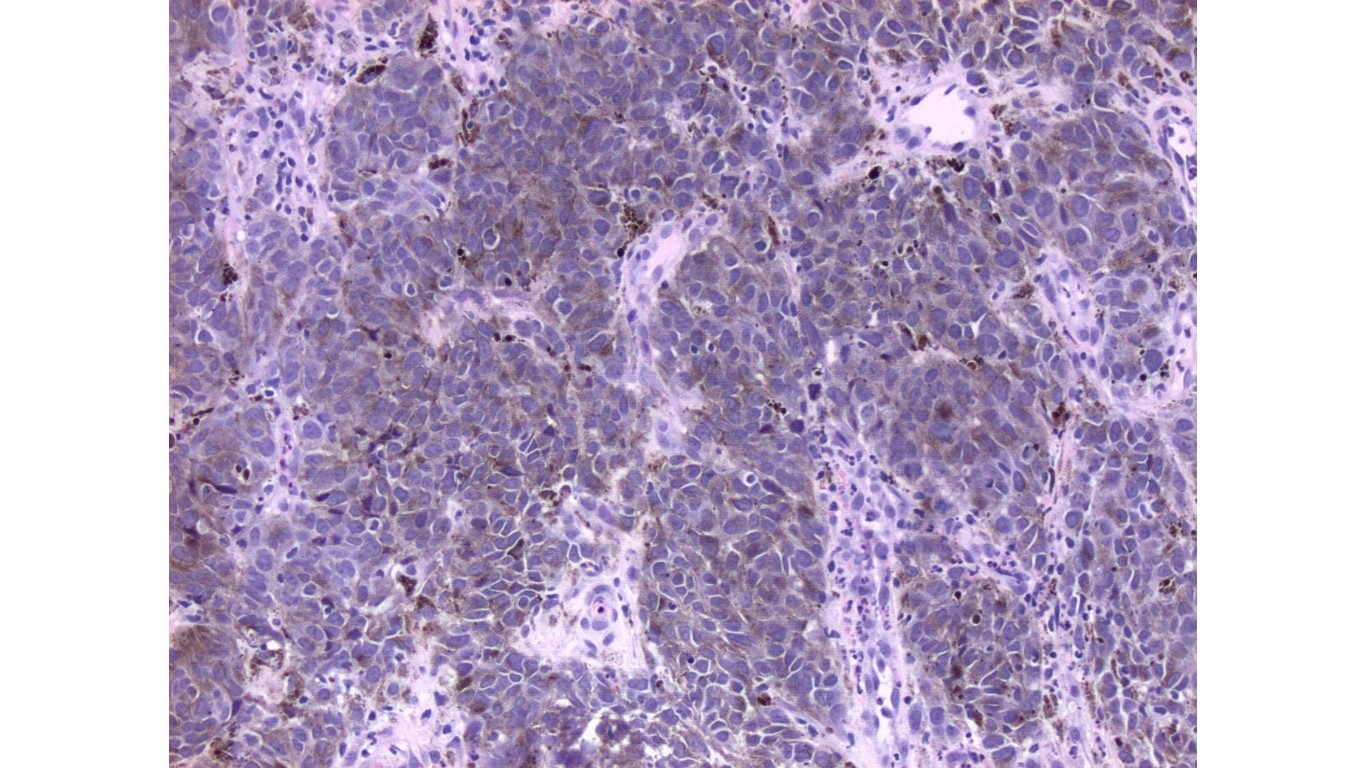 The mass is composed of melanoma cells that formed irregular nests and cords, and manifested enlarged and hyperchromatic nuclei with irregular nuclear contours and prominent nucleoli. The pigments were finely granular and brownish. (H&E, x200) 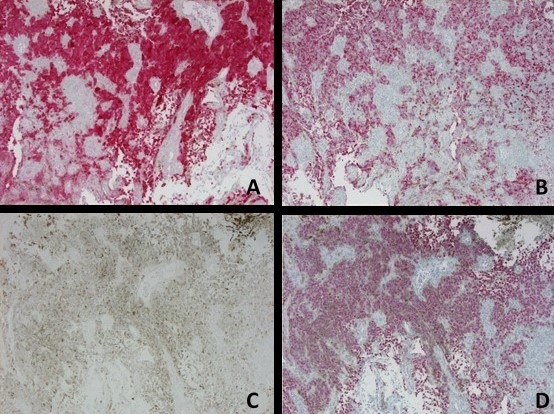