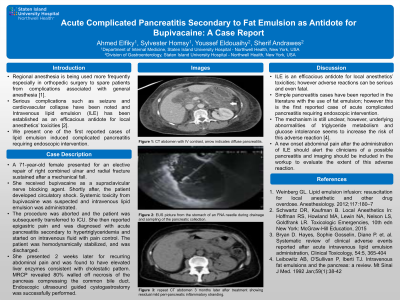 Introduction: Regional anesthesia is being used more frequently especially in orthopedic surgery to spare patients from complications associated with general anesthesia. However, serious complications such as seizure and cardiovascular collapse have been noted and Intravenous lipid emulsion (ILE) has been established as an efficacious antidote for local anesthetics’ toxicities. We present one of the first reported cases of lipid emulsion induced complicated pancreatitis requiring endoscopic intervention

Methods: A 71-year-old female presented to our hospital for an elective repair of right combined ulnar and radial fracture sustained after a mechanical fall. She received bupivacaine as a supraclavicular nerve blocking agent. Shortly after, the patient developed circulatory shock. Systemic toxicity from bupivacaine was suspected and intravenous lipid emulsion was subsequently administrated. The procedure was aborted and the patient was subsequently transferred to the intensive care unit. She then reported epigastric pain and was diagnosed with acute pancreatitis secondary to hypertriglyceridemia and started on intravenous fluid with pain control. The patient was hemodynamically stabilized, and was subsequently discharged. She presented 2 weeks later for recurring abdominal pain and was found to have elevated liver enzymes consistent with cholestatic pattern. MRCP revealed 80% walled off necrosis of the pancreas compressing the common bile duct. Endoscopic ultrasound guided cystogastrostomy was successfully performed. A repeat CT scan of the abdomen with intravenous contrast at a 2 week interval, showed mild residual peri-pancreatic inflammation. At a 3 month follow up, patient was completely asymptomatic

Discussion: ILE is an efficacious antidote for local anesthetics’ toxicities; however adverse reactions can be serious and even fatal. Simple pancreatitis cases have been reported in the literature with the use of fat emulsion; however this is the first reported case of acute complicated pancreatitis requiring endoscopic intervention. A new onset abdominal pain after the administration of ILE should alert the clinicians of a possible pancreatitis and imaging should be included in the workup to evaluate the extent of this adverse reaction 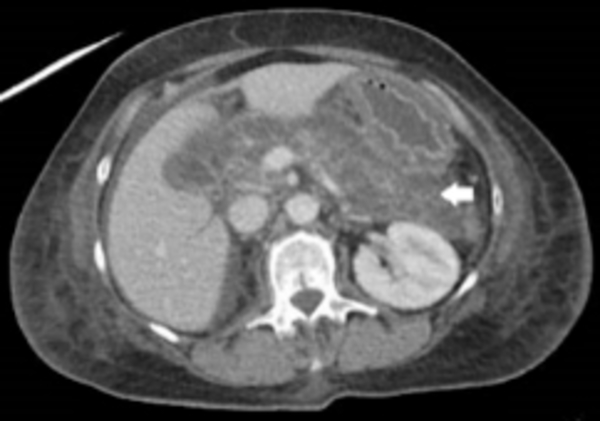 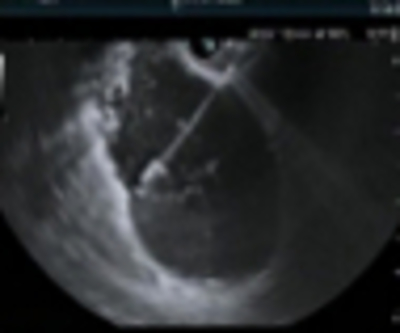 Endoscopic ultrasound picture from the stomach of an fine needle aspiration during drainage and sampling of the pancreatic collection. 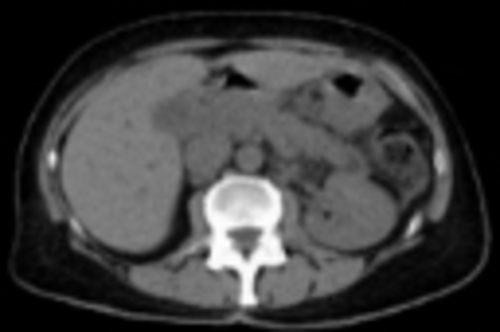