P0883 (S0409). - Correlation of Treatment Options and Complications in Adults With Eosinophilic Esophagitis 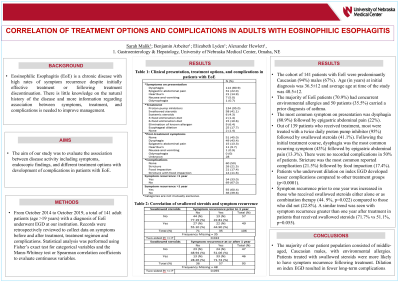 Introduction: Eosinophilic Esophagitis (EoE) is a chronic disease with high rates of symptom recurrence despite initially effective treatment. There is little knowledge on the natural history of the disease. The aim of our study was to evaluate the association between disease activity including symptoms, endoscopic findings, and different treatment options with development of complications in these patients,

Methods: From October 2014 to October 2019, a total of 141 adult patients (age >19 years) with a diagnosis of EoE underwent EGD at our institution. Records were retrospectively reviewed to collect data on symptoms before and after treatment, treatment regimen and complications. Statistical analysis was performed using Fisher’s exact test for categorical variables and the Mann-Whitney test or Spearman correlation coefficients to evaluate continuous variables.

Results: The cohort of 141 patients with EoE were predominantly Caucasian (94%) males (67%). Age (in years) at initial diagnosis was 36.5±12 and average age at time of the study was 40.5±12. The majority of EoE patients (70.9%) had concurrent environmental allergies and 50 patients (35.5%) carried a prior diagnosis of asthma. The most common symptom on presentation was dysphagia (80.9%) followed by epigastric abdominal pain (22%). Out of 139 patients who received treatment, most were treated with a twice daily proton pump inhibitor (95%) followed by swallowed steroids (41.1%). Following the initial treatment course, dysphagia was the most common recurring symptom (43%) followed by epigastric abdominal pain (13.3%). There were no recorded complications in 50% of patients. Stricture was the most common reported complication (21.5%) followed by food impaction (17.4%). Patients who underwent dilation on index EGD developed lesser complications compared to other treatment groups (p< 0.0001). There was no correlation between the change in eosinophil count and change in symptoms from the index to follow up EGD (r=0.004). Symptom recurrence prior to one year was increased in those who received swallowed steroids either alone or as combination therapy (44. 9%, p=0.022) compared to those who did not (22.8%). A similar trend was seen with symptom recurrence greater than one year after treatment in patients that received swallowed steroids (71.7% vs 51.1%, p=0.055). 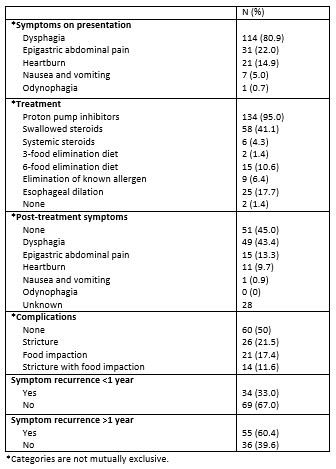 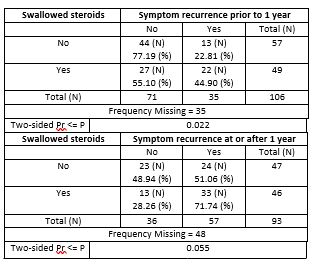