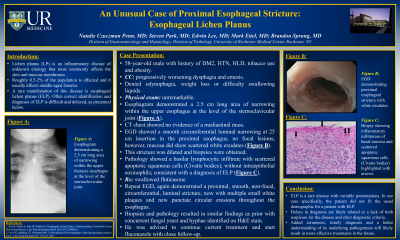 Introduction: Lichen planus (LP) is an inflammatory disease of unknown etiology that most commonly affects the skin and mucous membranes. Roughly 0.5-2% of the population is affected and it usually affects middle-aged females. A rare manifestation of this disease is esophageal lichen planus (ELP). Often correct identification and diagnosis of ELP is difficult and delayed, as presented below.

Methods: A 58-year-old male with a history of DM2, HTN, HLD, tobacco use and obesity presented with complaints of progressively worsening dysphagia and emesis. He denied odynophagia, weight loss or difficulty swallowing liquids. His physical exam was unremarkable. An esophagram demonstrated a 2.5 cm long area of narrowing within the upper esophagus at the level of the sternoclavicular joint. A CT chest showed no evidence of a mediastinal mass. An EGD showed a smooth circumferential luminal narrowing at 25 cm insertion in the proximal esophagus. There were no focal lesions; however, the mucosa did show scattered white exudates. This area could not be traversed with the endoscope and the lumen was ~ 8 mm in diameter. The stricture was dilated and biopsies were obtained. Of note, both the stomach and duodenum appeared normal. Pathology showed a basilar lymphocytic infiltrate with scattered apoptotic squamous cells (Civatte bodies); no intraepithelial eosinophils were identified. These findings were consistent with a diagnosis of ELP and the patient was started on swallowed fluticasone. Repeat EGD, again demonstrated a proximal, smooth, non-focal, circumferential, luminal stricture. Multiple small white plaques with new punctate circular erosions were appreciated throughout the proximal and mid-esophagus; biopsies were again obtained. Pathology resulted in similar findings as prior with the addition of concurrent fungal yeast and hyphae identified on H&E stain. He was advised to continue current treatment and start fluconazole with close follow-up.

Discussion: ELP is a rare disease with variable presentations. In our case specifically, the patient did not fit the usual demographic for a patient with ELP and he had no other manifestations of LP. Delays in diagnosis are likely related to a lack of both suspicion for the disease and strict diagnostic criteria. ELP is difficult to treat and often requires trials of multiple different medications. Added awareness, timely diagnosis and a better understanding of its underlying pathogenesis will likely result in more effective treatments in the future. 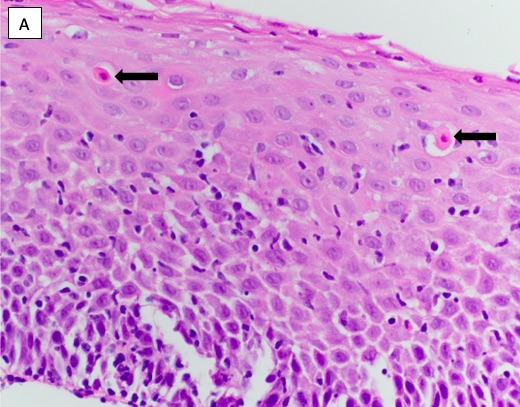 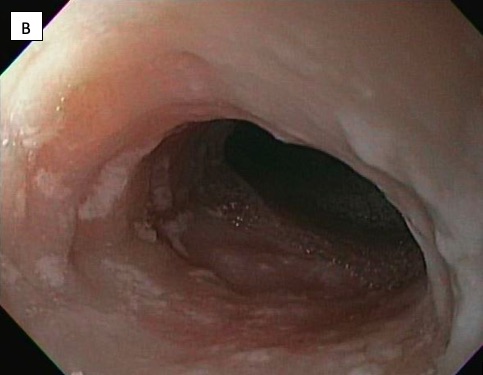