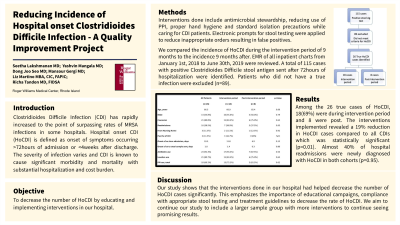 Introduction: Clostridioides Difficile Infection (CDI) has rapidly increased to the point of surpassing rates of MRSA infections in some hospitals. Hospital onset CDI (HoCDI) is defined as onset of symptoms occurring after 72 hours of admission or less than 4 weeks after discharge from a healthcare facility. The severity of infection varies and CDI is known to cause significant morbidity and mortality with substantial hospitalization and cost burden.

Methods: We conducted a prospective cohort study of inpatients, aiming to decrease the number of HoCDI by educating and implementing interventions in our hospital. These include antimicrobial stewardship, reducing use of proton pump inhibitors, proper hand hygiene and standard isolation precautions while caring for CDI patients by medical staff. Electronic prompts for stool testing were also applied to reduce inappropriate orders resulting in false positives. We compared the incidence of HoCDI during the intervention period of 9 months to the incidence 9 months after. Electronic Medical Records of all inpatient charts from January 1st, 2018 to June 30th, 2019 were reviewed. A total of 115 cases with positive Clostridioides Difficile stool antigen sent after 72hours of hospitalization were identified. Patients who did not have a true infection and thought to be carriers were excluded (n=89).

Results: Among the 26 true cases of HoCDI, 18(69%) were during intervention period and 8 were post. Mean age was 66.5years, 80%(n=21) were white and 54%(n=14) were male. The interventions implemented revealed a 19% reduction in HoCDI cases compared to all CDIs which was statistically significant (p=0.01). Almost 40% of hospital readmissions were newly diagnosed with HoCDI in both cohorts (p=0.95). Only 3 patients had a past history of CDI in the intervention period while none were observed in post. In the intervention period, 94%(n=17) of patients received antibiotics and 72%(n=13) were on PPI; while 88%(n=7) received antibiotics and 63%(n=5) were on PPI in the post cohort. There was however no statistical significance seen among them respectively (p=0.54; p=0.62).

Discussion: Our study shows that the interventions done in our hospital had helped decrease the number of HoCDI cases significantly. This emphasizes the importance of educational campaigns, compliance with appropriate stool testing and treatment guidelines to decrease the rate of HoCDI. We aim to continue our study to include a larger sample group with more interventions to continue seeing promising results.

Figure 1: The pop-up window on EMR when ordering for Clostridioides difficile testing 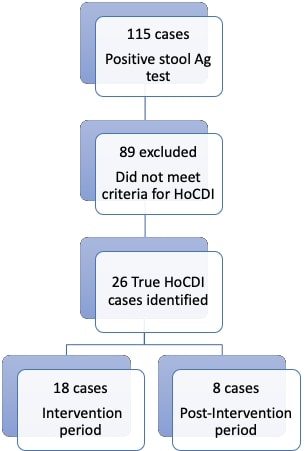 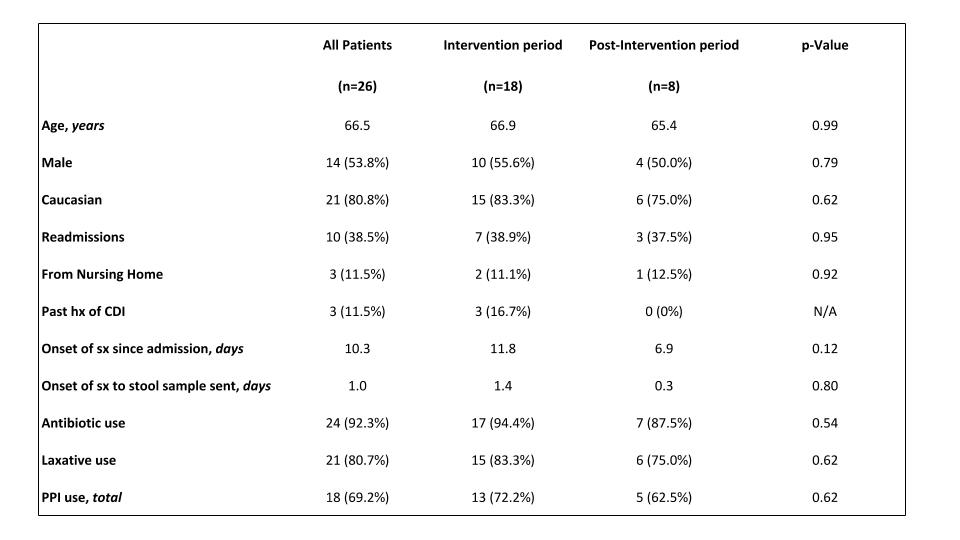