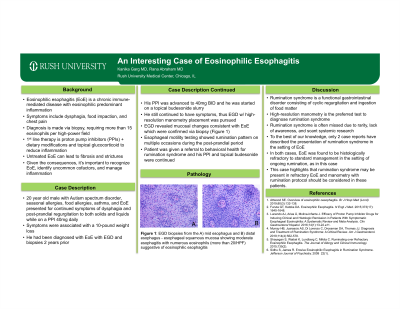 Introduction: Eosinophilic esophagitis (EoE) is a chronic immune-mediated disease with eosinophilic predominant inflammation. Symptoms include dysphagia, food impaction, and chest pain. Diagnosis is made via biopsy, requiring more than 15 eosinophils per high-power field. First line therapy is proton pump inhibitors (PPIs) along with dietary modifications and topical glucocorticoid to reduce inflammation. Untreated EoE can lead to fibrosis and strictures, requiring endoscopic dilatation. Given the consequences, it is important to recognize EoE, identify uncommon cofactors, and manage inflammation. We present a case of rumination syndrome found on manometry in a patient with unresolved EoE.

Methods: A 20-year-old male with Autism spectrum disorder, seasonal allergies, food allergies, asthma, and EoE presented for a second opinion for continued symptoms of dysphagia and post-prandial regurgitation to both solids and liquids along with a 10-pound weight loss while on a PPI 40 mg daily. He had been diagnosed with EoE with EGD and biopsies 2 years prior unresponsive to PPI. His PPI was advanced to 40 mg twice daily and he was started on a topical budesonide slurry. Because he continued to have significant symptoms an EGD was performed with high-resolution manometry catheter placement. EGD revealed mucosal changes consistent with EoE, confirmed via biopsy. Esophageal motility testing showed rumination pattern on multiple occasions during the post-prandial period. The patient was given a referral to behavioral health for rumination syndrome and his PPI and topical budesonide were continued.