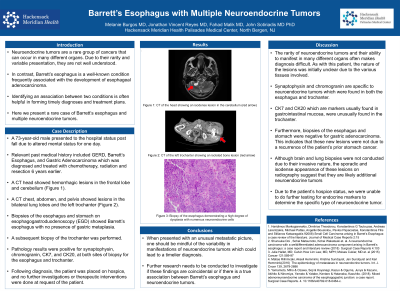 Introduction: Neuroendocrine tumors are a rare group of cancers that can occur in many different organs. Due to their rarity and variable presentation, they are not well understood. In contrast, Barrett’s esophagus is a well-known condition frequently associated with the development of esophageal adenocarcinoma. Identifying an association between two conditions is often helpful in forming timely diagnoses and treatment plans. Here we present a rare case of Barrett’s esophagus and multiple neuroendocrine tumors.

Methods: A 73-year-old male presented to the hospital status post fall due to altered mental status. Relevant past medical history included GERD, Barrett’s esophagus, and gastric adenocarcinoma which was treated with surgery and chemoradiation 6 years prior. Head CT revealed lesions in the frontal lobe and the cerebellum (Fig. 1). Further investigation with a CT chest, abdomen, and pelvis showed additional lesions in the bilateral lung lobes and the left trochanter (Fig. 2). Biopsies of the esophagus and stomach on esophagogastroduodenoscopy (EGD) showed Barrett’s esophagus with no presence of gastric metaplasia (Fig. 3). A subsequent biopsy of the trochanter was performed. Pathology results were positive for synaptophysin, chromogranin, CK7, and CK20 at both biopsy sites. Ultimately, the patient was placed on hospice.

The rarity of neuroendocrine tumors and their ability to manifest in many different organs often makes diagnosis difficult. As with this patient, the nature of the lesions was initially unclear due to the various tissues involved. Synaptophysin and chromogranin are specific to neuroendocrine tumors which were found in both the esophagus and trochanter. CK7 and CK20 which are markers usually found in gastrointestinal mucosa, were unusually found in the trochanter. Furthermore, biopsies of the esophagus and stomach were negative for gastric adenocarcinoma. This indicates that these new lesions were not due to a recurrence of the patient’s prior stomach cancer. Although brain and lung biopsies were not conducted due to their invasive nature, the sporadic and isodense appearance of these lesions on radiography suggest that they are likely additional neuroendocrine tumors. Further research is needed to determine if these findings are coincidental or if there is a true association between Barrett’s esophagus and neuroendocrine tumors, as this may allow for prompt diagnosis and treatment. 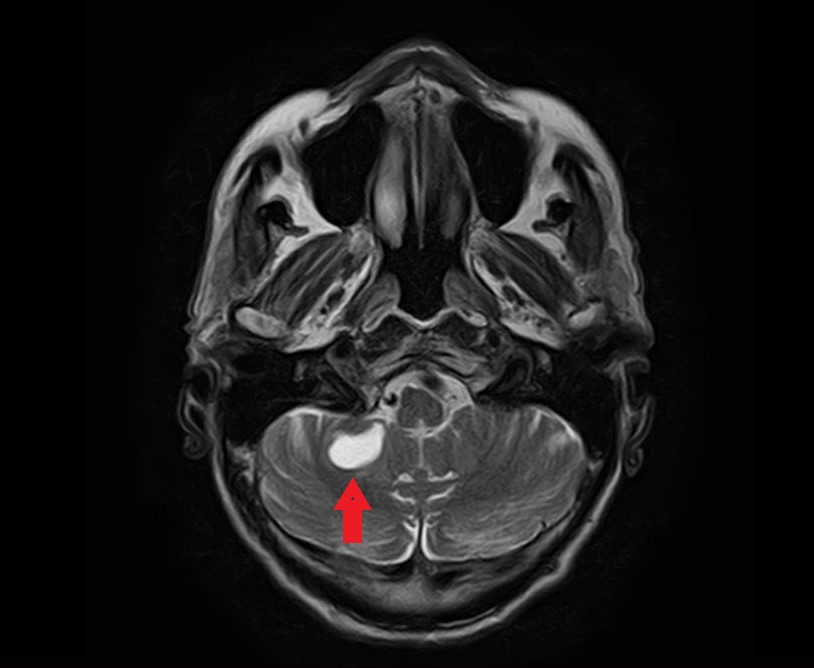 Figure 1. CT of the head showing an isodense lesion in the cerebellum as marked by the red arrow. 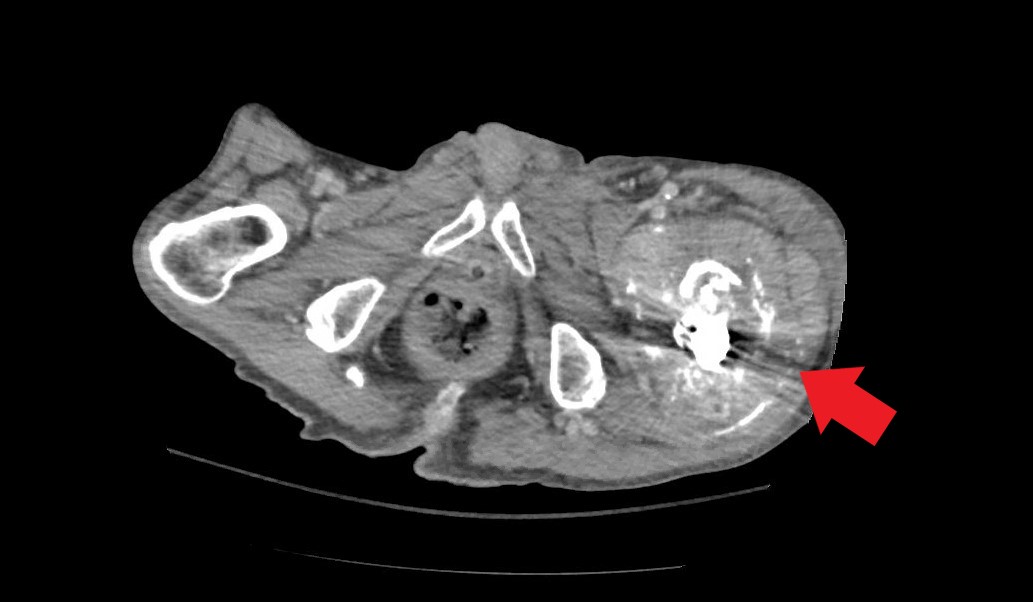 Figure 2. CT of the left trochanter showing an isolated bone lesion as marked by the red arrow. 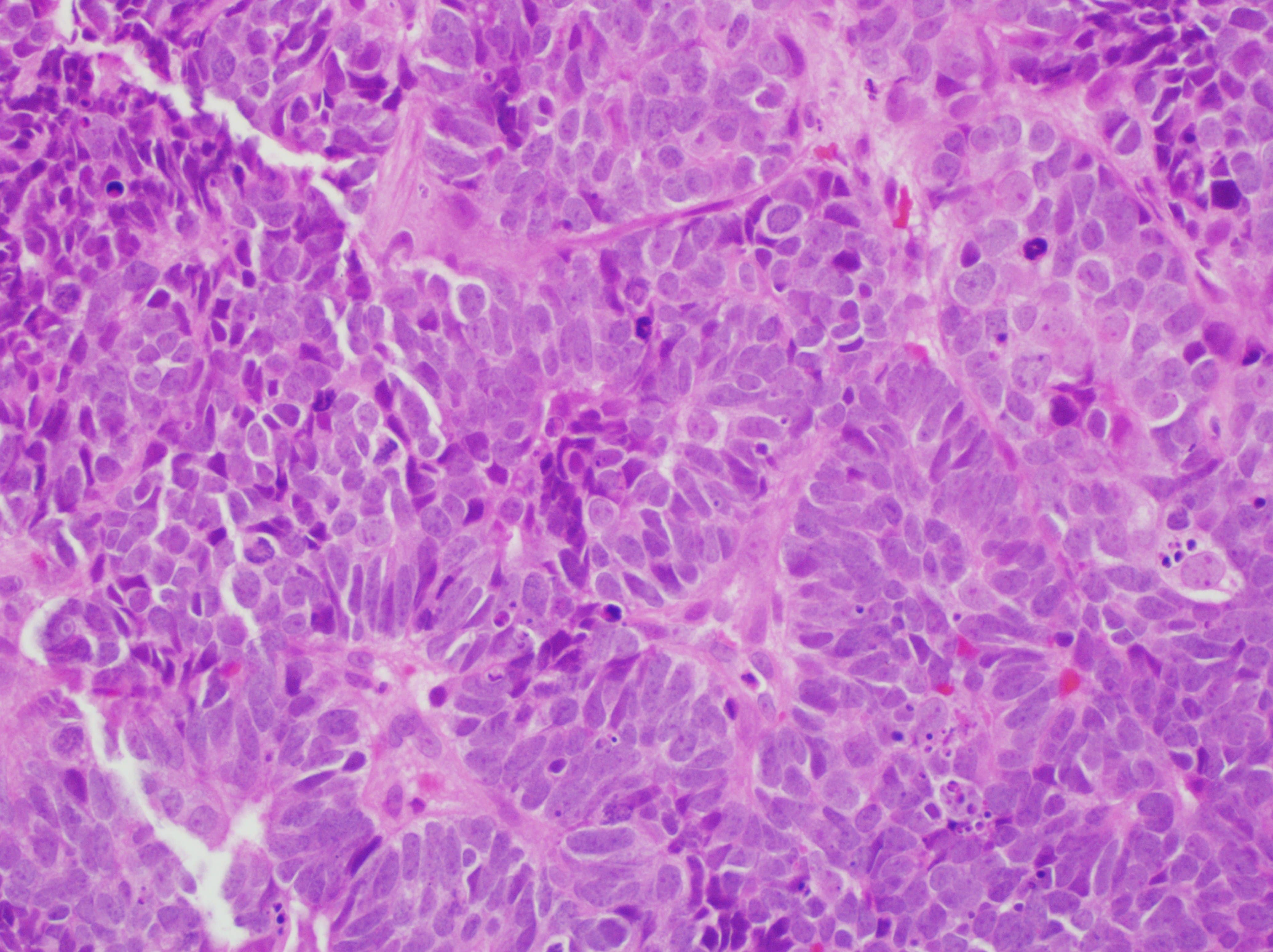 Figure 3. Biopsy of the esophagus demonstrating a high degree of dysplasia with numerous neuroendocrine cells.