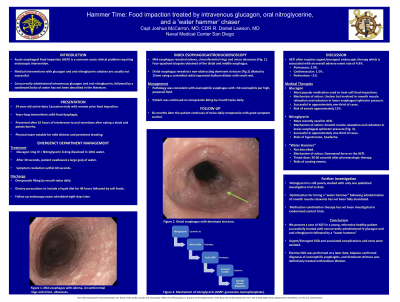 Introduction: Acute esophageal food impaction (AEFI) is a common acute clinical problem that often requires endoscopic intervention. Medical interventions with glucagon and oral nitroglycerin solution have been described but are usually not successful. We present a case of soft food impaction successfully treated with intravenous glucagon, oral nitroglycerin and a bolus of water.

Methods: A 24-year-old male with intermittent solid-food dysphagia presented to the Emergency Department (ED) with 10 hours of intolerance to oral secretions since eating a steak and potato burrito. On physical exam the patient was uncomfortable and drooling. He was given glucagon 1-mg intravenously and nitroglycerin 0.4-mg dissolved in 10-ml of water concurrently. After 30-seconds he was instructed to swallow a large gulp of water (“water hammer”) and within seconds his symptoms resolved with no side effects. He was discharged on high dose omeprazole. Esophagogastroduodenoscopy with esophageal biopsies eight days later revealed findings consistent with eosinophilic esophagitis (EoE) (Fig. 1) and a dominant stricture in the distal esophagus (Fig. 2) which was balloon dilated to 15-mm. Esophageal biopsies confirmed our suspicion of EoE which showed up to 50 eosinophils per high-powered field and micro-abscesses.

Discussion: Patients presenting with AEFI often require endoscopic therapy which is associated with an overall adverse event rate of 4.9%. Pulmonary and cardiovascular complications are the most common, occurring in 1.5% and 2.9%, respectively.
Glucagon, the most popular medication used to treat soft food impactions, works by relaxing the smooth muscle of the esophagus which leads to a reduction in the lower esophageal sphincter pressure thereby reducing the resistance to food bolus allowing it to pass. But glucagon succeeds in passage of food in only about a third of cases. Another smooth muscle relaxant, nitroglycerin, which is dissolved in water and swallowed by the patient, has more recently been described and shown to work in about a third of patients (Fig. 3).
In this case involving a young otherwise healthy patient who was later found to have EoE, we successfully treated an acute soft food impaction of the esophagus by combining two smooth muscle relaxants concurrently (intravenous glucagon and oral nitroglycerin dissolved in water) and a bolus of swallowed water 30 seconds later (“water hammer”). This is the first reported case of esophageal soft food impaction managed with this therapeutic technique. 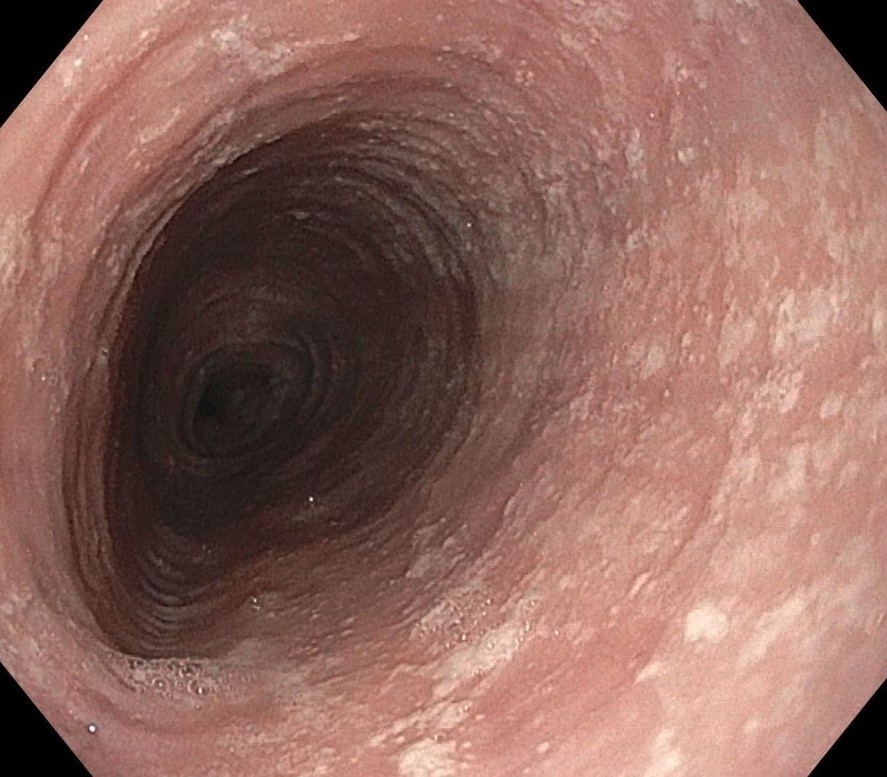