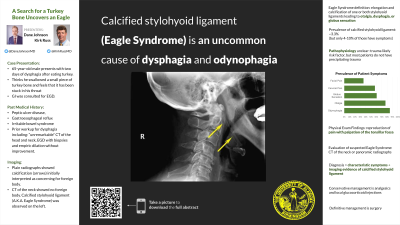 Methods: A 65-year-old male with GERD was seen in consultation in the ED for two days of dysphagia and concern for esophageal foreign body. He reported swallowing a turkey bone and subsequently developed a persistent globus sensation and pain localizing to the right side of neck just above the sternal notch. Review of electronic medical record revealed prior workup for dysphagia including: unremarkable CT of the head and neck, and EGD with normal esophageal biopsies and empiric dilation without relief of symptoms. Physical examination in the emergency department did not reveal any abnormality in the posterior oropharynx, cervical lymphadenopathy, or crepitus. Plain radiograph interpretation in the ED raised concern for possible foreign body in the hypopharynx (Arrow, FIGURE 1). Subsequent review of plain radiographs and prior CT by radiology revealed bilateral calcification of stylohyoid ligaments, right greater than left, consistent with a diagnosis of Eagle Syndrome. EGD was deferred, patient was discharged home, and Otolaryngology was consulted for outpatient evaluation.

Discussion: Eagle syndrome was first described by Watt W. Eagle in 1937. The prevalence of has been reported as 3.3%, but only 4-10% of patients develop symptoms. The pathophysiology is unclear. Preceding head and neck trauma may be a risk factor, however, this history is lacking in most patients with Eagle syndrome. In a review of 61 cases of Eagle syndrome by Ceylan et al, the most common symptoms included odynophagia (85.2%), otalgia (77%), globus sensation (60.6%), cervical pain (57.3%), and facial pain (36%). Diagnosis is made based on clinical symptoms and radiographic confirmation of ossified stylohyoid ligament. Plain radiographs are usually sufficient to confirm Eagle Syndrome, although CT of the neck can be used to further characterize the anatomy and rule out other causes of dysphagia. Eagle syndrome can be managed conservatively with analgesics and local steroid injections but definitive treatment is surgical. Case reports of Eagle syndrome are uncommon in the gastroenterology literature. As gastroenterologists are commonly consulted to evaluate dysphagia, odynophagia, and globus sensation it is important to be familiar with Eagle syndrome and its management. 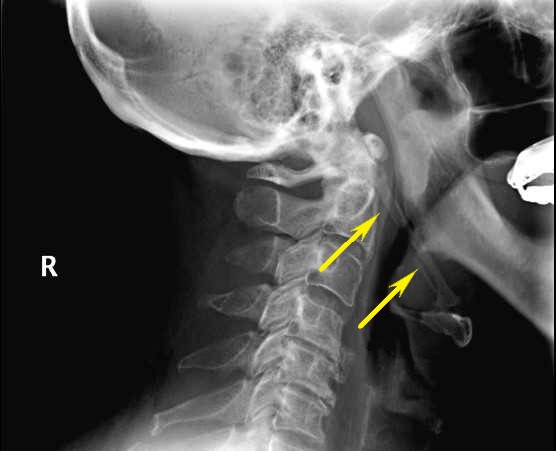