P1251 (S2071). - Severe Methemoglobinemia After Benzocaine Spray Use During Endoscopy 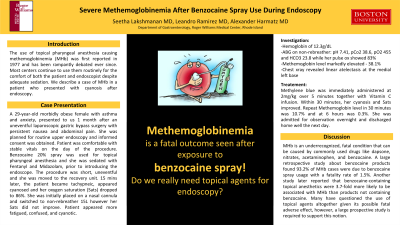 Introduction: The use of topical pharyngeal anesthesia causing methemoglobinemia (MHb) was first reported in 1977 and has been rampantly debated ever since. Most centers continue to use them routinely for the comfort of both the patient and endoscopist despite adequate sedation. We describe a case of MHb in a patient who presented with cyanosis after endoscopy.

Methods: A 29-year-old morbidly obese female with asthma and anxiety, presented to us 1 month after an uneventful laparoscopic gastric bypass surgery with persistent nausea and abdominal pain. She was planned for routine upper endoscopy and informed consent was obtained. Patient was comfortable with stable vitals on the day of the procedure. Benzocaine 20% spray was used for topical pharyngeal anesthesia and she was sedated with Fentanyl and Midazolam, prior to introducing the endoscope. The procedure was short, uneventful and she was moved to the recovery unit. 15 mins later, the patient became tachypneic, appeared cyanosed and her oxygen saturation (Sats) dropped to 86%. She was initially placed on a nasal cannula and switched to non-rebreather 15L however her Sats did not improve. Patient appeared more fatigued, confused, and cyanotic. Labs revealed hemoglobin of 12.3g/dL and arterial blood gas on the non-rebreather was pH 7.41, pCo2 38.6mmHg, pO2 455mmHg and HCO3 23.8mEq/L while her pulse oximetry was still showing Sats of 83%. Chest xray revealed linear atelectasis at the medial left base. Methemoglobin level was markedly elevated at 38.1%. Methylene blue was immediately administered at 2mg/kg over 5 minutes together with Vitamin C infusion. Within 30 minutes, her cyanosis and Sats improved. Repeat Methemoglobin level in 30 minutes was 10.7% and at 6 hours was 0.3%. She was admitted for observation overnight and discharged home well the next day.

Discussion: MHb is an underrecognized, fatal condition that can be caused by commonly used drugs like dapsone, nitrates, acetaminophen, and benzocaine. A large retrospective study about benzocaine products found 93.2% of MHb cases were due to benzocaine spray usage with a fatality rate of 1.5%. Another study later reported that benzocaine-containing topical anesthetics were 3.7-fold more likely to be associated with MHb than products not containing benzocaine. Many have questioned the use of topical agents altogether given its possible fatal adverse effect, however, a large prospective study is required to support this notion.