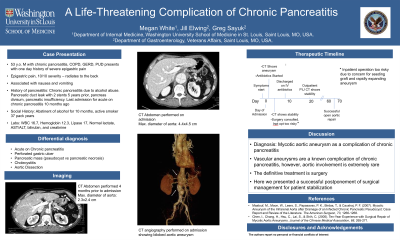 Introduction: Vascular complications are a rare but serious manifestation of pancreatitis. The mechanism is thought to be due to inflammation and necrosis from local spread of proteolytic enzymes, compressive forces, or local infection. Splanchnic and gastroduodenal vessels are the most common given their proximity, but in rare cases, the aorta is affected.

Methods: A 53-year-old white male with long-standing chronic alcohol induced pancreatitis complicated by pancreatic ascites and pseudocysts presented with one day history of epigastric pain, nausea and emesis. Other history included gastroesophageal reflux, peptic ulcer disease complicated by a gastric bleed 4 months prior, and hypertension. He reported 37 pack years of tobacco use and marijuana use. He had a history of alcohol abuse but had been abstinent for the past 10 months. He denied intravenous drug use.
His exam was notable for moderate distress due to pain, thin appearing (BMI 18), poor dentition, and epigastric tenderness to palpation without rebound or guarding. Labs were notable for a mild leukocytosis (WBC 16.7 g/L) and anemia (HGB 12.3 g/dL). His lipase was within normal limits (17 U/L). A CT scan revealed a bilobed aortic aneurysm (4.4x4.5 cm) with wall thickening and surrounding fluid and tissue suggestive of a mycotic aneurysm (Figures 1&2). Infectious workup including blood, fungal, and urine cultures, and bartonella and Q fever serologies was unrevealing. Comparison to a CT scan done 4 months prior showed periaortic inflammation and caliber of 2.4 cm (Figure 3).
The patient was started on empiric antibiotics and surgery was consulted. Given the rapid expansion and complexity, he was deemed high-risk and completed outpatient antibiotics prior to surgery. He returned two months later for a planned open repair of the aneurysm with a rifampin-soaked graft. Intraoperative cultures and pathology were unrevealing for infections etiology. On outpatient follow up, his symptoms improved and had no signs of ongoing infection. He was placed on suppressive doxycycline and continues to do well 17 months later.

Discussion: Aortic pseudoaneurysms are a rare complication of pancreatitis with both infected and non-infected cases being reported in literature. Surgery is the definitive management, often done promptly upon diagnosis. Here we present a case of mycotic aortic aneurysm associated with chronic pancreatitis in which the surgical management was successfully postponed for infection control and stabilization of the patient. 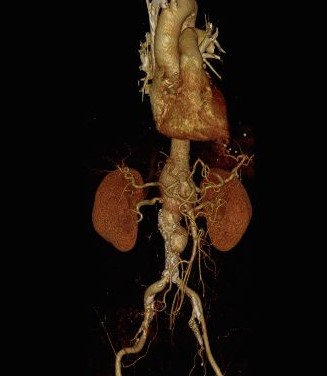 CT angiography performed on admission showing bilobed aortic aneurysm above and below the renal arteries. 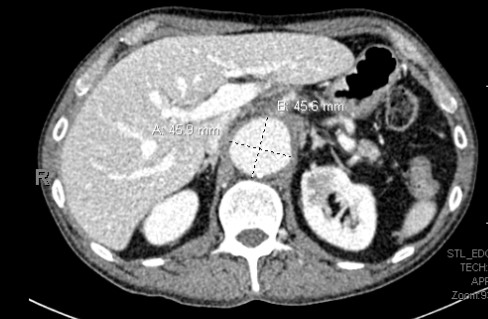 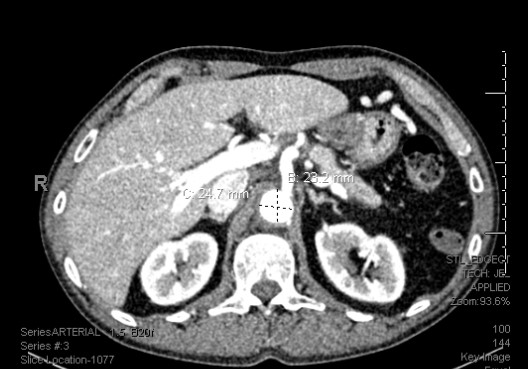