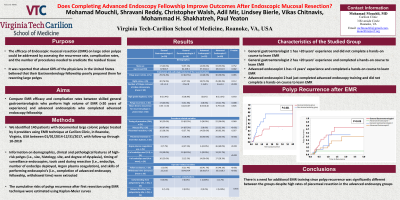 Introduction: The efficacy of Endoscopic mucosal resection (EMR) on large colon polyps could be addressed by assessing the recurrence rate, complication rates, and the number of procedures needed to eradicate the residual tissue. It was reported that about 60% of the physicians in the United States believed that their Gastroenterology fellowship poorly prepared them for resecting large polyps.

Results: One hundred and forty patients identified (Mean age, 64.1±11.2 yrs; 47.1% males). Fifty-five polyps (39.3%) were removed by 2 skilled gastroenterologists (group 1 and group 2) and 85 (60.7%) were removed by advanced endoscopists (group 3 and group 4). Most of the polyps resected were located in the right colon (63.6%) and roughly half of the polyps were removed in piecemeal fashion. At follow-up endoscopy, groups 3 and 4 had lower polyp recurrence rates. When we compared the groups, the advanced endoscopy group used piecemeal resection, non-lifting EMR, and fellow assistance more frequently. The other groups used endoclips to close small defects post-polypectomy more frequently. The use of endoclips and argon plasma coagulation, withdrawal time, and complication rates varied between the groups. The median recurrence after polypectomy was significantly different between the groups (0.88 and 1.03 yrs for groups 1 and 2 vs. 3.99 yrs for group 4, p=0.03) (figure 1).

Discussion: There is a need for additional EMR training since polyp recurrence was significantly different between the groups despite high rates of piecemeal resection in the advanced endoscopy groups. 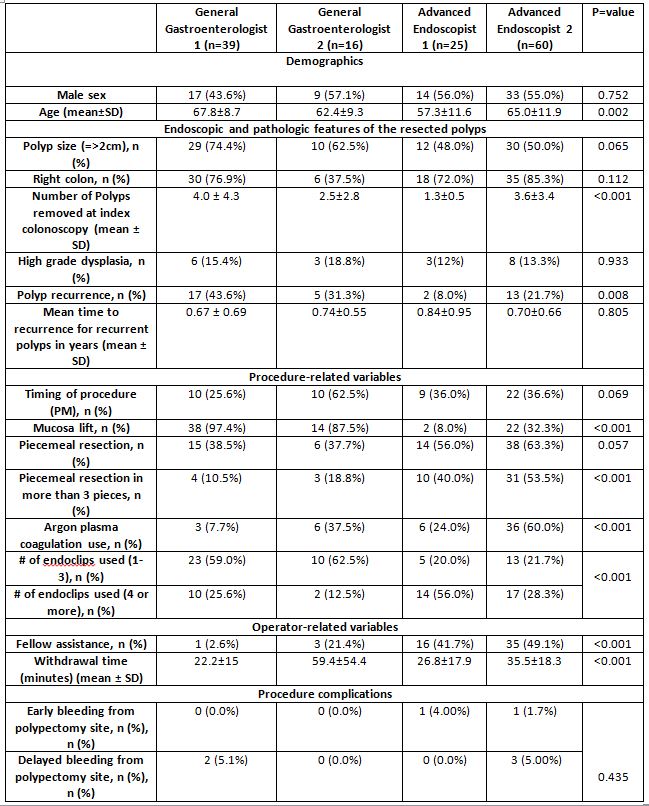