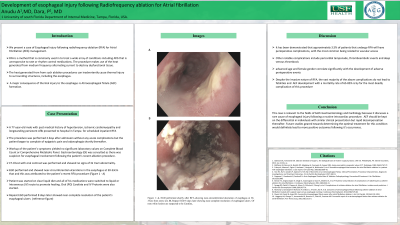 Introduction: We present a case of esophageal injury following radiofrequency ablation (RFA) for Atrial Fibrillation (Afib) management. Despite being a relatively rare occurrence, this complication can have dire consequences if there is perforation of the esophagus with subsequent fistula formation to the left atrium, also known as Atrioesophageal fistula. Following a recent RFA, our patient’s main complaint was dysphagia with epigastric pain. Due to a high degree of suspicion, we were able to work closely with the Gastroenterology (GI) department in order to determine the most likely etiology of our patient’s symptoms with appropriate management in a timely manner.

Methods: A 77-year-old male with a past medical history of hypertension, ischemic cardiomyopathy and longstanding persistent Afib presented to our hospital for his scheduled inpatient RFA to manage his persistent Afib. The procedure was performed 2 days after admission without any acute complications but the patient began to complain of epigastric pain and odynophagia shortly thereafter.

Workup of the patient’s symptoms yielded no significant laboratory values on CBC or CMP. GI was consulted as there was suspicion for esophageal involvement following the patient’s recent ablation procedure. Per GI recommendations, CT- chest with oral contrast was performed and showed no signs of GI tract abnormality. GI eventually performed EGD that showed near-circumferential ulcerations in the esophagus at 30-33cm and this was attributed to the patient’s recent RFA procedure. The patient was started on a clear liquid diet and all of his medications were switched to liquid or Intravenous (IV) route to promote healing. Oral (PO) Carafate and IV Protonix were also started. Repeat EGD performed 8 days later showed near-complete resolution of the patient’s esophageal ulcers. Patient’s diet was steadily advanced until he could tolerate solids and he was eventually discharged  with close follow-up with GI as an outpatient. He is currently scheduled to undergo repeat surveillance EGD 4 months after discharge.

Discussion: This case is relevant to the fields of both Gastroenterology and Cardiology because it discusses a rare cause of esophageal injury following a routine intracardiac procedure.  Atrio-esophageal fistua should be kept on the differential in individuals with a recent RFA, experiencing symptoms of epigastric pain and odynophagia. 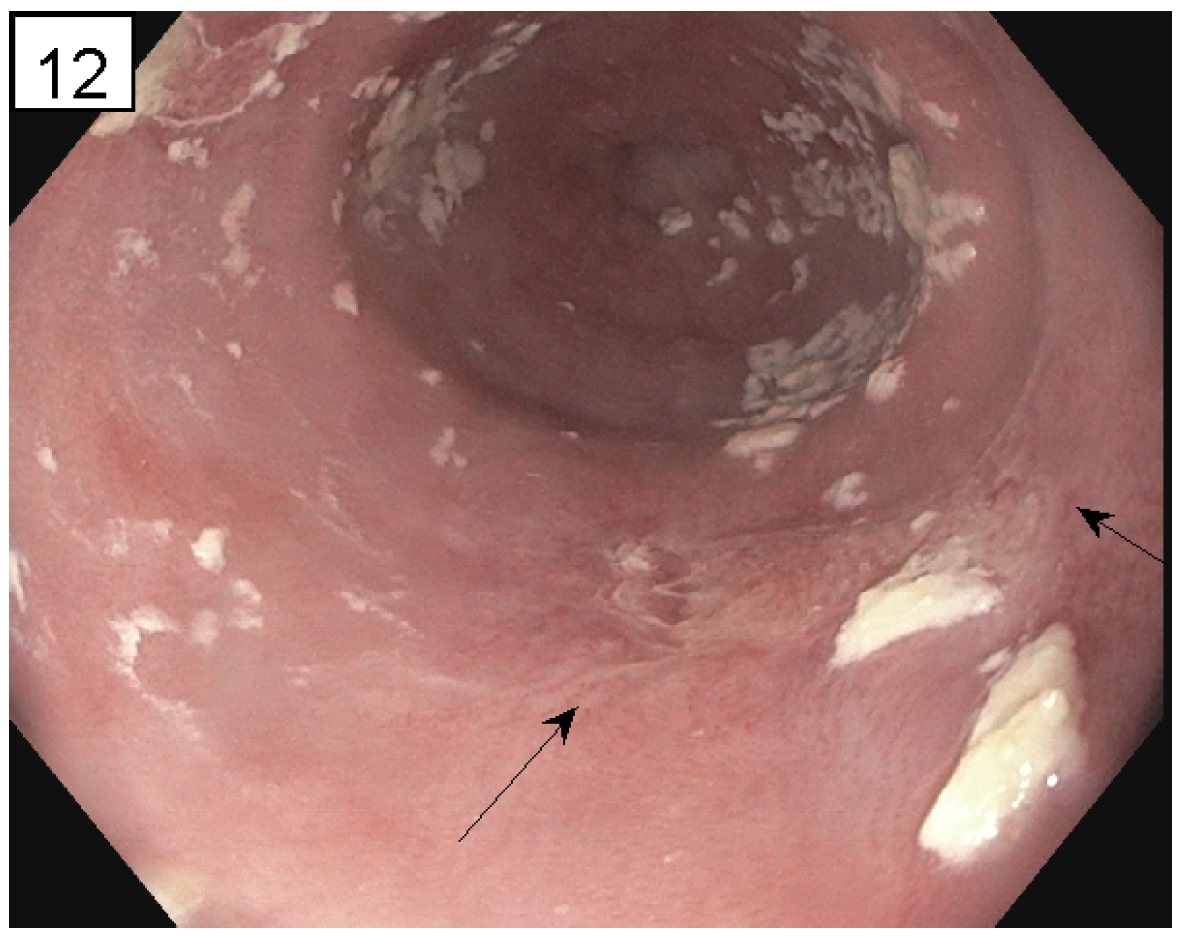