P0946 (S1895). - A Case of Esophageal Epidermoid Metaplasia in a Patient With Recurrent Esophageal Strictures 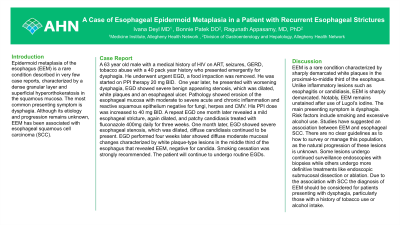 Introduction: Epidermoid metaplasia of the esophagus (EEM) is a rare condition described in very few case reports, characterized by a dense granular layer and superficial hyperorthokeratosis in the squamous mucosa. The most common presenting symptom is dysphagia. Although its etiology and progression remains unknown, EEM has been associated with esophageal squamous cell carcinoma (SCC).

Methods: A 63-year-old male with a medical history of HIV on ART, seizures, GERD, tobacco abuse with a 40 pack-year history presented emergently for dysphagia. He underwent urgent EGD, a food impaction was removed. He was started on PPI therapy 20 mg BID. One year later, he presented with worsening dysphagia, EGD showed severe benign-appearing stenosis, which was dilated, white plaques and an esophageal ulcer. Pathology showed erosion of the esophageal mucosa with moderate to severe acute and chronic inflammation and reactive squamous epithelium negative for fungi, herpes, and CMV. His PPI dose was increased to 40 mg BID. A repeat EGD one month later revealed a mild esophageal stricture, again dilated, and patchy candidiasis treated with fluconazole 400mg daily for three weeks. One month later, EGD showed severe esophageal stenosis, which was dilated, diffuse candidiasis continued to be present. EGD performed four weeks later showed diffuse moderate mucosal changes characterized by white plaque-type lesions in the middle third of the esophagus (Fig.1) that revealed EEM, negative for candida. Smoking cessation was strongly recommended. The patient will continue to undergo routine EGDs.

Discussion: EEM is a rare condition characterized by sharply demarcated white plaques in the proximal-to-middle third of the esophagus. Unlike inflammatory lesions such as esophagitis or candidiasis, EEM is sharply demarcated. Notably, EEM remains unstained after use of Lugol’s iodine. The main presenting symptom is dysphagia. Risk factors include smoking and excessive alcohol use. Studies have suggested an association between EEM and esophageal SCC. There are no clear guidelines as to how to survey or manage this population, as the natural progression of these lesions is unknown. Some lesions undergo continued surveillance endoscopies with biopsies while others undergo more definitive treatments like endoscopic submucosal dissection or ablation. Due to the association with SCC the diagnosis of EEM should be considered for patients presenting with dysphagia, particularly those with a history of tobacco use or alcohol intake.