P0148 (S1392). - A Souvenir to Remember: A Rare Case of Primary Hepatolithiasis in a White Active Duty Sailor 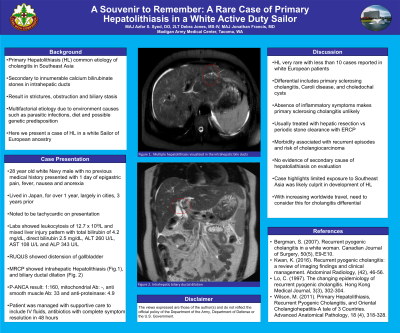 Introduction: Primary Hepatolithiasis (HL), is a condition defined by de novo formation of pigmented calcium bilirubinate stones in the intrahepatic bile ducts. The exact mechanism is unknown, but it is likely multifactorial due to ethnic predisposition and environmental exposures such as diet and bacterial/parasitical infections. The most common clinical manifestation is recurrent bouts of cholangitis resulting in sclerosing cholangitis and parenchymal fibrosis. HL is endemic to South East Asia (SEA), and when recorded in the west it is nearly exclusive to Asian immigrants. Here we present a case of HL in a Caucasian Sailor with limited exposure to SEA.

Methods: A 28 year old white Navy male with no previous medical history, presented with 1 day history of acute onset epigastric pain, fevers, chills, anorexia and nausea. The pain was described as being sharp and localized in his right upper quadrant. He reported a previous similar self-limited episode 1 month prior. Also noted to have dark-colored urine with pale appearing stools. History notable for very rare EtOH and no tobacco use. He had been stationed in Japan for 2 years but departed in 2016; 3 years prior to presentation. His ROS was otherwise negative. His vitals were unremarkable except for a HR in the 90’s. His labs were notable for a WBC of 12.7 cells/microliter, total bilirubin 4.2 mg/dL, direct bilirubin 2.5 mg/dL, ALT 260 U/L, AST 108 U/L and ALP 343 U/L. Lipase was normal. RUQUS revealed distension of the gallbladder with no cholelithiasis or choledocholithiasis. MRCP revealed innumerable small stones within the intrahepatic biliary ducts resulting in biliary ductal dilatation and ductal hyperenhancement. He was treated supportively with IV fluids, pain control with fentanyl and ondansetron with complete resolution of symptoms within 48 hours. Based on the patient’s clinical presentation, travel history, and MRCP findings, we believe this to be a case of HL.

Discussion: HL is a very rare disease process outside SEA. Western cases of hepatolithiasis are more often secondary and attributable to bile duct malformations (Caroli disease or choledochal cysts), primary sclerosing cholangitis, or postoperative/posttraumatic strictures. The risk of progressive disease and late complications such as cholangiocarcinoma remain unclear in this patient. This case is unique as it suggests that HL can occur through limited endemic exposure. 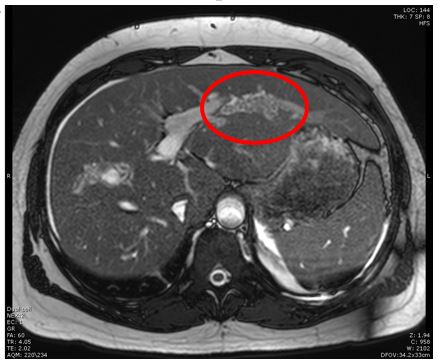