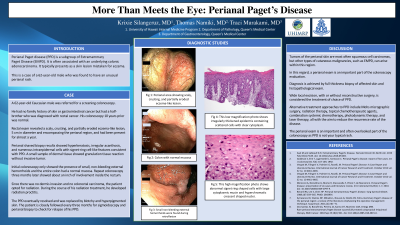 Introduction: Perianal Paget disease (PPD) is a subgroup of Extramammary Paget Disease (EMPD). It is often associated with an underlying colonic adenocarcinoma. It typically presents as a skin lesion mistaken for eczema. This is a case of a 62-year-old male who was found to have an unusual perianal rash.

Methods: A 62-year-old Caucasian male was referred for a screening colonoscopy. He had no family history of skin or gastrointestinal cancer but had a half-brother who was diagnosed with rectal cancer. His colonoscopy 10 years prior was normal. Rectal exam revealed a scaly, crusting, and partially eroded eczema-like lesion, 5 cm in diameter, and encompassing the perianal region. The rash had been present for almost a year. A perianal shaved biopsy was done by his dermatologist. Biopsy results showed hyperkeratosis, irregular acanthosis, and numerous intraepidermal cells with signet-ring cell-like features consistent with PPD. A small sample of dermal tissue showed granulation tissue reaction without invasive tumor. Initial colonoscopy only showed the presence of small, non-bleeding external hemorrhoids and the entire colon had a normal mucosa. Repeat colonoscopy three months later showed about an inch of involvement inside the rectum. Local excision is considered the first-line therapy in PPD cases. However, since there was no dermis invasion and no colorectal carcinoma, the patient opted for radiation. During the course of his radiation treatment, he developed radiation proctitis. The PPD eventually resolved and was replaced by blotchy and hyperpigmented skin. The patient is closely followed every three months for sigmoidoscopy and perianal biopsy to check for relapse of his PPD.

Discussion: Tumors of the perianal skin are most often squamous cell carcinomas, but other types of cutaneous malignancies, such as EMPD, can arise within this region. In this regard, a perianal exam is an important part of the colonoscopy evaluation. Diagnosis is achieved by full thickness biopsy of affected skin and histopathological exam. Wide local excision, with or without reconstructive surgery, is considered the treatment of choice of PPD. Alternative treatment approaches to PPD include Mohs micrographic surgery, radiation therapy, topical chemotherapeutic agents, combination systemic chemotherapy, photodynamic therapy, and laser therapy, all with the aim to reduce the recurrence rate of the disease. The perianal exam is an important and often overlooked part of the colonoscopy as PPD is not your typical rash. 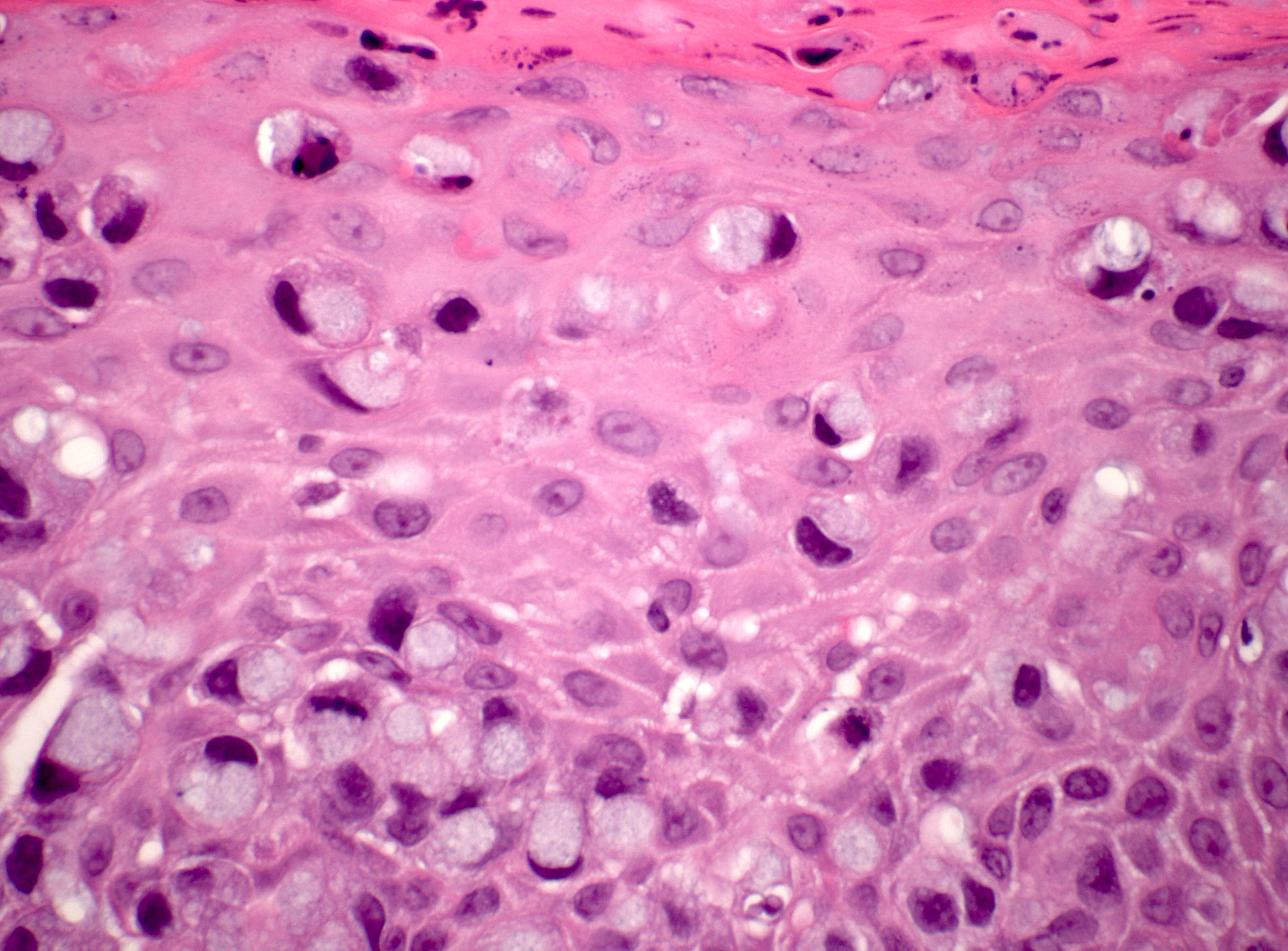 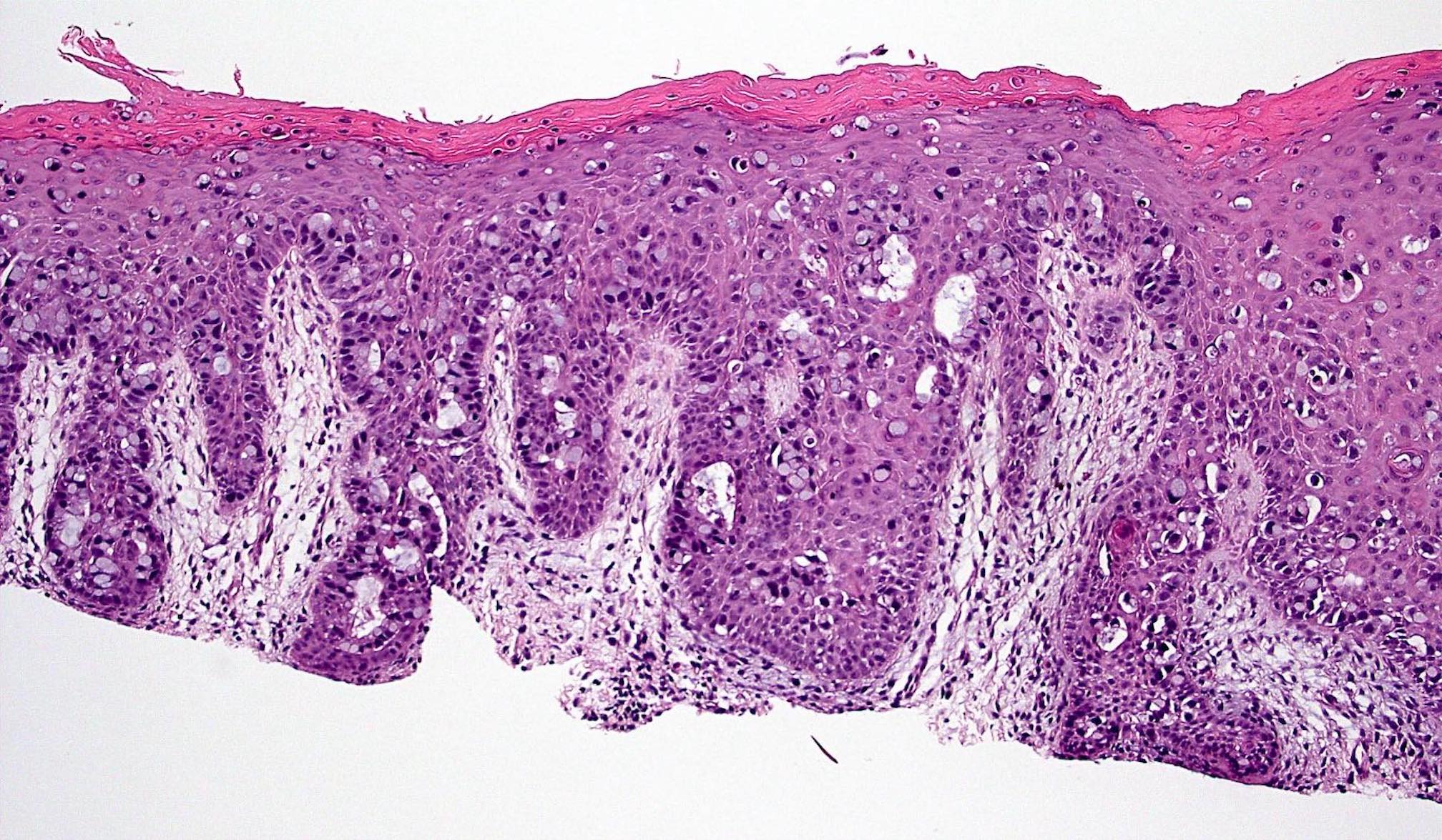