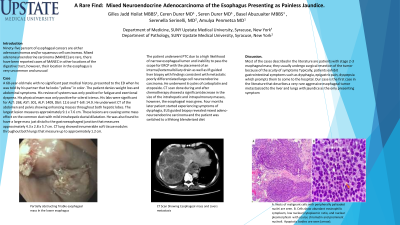 Introduction: Ninety-five percent of esophageal cancers are either adenocarcinomas and/or squamous cell carcinomas. Mixed adenoneuroendocrine carcinoma (MANEC) are rare, there have been reported cases of MANEC in other locations of the digestive tract, however, their location in the esophagus is very uncommon and unusual.

Methods: A 68-year-old male with no significant past medical history, presented to the ED when he was told by his partner that he looks “yellow” in color. The patient denies weight loss and abdominal symptoms. His review of systems was only positive for fatigue and exertional dyspnea. His physical exam was only positive for scleral icterus. His labs were significant for ALT: 268, AST: 301, ALP: 1409, Dbil: 12.6 and Tbil: 14.9. He underwent CT of the abdomen and pelvis showing enhancing masses throughout both hepatic lobes. The largest lesion measures approximately 9.1 x 7.6 cm. These lesions are causing some mass effect on the common duct with mild intrahepatic ductal dilatation. He was also found to have a large mass just distal to the gastroesophageal junction that measures approximately 4.3 x 2.8 x 5.7 cm. CT lung showed innumerable soft tissue nodules throughout both lungs that measure up to approximately 1.2 cm. The patient underwent PTC due to a high likelihood of narrow esophageal lumen and inability to pass the scope for ERCP with the placement of an internal/external biliary drain as well as IR guided liver biopsy with findings consistent with metastatic poorly differentiated large cell neuroendocrine carcinoma. He underwent 6 cycles of carboplatin and etoposide. CT scan done during and after chemotherapy showed a significant decrease in the size of the intrahepatic and intrapulmonary masses, however, the esophageal mass grew. Four months later patient started experiencing symptoms of dysphagia, EUS guided biopsy revealed mixed adeno-neuroendocrine carcinoma, and the patient was switched to a lifelong blenderized diet.

Discussion: Most of the cases described in the literature are patients with stage 2-3 esophageal mass; they usually undergo surgical resection of the tumor because of the acuity of symptoms.Typically, patients exhibit gastrointestinal symptoms such as dysphagia, epigastric pain, dyspepsia which prompts them to come to the hospital. Our case is the first case in the literature that describes a very rare aggressive esophageal tumor metastasized to the liver and lungs with jaundice as the only presenting symptom. 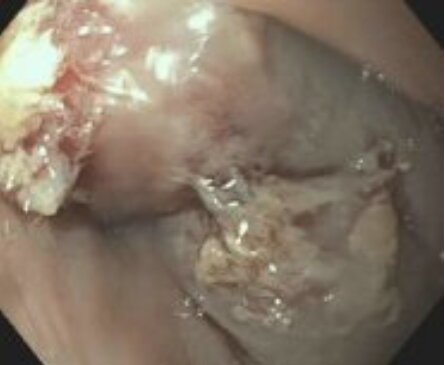 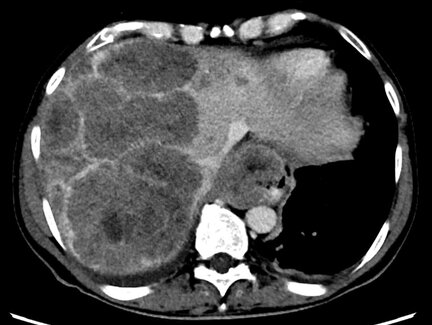