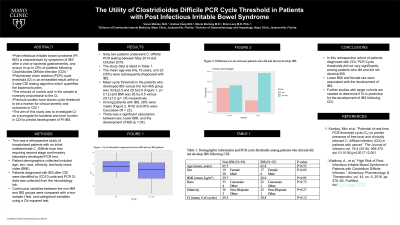 Background: Post-infection irritable bowel syndrome (PI-IBS) is characterized by symptoms of IBS after a viral, bacterial or parasitic gastroenteritis, and occurs in up to 25% of patients following Clostridioides Difficile infection (CDI). Polymerase chain reaction (PCR) cycle threshold (Ct) is an embedded result within a 2-step CDI testing algorithm which quantifies the bacterial burden. The amount of nucleic acid in the sample is inversely proportional to the Ct. Having a higher load of bacterium, the assay is positive at a lower value. Previous studies have also shown Ct to be a marker for clinical severity and outcomes in CDI. The aim of this study was to investigate Ct as a surrogate for bacterial and toxin burden in CDI to predict development of PI-IBS.

Discussion: In this retrospective cohort of patients diagnosed with CDI, PCR Cycle thresholds did not vary significantly among patients who did and did not develop IBS. Lower BMI and female sex were associated with the development of IBS. Further studies with larger cohorts are needed to determine if Ct is predictive for the development of IBS following CDI and the viability of two-step PCR testing in this scenario. Figure 2: Differences in sex between patients who did and did not develop IBS.

Table 1: Demographic information and PCR cycle thresholds among patients who did and did not develop IBS following CDI.