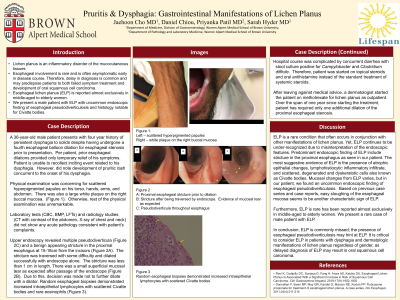 Introduction: Lichen planus is an inflammatory disorder of the mucocutaneous tissues.  Esophageal involvement is rare and is often asymptomatic early in disease course. Therefore, delay in diagnosis is common and may predispose patients to both failed symptom treatment and development of oral squamous cell carcinoma. Esophageal lichen planus (ELP) is a rare and underrecognized cause of dysphagia that has been reported almost exclusively in middle-aged to elderly women. We present a male patient with ELP and the uncommon endoscopic finding of esophageal pseudodiverticulosis and histology notable for Civatte bodies.

Methods: 36-year-old male presents with 4 years of dysphagia to solids that worsened following his fourth esophageal balloon dilatation for esophageal stenosis. He endorsed a pruritic rash on his torso, localized to his hands, arms, and abdomen (Figure A). EGD revealed multiple pseudodiverticula and a benign appearing stricture in the proximal esophagus at 15-18cm from the incisors (Figure B). Random esophageal biopsies demonstrated increased intraepithelial lymphocytes with scattered Civatte bodies and rare eosinophils (Figure C). Patient’s hospital course was complicated by concurrent diarrhea; stool culture positive for Campylobacter and Clostridium difficile.  Therefore, patient was started on topical steroids and oral antihistamine instead of the standard treatment of systemic steroids.

Discussion: ELP is a rare condition that often occurs in conjunction with other manifestations of lichen planus. Yet, ELP continues to be under-recognized due to misinterpretation of the endoscopic features. Predominant endoscopic finding of ELP include stricturing of the proximal esophagus as seen in our patient. The most suggestive evidence of ELP is the presence of atrophic epithelial changes, lymphohistiocytic inflammatory infiltrate, and scattered, degenerated and dyskeratotic cells also known as Civatte bodies. Mucosal changes from ELP varies, but in our patient, we found an uncommon endoscopic finding of esophageal pseudodiverticulosis.  Based on previous case series and case reports, easy sloughing of the esophageal mucosa seems to be another characteristic sign of ELP.  In conclusion, ELP is a rare condition that is commonly missed; the presence of esophageal pseudodiverticulosis may hint at ELP. It is critical to consider ELP in patients with dysphagia and dermatologic manifestations of lichen planus, as delayed diagnosis of ELP may result in oral squamous cell carcinoma.

Figure A: Pruritic rash on torso, hands, arms, and abdomen with oral lesion on physical examination.

Figure B:
Image 1 & 2: EGD revealed multiple pseudodiverticula in the esophagus marked by arrows
Image 3:Benign appearing stricture in the proximal esophagus at 15-18cm from the incisors 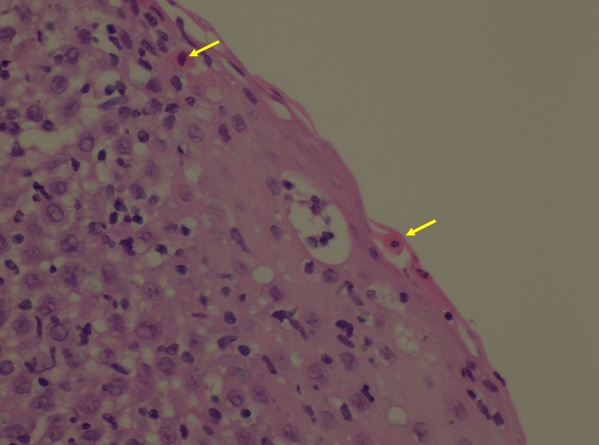