P1059 (S2008). - A Case of Esophageal Adenocarcinoma in a Young Male With Longstanding Untreated Eosinophilic Esophagitis 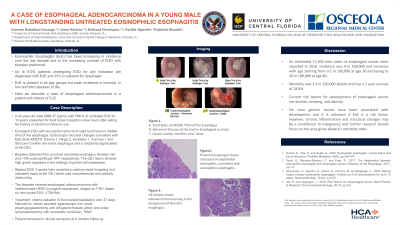 Introduction: Eosinophilic Esophagitis (EoE) has been increasing in incidence over the last decade due to the increasing number of EGD with biopsies preformed. Up to 6.5% patients undergoing EGD for any indication are diagnosed with EoE and 22% in patients for dysphagia. EoE is present in all age groups but peak incidence is bimodal, in first and third decades of life. Here we describe a case of esophageal adenocarcinoma in a patient with history of EoE.

Methods: A 42 year-old male (BMI 27 kg/m2) with PMHx of untreated EoE for 10 years presented to the ED for food bolus impaction a few hours after eating pork. No history of alcohol or tobacco use. Emergent EGD was performed with successful removal of solid food bolus in middle third of the esophagus. There were endoscopic mucosal changes consistent with EoE (EoE-EREFS: Edema 1, Rings 2, Exudates 1, Furrows 1 and Stricture 0) within the entire esophagus and a nodularity appreciated at the GEJ. Biopsies obtained from proximal and distal esophagus showed more than 50 and 100 eosinophils/per HPF respectively. The GEJ lesion showed high grade dysplasia in the settings of goblet cell metaplasia. Repeat EGD 3 weeks later revealed a medium sized fungating and ulcerated mass at the GEJ which was circumferential and partially obstructing. The biopsies showed esophageal adenocarcinoma with indeterminate HER2 oncogene expression, staged as T3N1 based on mini-probe EUS.  Oncology classified the patient as cT3N1Mx. The patient received chemo-radiation (5-fluorouracil/oxaliplatin) over 37 days followed by robotic assisted laparoscopic Ivor Lewis esophagogastrectomy with left gastric hepatic artery and celiac lymphadenectomy with successful remission, T0N0. Patient remained in clinical remission at 6 months follow up.

Discussion: An estimated 17,500 new cases of esophageal cancer were reported in 2016. Incidence was 4 in 100,000 and increases with age starting from 0.2 in 100,000 at age 30 increasing to 26 in 100,000 at age 80. Mortality was 3.9 in 100,000 deaths and has a 5 year survival of 18.9%. Current risk factors for development of esophageal cancer are alcohol, smoking, and obesity. No clear genetic factors have been associated with development and it is unknown if EoE is a risk factor. However, chronic inflammation and structural changes may be a contributor to malignancy and further research should focus on this area given diseases mortality rates.

A. Food Bolus at Middle Third of the Esophagus
B. Abnormal Mucosa at the Gastro-Esophageal Junction
C. Gastric Cardia, retroflex view: Mass 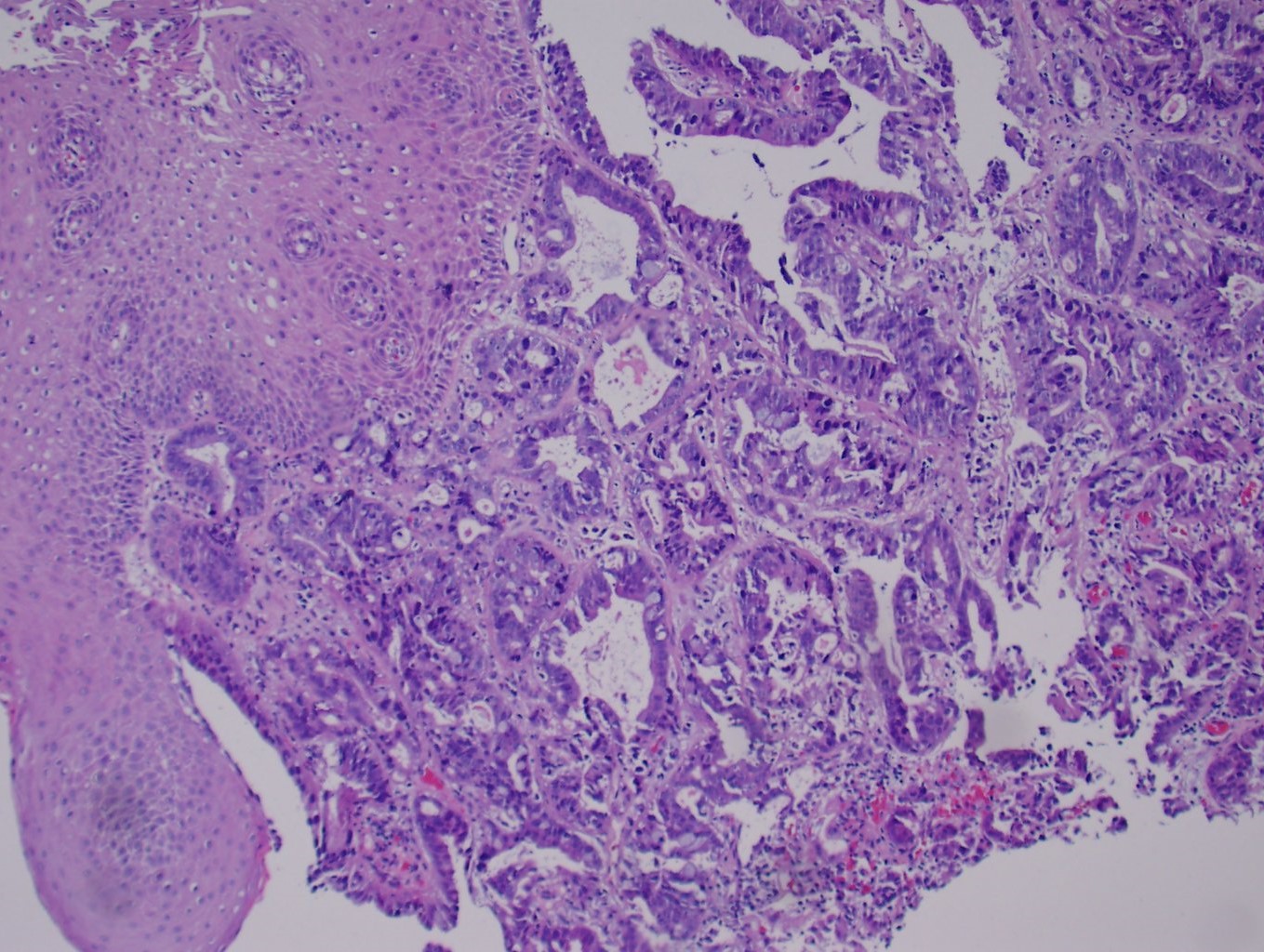