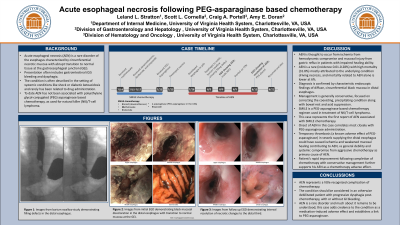 Introduction: Acute esophageal necrosis (AEN) is a rare disorder of the esophagus characterized by circumferential necrotic mucosa accentuated in the distal esophagus with abrupt transition to normal tissue at the gastroesophageal junction (GEJ). It is thought to arise from ischemia related to hemodynamic compromise and mucosal injury from gastric reflux in a patient with impaired healing ability. AEN is often described in the setting of systemic conditions like shock or diabetic ketoacidosis. Typically, it presents with upper gastrointestinal bleed (UGB) and dysphagia. Mortality rate is high though mostly related to the underlying systemic illness and reduces to 6% specific to AEN. The condition has been related to drugs including antipsychotics, anti-hypertensives, and the tyrosine kinase inhibitor afatinib.

Methods: A 68-year-old man with a natural killer/T-cell lymphoma of nasal type received a chemotherapy regimen called SMILE (dexamethasone, high dose methotrexate, isofosfamide, polyethylene glycol-conjugated (PEG) asparaginase, and etoposide). On day 6 of the first cycle he presented with weakness, nausea, and dysphagia to oral medication then to solid food. Notably he did not have UGB. Barium swallow showed defects in the distal esophagus and imaging identified ill-defined hypoattenuating lesions in the same area. Esophagogastroduodenoscopy (EGD) found diffuse mucosal irregularity with circumferential black mucosa in the lower-middle and distal thirds concerning for necrosis that stopped at the GEJ. Biopsies from the necrotic edge showed acute inflammation and active ulceration. He was started on intravenous proton pump inhibitor and oral sucralfate and received nutrition parenterally with restricted oral intake. Repeat EGD one week later showed resolution of necrosis. A gastrostomy tube was placed for enteral nutrition. Three weeks after initial EGD his diet was advanced, and he has since been able to continue with planned radiation therapy.

Discussion: Esophageal necrosis is a little recognized complication of chemotherapy and should be considered in an otherwise debilitated patient with progressive dysphagia post-chemotherapy, with or without UGB. This case adds credence to AEN as a medication-induced adverse effect and establishes a link to PEG-asparaginase. Further understanding of AEN pathogenesis, and awareness of its relation to PEG-asparaginase could reduce its complications and improve the safety and efficacy of treatment with this agent.