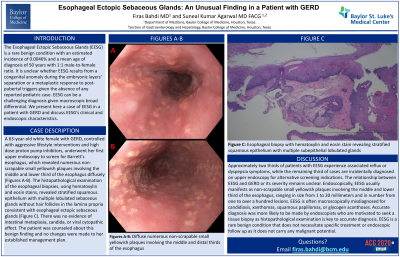 Introduction: The Esophageal Ectopic Sebaceous Glands (EESG) are a rare benign condition with an estimated incidence of 0.0046% and a mean age of diagnosis of 50 years with 1:1 male-to-female ratio. It is unclear whether EESG result from a congenital anomaly during the embryonic layers’ separation or a metaplastic response to post-pubertal triggers given absence of any reported pediatric case. EESG can be a challenging diagnosis given macroscopic broad differential. We here present a case of EESG in a patient with GERD and discuss EESG’s clinical and endoscopic characteristics.

Methods: A 63 year old white female with GERD, controlled with aggressive lifestyle interventions and high dose proton pump inhibitors, underwent her first upper endoscopy to screen for Barrett's esophagus, which revealed numerous non-scrapable small yellowish plaques involving the middle and lower third of the esophagus diffusely (Figures A-B). The histopathological examination of the esophageal biopsies using hematoxylin and eosin stains revealed stratified squamous epithelium with multiple lobulated sebaceous glands without hair follicles in the lamina propria consistent with esophageal ectopic sebaceous glands (Figure C). There was no evidence of intestinal metaplasia, candida, or viral cytopathic effect. The patient was counseled about this benign finding and no changes were made to her established management plan.

Discussion: Approximately two thirds of patients with EESG experience associated reflux or dyspepsia symptoms, while the remaining third of cases are incidentally diagnosed on upper endoscopy for alternative screening indications. The relationship between the EESG and GERD or its severity remains unclear. Endoscopically, EESG usually manifest as non-scrapable small yellowish plaques involving the middle and lower third of the esophagus, ranging in size from 1 to 20 millimeters and in number from one to over a hundred lesions. EESG are often macroscopically misdiagnosed for candidiasis, xanthomas, squamous papillomas, or glycogen acanthoses. Accurate diagnosis was more likely to be made by endoscopists who are motivated to seek a tissue biopsy as histopathological examination is key to accurate diagnosis. EESG are a rare benign condition that does not necessitate specific treatment or endoscopic follow up as it does not carry any malignant potential. 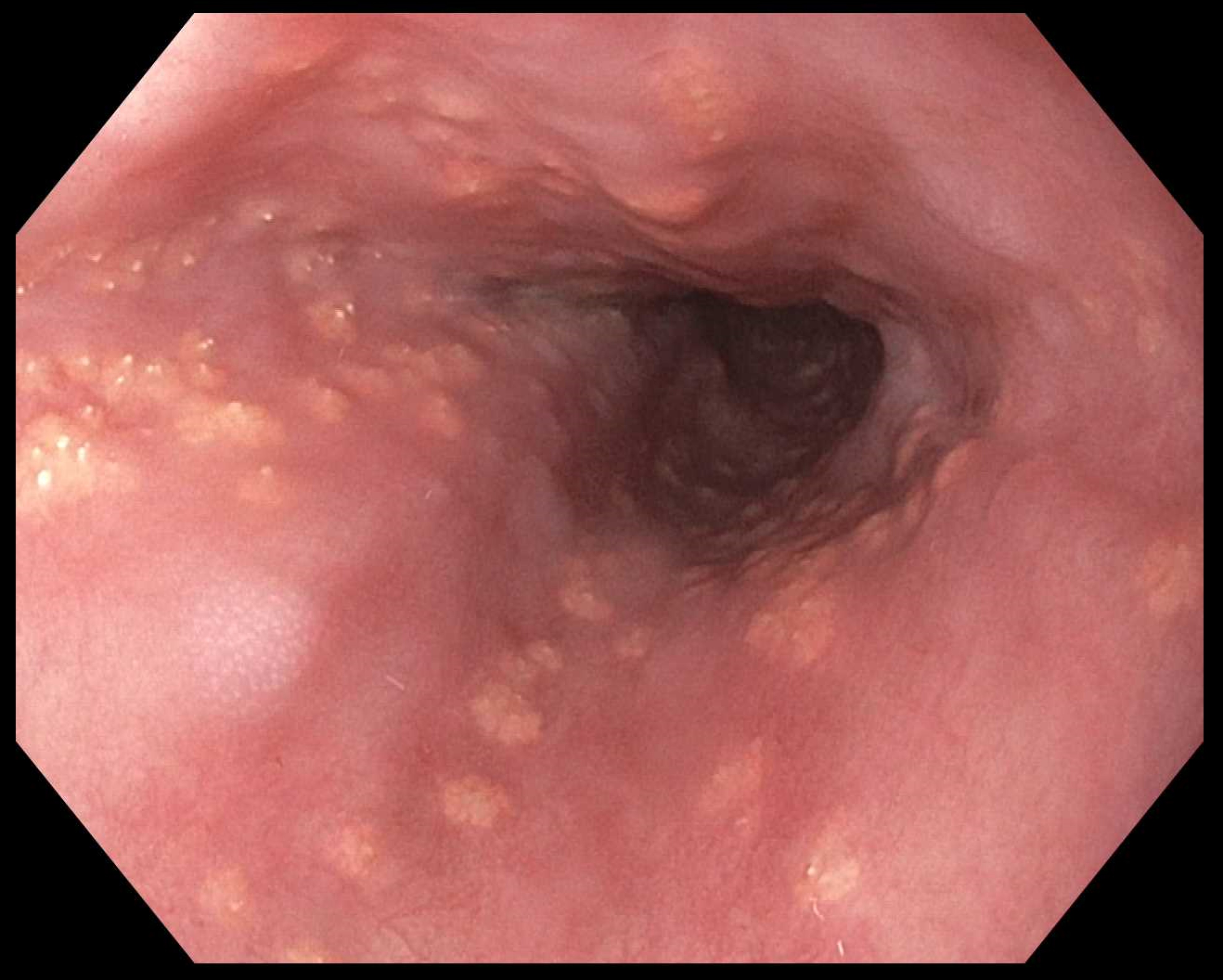 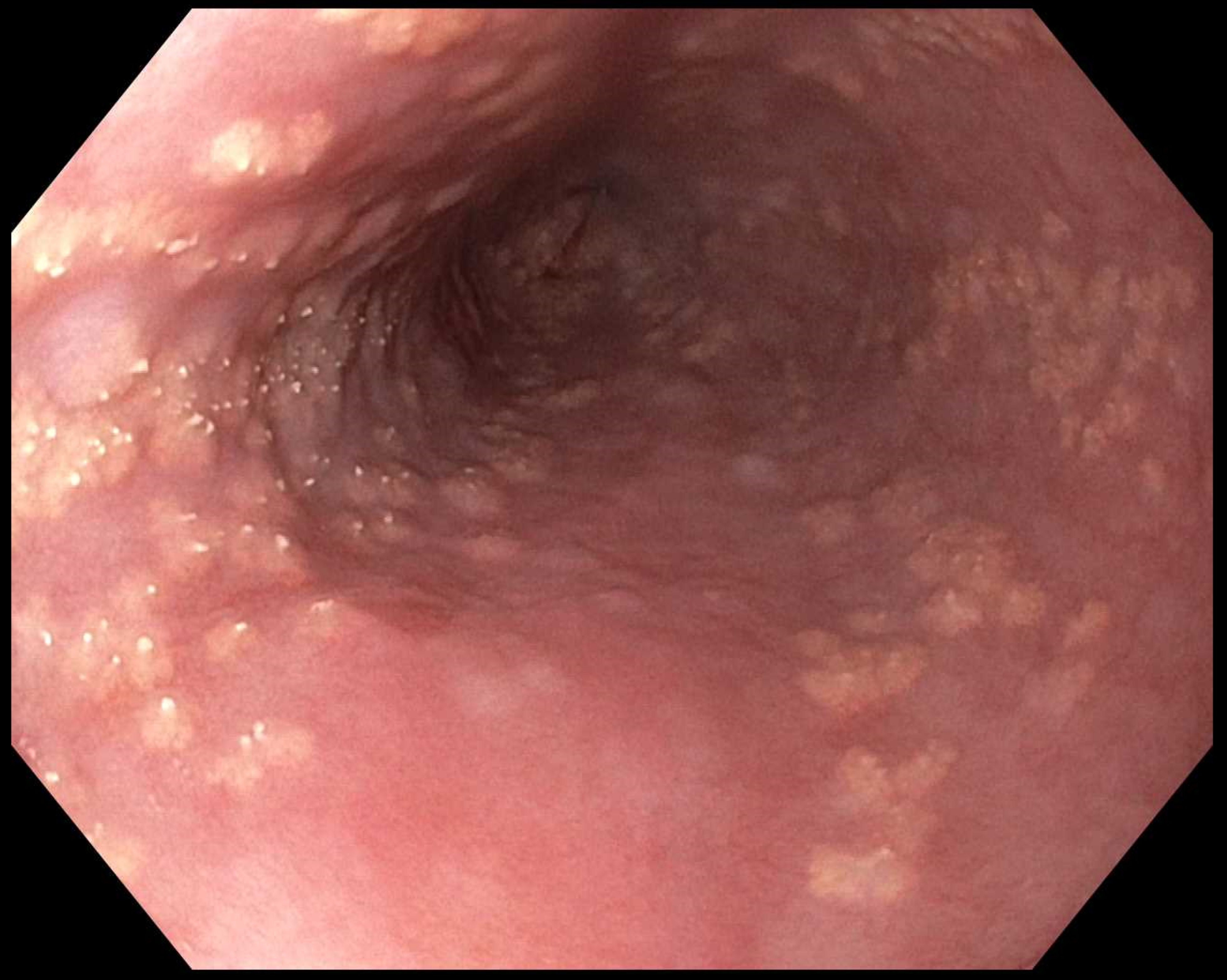 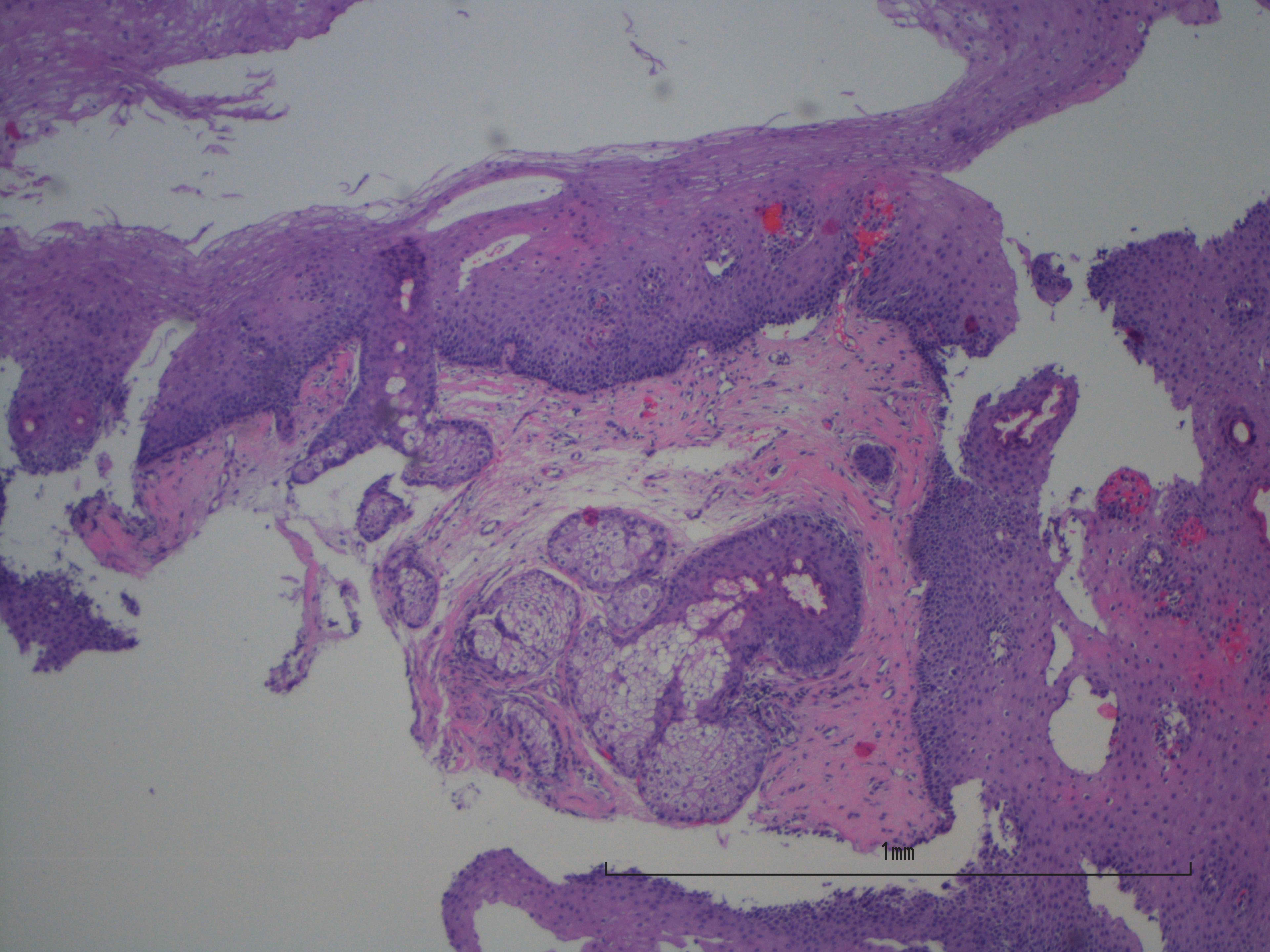