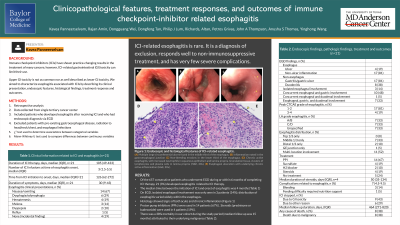 Introduction: Immune checkpoint inhibitors (ICIs) have shown practice-changing results in the treatment of many cancers, however, ICI-related gastrointestinal (GI) toxicity can limit their use. Upper GI toxicity is not as common nor as well described as lower GI toxicity. We aim to characterize esophagitis associated with ICIs by describing its clinical presentation, endoscopic features, histological findings, treatment response and outcomes.

Methods: This is a retrospective study of patients at a tertiary cancer center who developed esophagitis after receiving ICI between June 2011 and January 2020. The diagnosis of esophagitis was made based on esophagogastroduodenoscopy (EGD) findings. Patients with pre-existing gastro-esophageal disease, and recent head/neck/chest radiation were excluded. A χ2 test was used to determine associations between categorical variables. A Mann-Whitney U test was used to compare differences between continuous variables.

Results: Of the 657 consecutive patients who underwent EGD during or within 6 months of completing ICI therapy, 21 (3%) developed esophagitis of unclear etiology, which was deemed to be related to ICI. Of these patients, one (5%) received an inhibitor of cytotoxic T-lymphocyte associated antigen 4 alone, 15 (71%) received an inhibitor of programmed cell death protein 1 or its ligand alone, and 5 (24%) received a combination of the two classes (Table 1). The median time between the initiation of ICI and onset of esophagitis was 4 months. On EGD, isolated esophageal involvement was only seen in 3 patients (24%); distribution of esophagitis varied widely within the esophagus. Eighteen patients (86%) had concurrent involvement of the stomach, duodenum, or both. Histology showed signs of both acute and chronic inflammation (Figure 1). Proton pump inhibitors (PPIs) were used in 14 patients (67%).  Steroids (prednisone or budesonide) were used in 4 patients (19%). Repeat endoscopy was only performed in 5 patients, 4 (75%) of which had complete resolution. There was a 38% mortality in our cohort during the study period (median follow up was 15 months) attributed to their underlying malignancy (Table 2).

Discussion: Esophagitis associated with ICI is rare. The diagnosis is one of exclusion since its clinical presentation appears similar to inflammation due to other causes. Symptoms are mild and respond well to non-immunosuppressive treatment with very few severe complications. 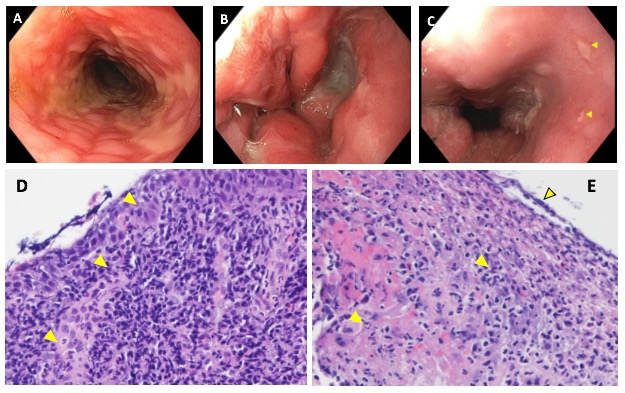 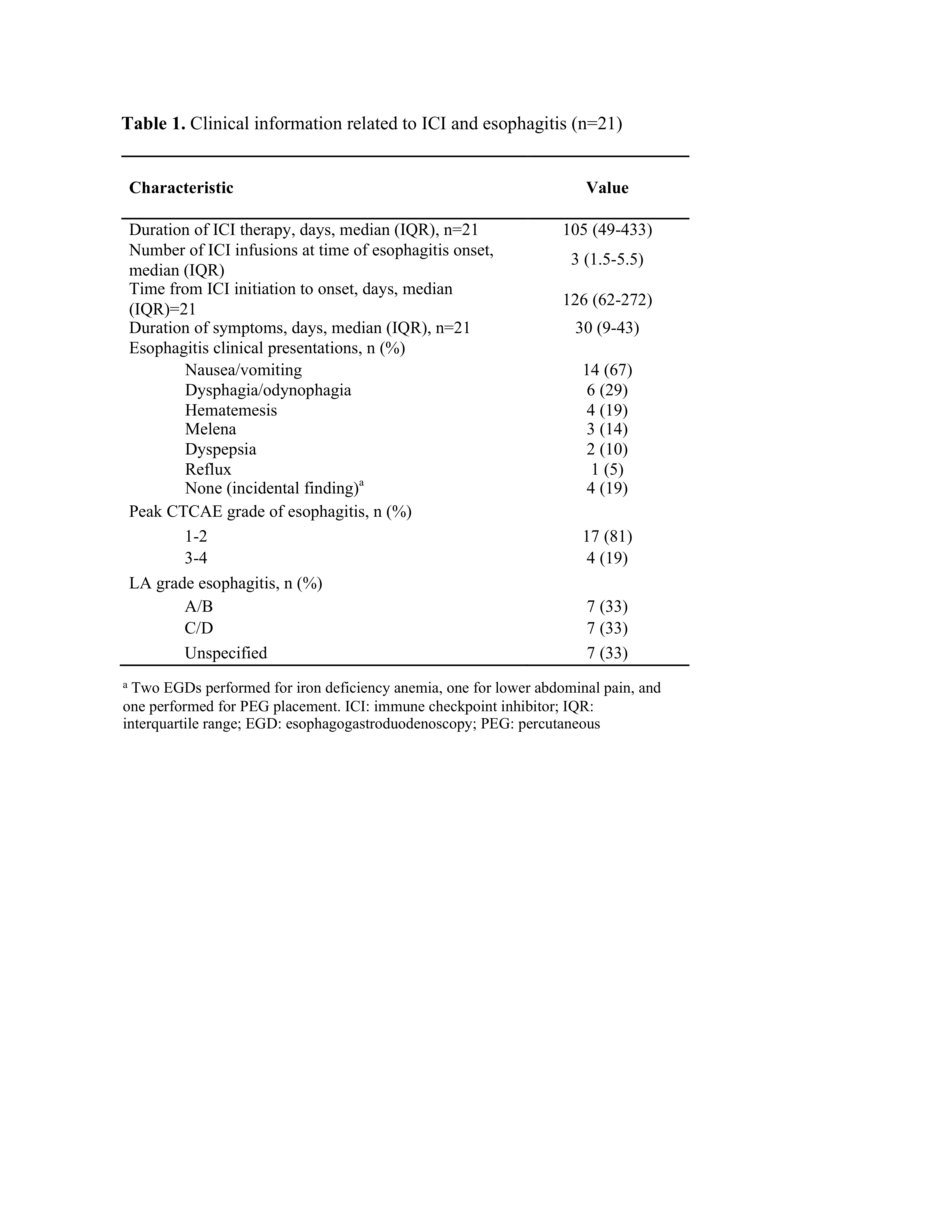 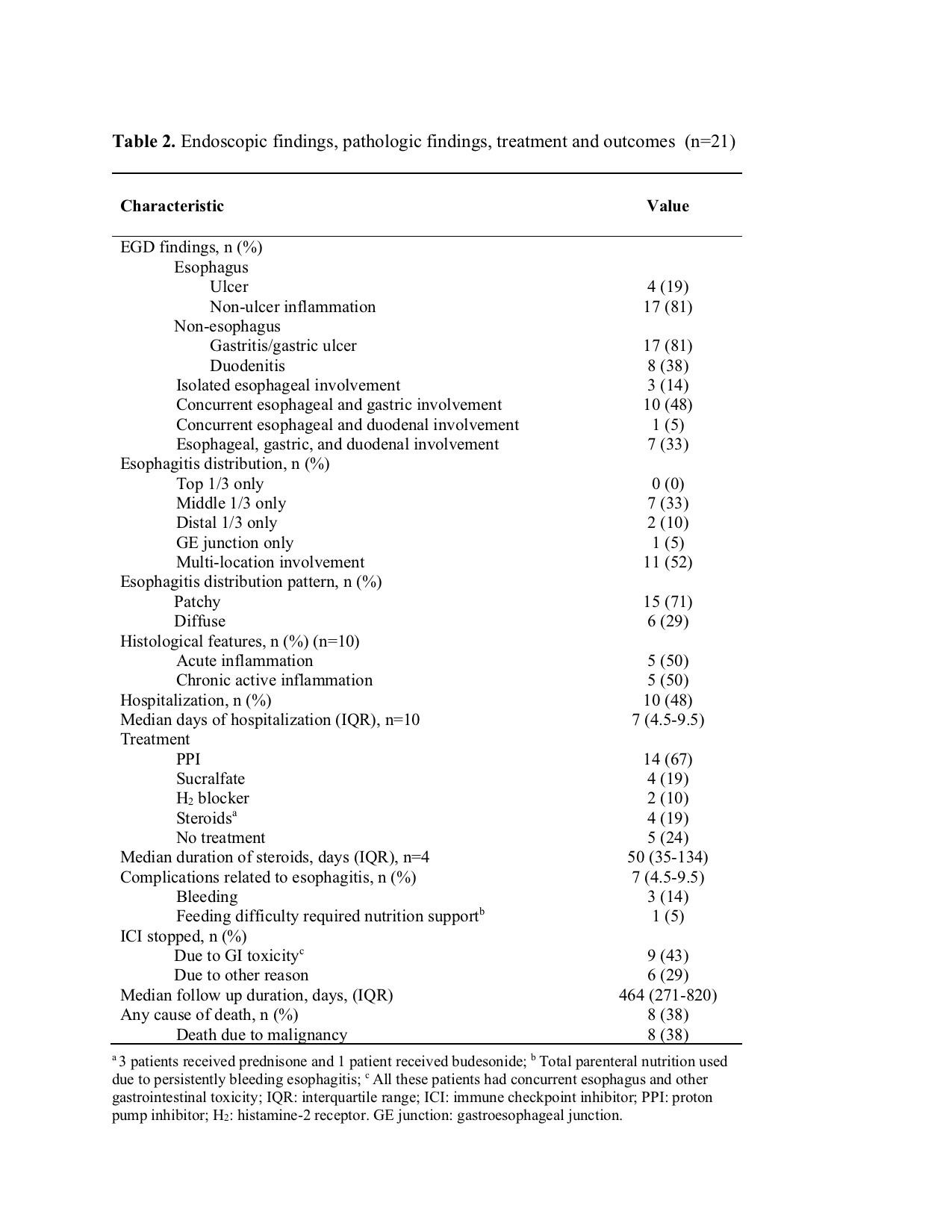