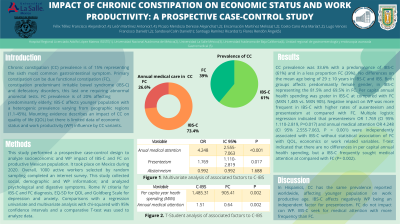 Methods: This study performed a prospective case-control design to analyze socioeconomic and WP impact of SII-C and FC on productive Mexican population. It took place on Mexico during 2020. Overall, 1000 active workers selected by random sampling completed an internet survey. This study collected social, demographic and WP information; and analyzed psychological and digestive symptoms. Rome IV criteria for SII-C and FC diagnosis, EQ-5D for QOL and Goldberg Scale for depression and anxiety. Comparisons with a regression univariate and multivariate analysis with chi-squared with 95% confidence intervals and a comparative T-test was used to analyze data.

Results: CC prevalence was 33.6% with a predominance of SII-C (61%) and in a less proportion FC (39%). No differences on the mean age being of 29 ± 10 years in SII-C and SII. Both groups affects predominantly female gender, in SII-C representing the 81.5% and 69.5% in FC. Per capita annual health spending was grater in SII-C at compared with FC (MXN 1,485 vs. MXN 905). Negative impact on WP was more frequent in SII-C with higher rates of ausenteeism and presenteeism at compared with FC. Multiple logistic regression indicated that presenteeism OR 1.769 (CI 95% 1.110-2.819, P=0.017) and annual medical attention OR 4.248 (CI 95% 2.555-7.063, P < 0.001) were independently associated with SII-C without statistical association of FC with QOL, economics or work related variables. T-test indicated that there are no differences in per capital annual health spending, but a SII-C frequently sought medical attention at compared with FC (P= 0.002).