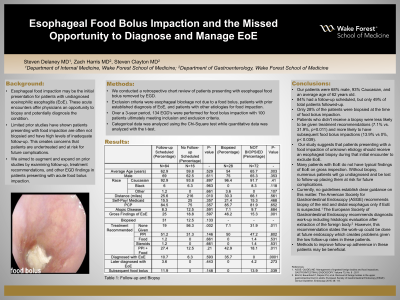 Introduction: Esophageal food impaction may be the initial presentation for patients with undiagnosed eosinophilic esophagitis (EoE). These acute encounters offer physicians an opportunity to biopsy and potentially diagnosis the condition. Though prior studies are limited, they have shown patients presenting with food impaction are often not biopsied and have high inadequate follow-up. This creates concerns that patients are undertreated and at risk for future complications. We aim to augment and expand on prior studies by examining follow-up, treatment recommendations, and other EGD findings in patients presenting with acute food bolus impaction.

Methods: We conducted an IRB approved retrospective chart review at a tertiary medical center of patients presenting with esophageal food bolus removed by EGD. Exclusion criteria were esophageal blockage not due to a food bolus, patients with prior established diagnosis of EoE, and patients with other etiologies for food impaction including: esophageal cancer, external compression of the esophagus, or underlying esophageal dysmotility. Over a 3-year period, 134 EGD’s were performed for food bolus impaction with 100 patients ultimately meeting inclusion and exclusion criteria.  Categorical data was analyzed using the Chi-Square test while quantitative data was analyzed with the t-test.

Discussion: Our study suggests that patients presenting with a food impaction of unknown etiology should receive an esophageal biopsy during that initial encounter to exclude EoE. Many patients with EoE do not have typical findings of EoE on gross inspection. Without biopsy, numerous patients will go undiagnosed and be lost to follow-up placing them at risk for future complications. Currently, no guidelines establish clear guidance on this matter. In addition, methods to improve follow-up adherence in these patients may be beneficial. 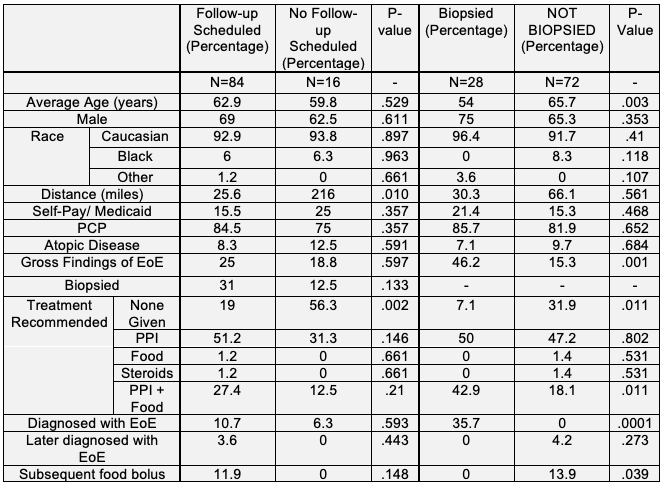