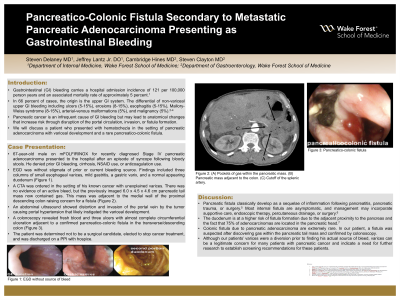 Introduction: Malignancy is an infrequent cause of upper gastrointestinal bleeding. Pancreatic adenocarcinoma, given the insidious development, is apt to foster complications by the time of presentation. We will discuss a patient who presented with hematochezia in the setting of pancreatic adenocarcinoma with variceal development and a rare pancreatico-colonic fistula.

Methods:
A 67-year-old male on mFOLFIRINOX for recently diagnosed Stage IV pancreatic adenocarcinoma presented to the hospital after an episode of syncope following bloody stools. He denied any prior episodes of GI bleeding, cirrhosis, NSAID use, or anticoagulation use. EGD was without stigmata of prior or current bleeding source. Findings included three columns of small esophageal varices, mild gastritis, a gastric varix, and a normal appearing duodenum (Figure 1). A CTA was ordered in the setting of his known cancer with unexplained varices. There was no evidence of an active bleed, but the previously imaged 6.0 x 4.5 x 4.6 cm pancreatic tail mass now contained gas. This mass was adjacent to the medial wall of the proximal descending colon raising concern for a fistula (Figure 2). In addition to these findings, there was pancolonic wall thickening, cutoff of the splenic artery as it encountered the pancreatic mass, and hypodensities of the spleen. An abdominal ultrasound showed distortion and invasion of the portal vein by the tumor causing portal hypertension that likely instigated the variceal development. Further work-up included a colonoscopy that revealed fresh blood and three ulcers with almost complete circumferential ulceration adjacent to a confirmed pancreatico-colonic fistula in the transverse/descending colon (Figure 3). The patient was determined not to be a surgical candidate, elected to stop cancer treatment, and was discharged on a PPI with hospice.


Discussion: Pancreatic fistula classically develop as a sequela of inflammation following pancreatitis, pancreatic trauma, or surgery. Colonic fistula due to pancreatic adenocarcinoma are extremely rare with only one prior known case. In our patient, a fistula was suspected after discovering gas within the pancreatic tail mass and confirmed by colonoscopy. Although our patients’ varices were a diversion prior to finding his actual source of bleed, varices can be a legitimate concern for many patients with pancreatic cancer and indicate a need for further research to establish screening recommendations.

Figure 1: EGD findings of small esophageal varices, mild gastritis at the fundus, a gastric varix, and a normal appearing duodenum.

Figure 2: Gas in pancreatic mass (A), mass abutting the colon (B), and cutoff of splenic artery (C).