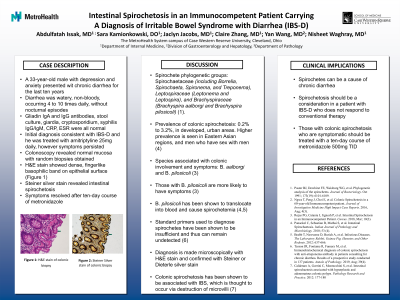 Introduction: Intestinal spirochetosis (IS) has been reported as a rare cause of diarrhea and abdominal pain with the prevalence of IS varying worldwide. We report a case of a patient with previously known IBS-D diagnosed with IS on colonic biopsies.

Discussion: Colonic spirochetes have a lower prevalence of 0.2% to 3.2% in developed countries, but a higher prevalence has been seen in Eastern Asian regions. Prevalence is higher among those with gastrointestinal complaints and among men who have sex with men (28% to 62.5%). Certain species of spirochetes have been found to be associated with symptomatic disease. Those with Brachyspira pilosicoli are more likely to have gastrointestinal symptoms whereas those colonized with B. aalborgi may be asymptomatic. Intestinal spirochetes are diagnosed on histopathology with H&E stain and confirmed with immunohistochemistry using Steiner or Dieterle silver stain. Mucosal findings on colonoscopy are non-specific or normal. IS is also reported to be associated with irritable bowel syndrome (IBS) and hyperplastic/adenomatous polyps. It is thought that spirochete colonization can lead to destruction of the microvilli, which is speculated to lead to symptomatic IS; however, the pathophysiology for symptomatic colonic disease is unknown. It is important to consider spirochetes as a cause of diarrhea in those who carry concurrent diagnosis of unrevealing chronic diarrhea and IBS-D. Treatment with metronidazole should be considered in symptomatic patients. 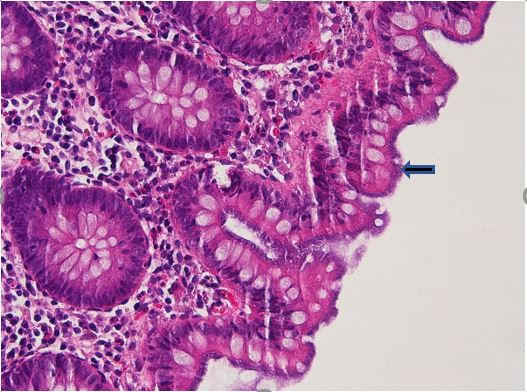 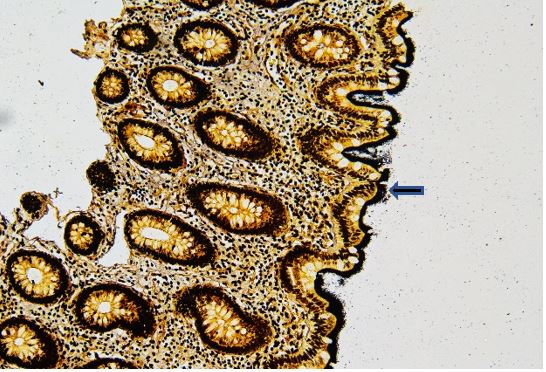