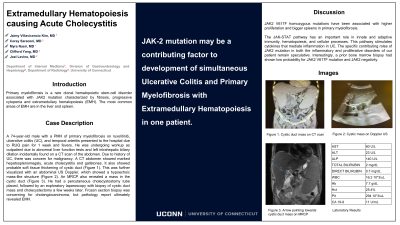 Introduction: Myelofibrosis is a rare clonal hematopoietic stem-cell disorder associated with JAK2 mutation characterized by fibrosis, progressive cytopenia and extramedullary hematopoiesis (EMH). The most common areas of EMH are in the liver and spleen but can occur in other organs. We present a case of a patient with ulcerative colitis (UC) and a mass in the cystic duct that was later revealed to be EMH.

Methods: A 74-year-old male with a past medical history of primary myelofibrosis on ruxolitinib, UC, temporal arteritis, and melanoma presented to the hospital due to abdominal pain for 1 week. He was undergoing workup as outpatient due to abnormal liver function tests and left intrahepatic biliary dilation incidentally found on a CT scan of the abdomen. Due to history of UC, there was concern for malignancy. He had right-sided abdominal pain and fevers on presentation. A CT abdomen showed marked hepatosplenomegaly, acute cholecystitis and gallstones. It also showed probable soft tissue thickening of cystic duct (Figure 1). This was further visualized with an abdominal US Doppler, which showed a hypoechoic mass-like structure (Figure 2). An MRCP also revealed a mass in the cystic duct (Figure 3). He had a percutaneous cholecystostomy tube placed, followed by an exploratory laparoscopy with biopsy of cystic duct mass and cholecystectomy a few weeks later. Frozen section biopsy was concerning for cholangiocarcinoma, but pathology report ultimately revealed EMH.

Discussion: Studies have shown that splenomegaly in myelofibrosis occurs due to EMH associated with abnormal trafficking patterns of clonal hematopoietic progenitor cells and pluripotent hematopoietic stem cells with migration to the spleen. Specifically, JAK2 V617F homozygous mutations have been associated with higher proliferattion and bigger spleens. The JAK-STAT pathway has an important role in innate and adaptive immunity, hematopoiesis, and cellular processes. This pathway stimulates cytokines that mediate inflammation in UC. The specific contributing roles of JAK2 mutation in both the inflammatory and proliferative disorders of our patient are interesting, but speculative.  A prior bone marrow biopsy had shown low probability for JAK2 V617F mutation and JAK2 negativity. JAK2 inhibitors are used for treatment of primary myelofibrosis, and recently tofacitinib was approved for UC. However, existence of other genetic mutations that also participate in clonal expansion is possible, and these drugs might not always be effective. 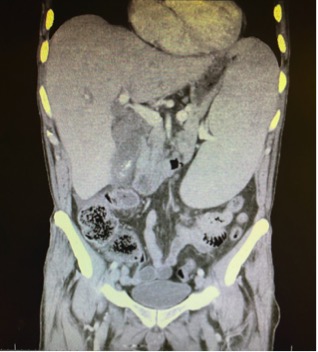 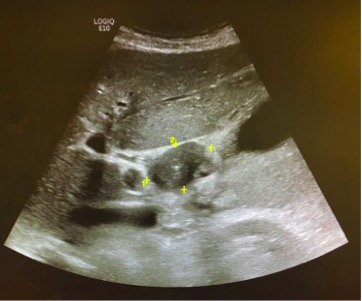 Cystic mass on Doppler US 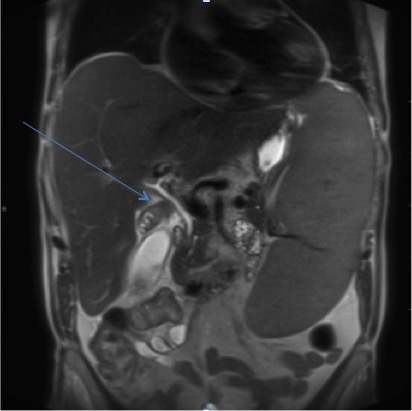