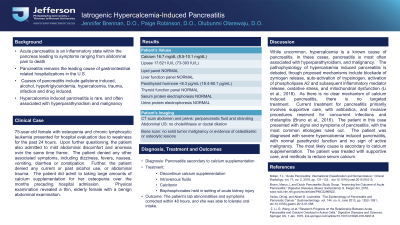 Introduction: Acute pancreatitis is an inflammatory state within the pancreas causing abdominal pain in its most minor form, and end organ dysfunction or death in its most severe form. Pancreatitis remains the leading cause of gastrointestinal-related hospitalizations in the USA. The most common etiology is gallstone induced, though other causes include alcohol, hypertriglyceridemia, hypercalcemia, trauma and infection. Hypercalcemia-induced pancreatitis is rare, and often associated with hyperparathyroidism and malignancy.

Methods: A 75-year-old female with a history of osteopenia presented to the hospital for one day of weakness. She also reported mild abdominal discomfort and anorexia, though denied other associated symptoms. She denied any current or past alcohol use, or abdominal trauma. On physical examination, the patient was noted to be a thin, elderly female with a benign abdominal examination.

Laboratory values were significant for elevated lipase, normal liver function panel, and severely elevated calcium level. The patient underwent a CT scan of her abdomen that revealed signs of pancreatitis, with peripancreatic fluid and stranding. She underwent evaluation for common causes of pancreatitis, including abdominal ultrasound and lipid panel, that ruled out cholelithiasis and hypertriglyceridemia, respectively. Workup of her hypercalcemia showed normal levels of parathyroid and thyroid hormones, SPEP and UPEP ruled out multiple myeloma, and full body CT and bone scans ruled out solid tumor malignancy.