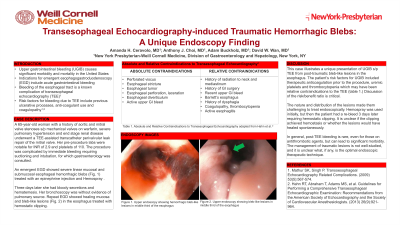 Introduction: Upper gastrointestinal bleeding (UGIB) causes significant morbidity and mortality in the United States. Indications for emergent EGD include acute gastrointestinal bleeding. Bleeding of the esophageal tract is a known complication of transesophageal echocardiography (TEE.)1 Risk factors for bleeding due to TEE include previous ulcerative processes, anti-coagulant use and coagulopathy.1,2

Methods: A 65-year-old woman with a history of aortic and mitral valve stenoses s/p mechanical valves on warfarin, severe pHTN and ESRD underwent a TEE-assisted transcatheter perivalvular leak repair of the mitral valve. Her pre-procedure labs were notable for INR of 2.9 and platelets of 110. The elective procedure was complicated by immediate bleeding requiring suctioning and intubation, for which GI was consulted. An emergent EGD showed scattered, extensive esophageal linear severe mucosal and submucosal hemorrhagic blebs (Fig. 1) treated with an epinephrine injection and Hemospray. Three days later she had bloody secretions and hematemesis. Her bronchoscopy was without evidence of pulmonary source. Repeat EGD showed healing mucosa and bleb-like lesions (Fig. 2) in the esophagus treated with hemostatic clipping. Five days later the patient coughed up dime sized clots which quickly resolved and the patient was discharged.

Discussion: This case illustrates a unique presentation of UGIB s/p TEE from post-traumatic bleb-like lesions in the esophagus. The patient’s risk factors for UGIB include warfarin with an INR 2.9 prior to the procedure, uremic platelets and thrombocytopenia. The nature and distribution of the lesions made them challenging to treat endoscopically. Hemospray was first attempted, but then the patient continued to bleed, requiring hemostatic clipping. It is unclear if the clipping achieved hemostasis or whether the lesions would have healed spontaneously. In general, post-TEE bleeding is rare, even for those on antithrombotic agents, but can lead to significant morbidity. The management of traumatic lesions is not well-studied, and it is unclear what, if any, is the optimal endoscopic therapeutic technique. 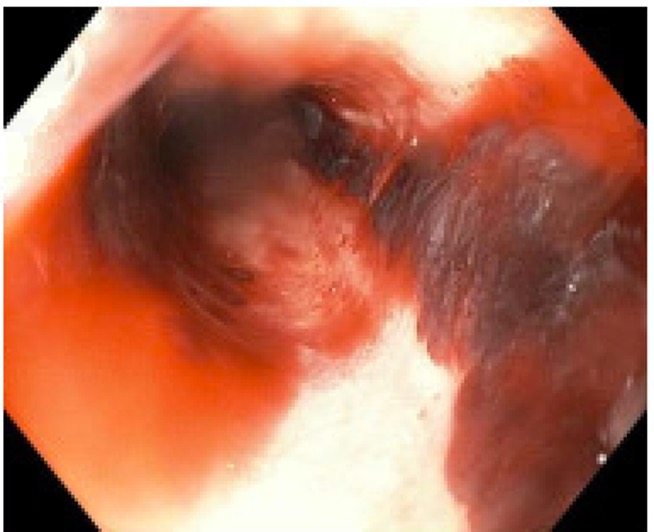 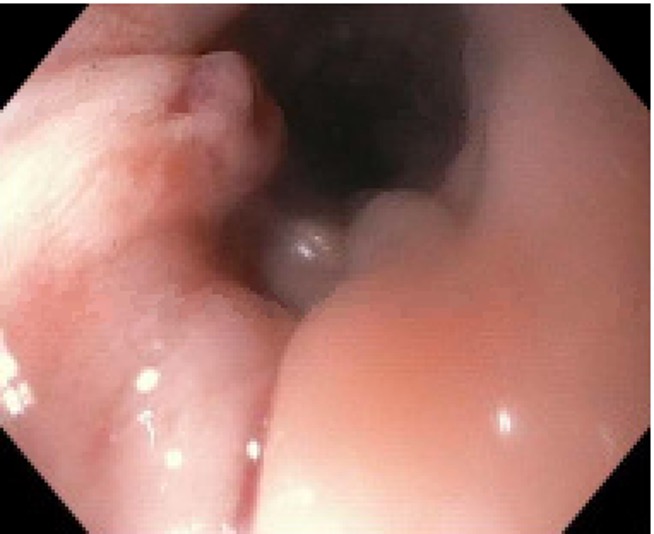