P0851 (S0377). - Is It Possible to Ablate Cough? Characteristics of Patients With Esophageal Inlet Patch and Concomitant Pulmonary Disease 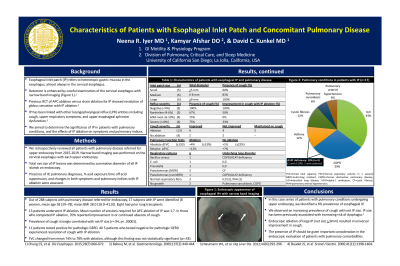 Introduction: Esophageal inlet patch (IP) is heterotopic gastric mucosa in the esophagus, often the cervical esophagus. While the significance of IP among patients with pharyngoesophageal symptoms continues to evolve – IP is now mentioned in the Rome IV evaluation of globus sensation – clinical characteristics of patients with IP and underlying pulmonary disease are less clear. Recognizing the increased prevalence of dysmotility including of the upper esophageal sphincter within this population, we aimed to characterize the clinical features of IP among patients with pulmonary disease and the effects of IP ablation on both symptoms and objective pulmonary indices.

Methods: We conducted a retrospective review of all patients with pulmonary disease referred for upper endoscopy and pH-metry to a GI motility program over approximately four years. Demographics, pulmonary diagnoses, and symptoms including cough severity were recorded. The percent acid exposure time off acid suppression was captured. Total size of IP lesions was determined by summative diameter of all IP islands identified on endoscopy. Pulmonary function indices before and after ablation (if performed) were assessed.

Results: Seventeen subjects (8 female, mean age 58 years [29–78], mean BMI 28.0 [18.9–41.0]) were identified. Underlying pulmonary diagnoses are shown in Figure 1, including 3 subjects with alpha-1 antitrypsin deficiency. Eight of 17 patients had received either single or double lung transplant. Six patients had positive respiratory cultures, with enteric organisms detected in 4 patients. Prevalence of cough increased incrementally with total IP size. All patients who were ruled out for pathologic reflux experienced improvement in cough after IP ablation. Changes in pulmonary function before and after IP ablation are summarized in Table 1.

Discussion: In this small observational study, no single pattern of lung injury was identified among patients with IP and pulmonary disease, although 3 cases of alpha-1 antitrypsin deficiency were observed. Total IP size did correlate with cough, a key symptom for this patient population. While most patients tested positive for pathologic GERD, it was notable that cough improved universally among the patients who were ruled out for excess reflux and underwent IP ablation. This finding warrants further exploration in a larger, prospective manner. Presence of IP should be given careful consideration in the evaluation of patients with pulmonary disease. 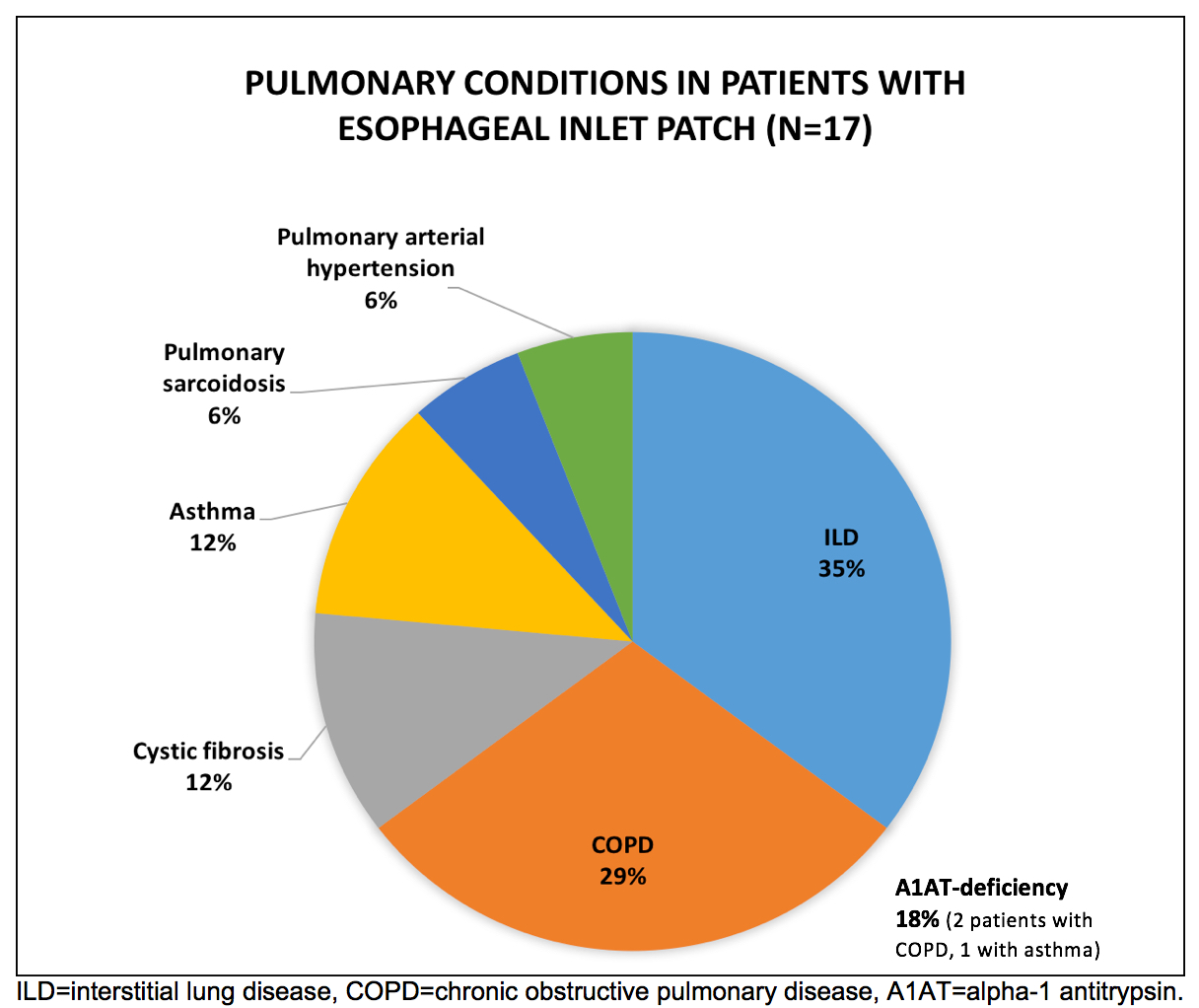 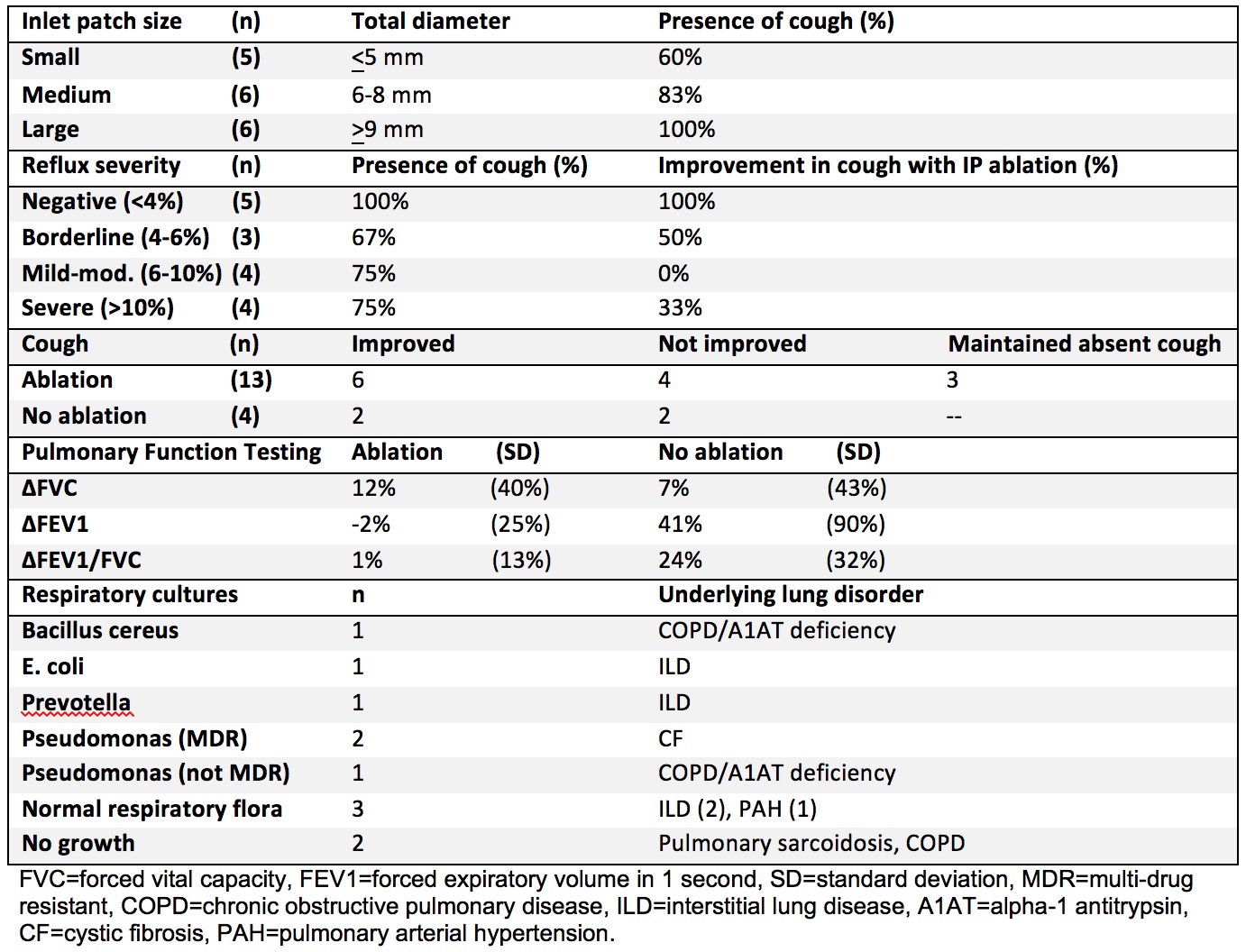