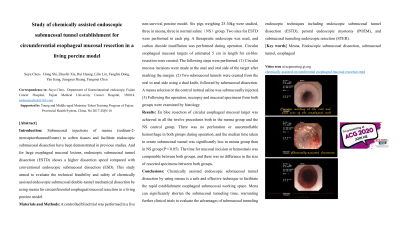 Methods: A controlled blind trial was performed in a live non-survival porcine model. Six pigs weighing 25-30kg were studied, three in mesna, three in normal saline（NS）group. Two sites for ESTD were performed in each pig. A therapeutic endoscope was used, and carbon dioxide insufflation was performed during operation. Circular esophageal mucosal targets of estimated 5 cm in length for en-bloc resection were created. The following steps were performed: (1) Circular mucosa incisions were made at the anal and oral side of the target after marking the margin. (2) Two submucosal tunnels were created from the oral to anal side using a dual knife, followed by submucosal dissection. A mesna solution or the control normal saline was submucosally injected. (3) Following the operation, necropsy and mucosal specimens from both groups were examined by histology.
En bloc resection of circular esophageal mucosal target was achieved in all the twelve procedures both in the mesna group and the NS control group. There was no perforation or uncontrollable hemorrhage in both groups during operation, and the median time taken to create submucosal tunnel was significantly less in mesna group than in NS group (P＜0.05). The time for mucosal incision or hemostasis was comparable between both groups, and there was no difference in the size of resected specimens between both groups.