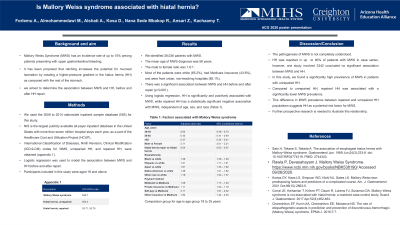 Introduction: Mallory Weiss Syndrome (MWS) has an incidence rate of up to 15% among patients presenting with upper gastrointestinal bleeding. It has been proposed that retching increases the potential for mucosal laceration by creating a higher-pressure gradient in the hiatus hernia (HH) as compared with the rest of the stomach. In this abstract, we aimed at determining the association between MWS and HH, before and after HH repair.

Methods: We used the 2009 to 2014 nationwide inpatient sample database (NIS) for this study. NIS is the largest publicly available all‐payer inpatient database in the United States with more than seven million hospital stays each year, as a part of the Healthcare Cost and Utilization Project (HCUP). International Classification of Diseases, Ninth Revision, Clinical Modification (ICD-9-CM) codes for WMS, unrepaired HH, and repaired HH, were obtained (appendix 1). Logistic regression was used to model the association between MWS and HH before and after repair. Participants included in this study were aged 18 and above.

Results: We identified 38,036 patients with MWS. The mean age of MWS diagnosis was 56 years. The male to female ratio was 1.6:1. Most of the patients were white (65.2%), had Medicare insurance (43.6%), and were from urban, non-teaching hospitals (85.1%). There was a significant association between MWS and HH before and after repair (p< 0.001). Using logistic regression, HH is significantly and positively associated with MWS, while repaired HH has a statistically significant negative association with MWS, independent of age, sex, and race (Table 1).

Discussion: The pathogenesis of MWS is not completely understood. HH was reported in up to 80% of patients with MWS in case series, however, one study involved 2342 concluded no significant association between MWS and HH. In this study, we found a significantly high prevalence of MWS in patients with unrepaired HH. Compared to unrepaired HH, repaired HH was associated with a significantly lower MWS prevalence. This difference in MWS prevalence between repaired and unrepaired HH populations suggests HH as a potential risk factor for MWS. Further prospective research is needed to illustrate this relationship. 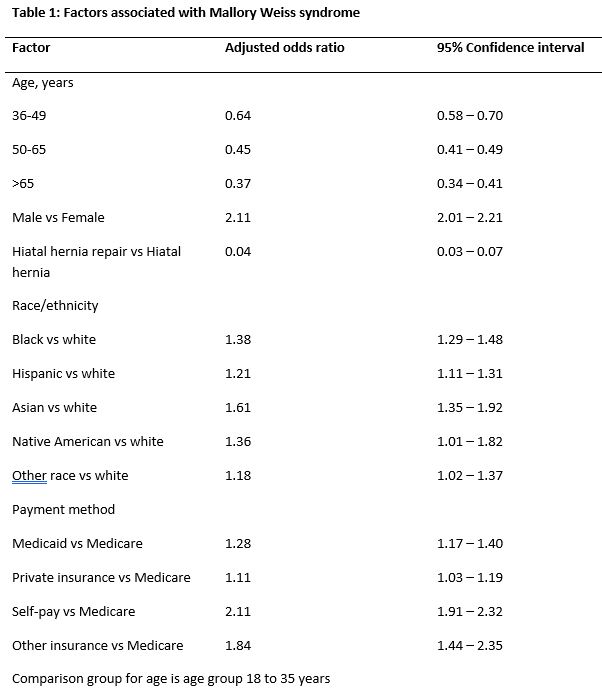