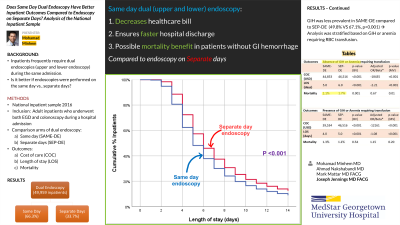 Introduction: Same-day dual endoscopy (SAME-DE) is a common procedure performed in the practice of gastroenterologists. The indications of SAME-DE are diverse and can include gastrointestinal hemorrhage (GIH) from an unidentified source, anemia, and suspicion for GI malignancy. We aim to study outcomes such as mortality, length of stay (LOS) and cost of hospital care (COC) for inpatients undergoing SAME-DE and compare it to patients undergoing EGD and colonoscopy on separate days.

Methods: This study was based on the national inpatient sample (NIS) 2016 database. All adult inpatients who underwent both EGD and colonoscopy during a hospital admission are included. Patients were categorized into comparison arms, SAME-DE and separate days dual endoscopy (SEP-DE). Outcomes studied were LOS, COC, and inpatient mortality. Medians were represented with interquartile range (IQR). Multivariate binary logistic and linear regression were performed to adjust for age, gender, white race, income, insurance, heart failure, renal failure, cirrhosis, GI neoplasm, and SAME-DE. Survival analysis was performed to plot time to discharge.

Discussion: Inpatient SAME-DE appears to be a more safe and efficient method compared to SEP-DE. Performing SAME-DE helps in decreasing the healthcare bill and ensuring faster discharge from hospitals and may have a mortality benefit in patients without GIH.

Table 1. Results of bivariate and multivariate analysis for the outcomes based on the timing pattern of dual endoscopy 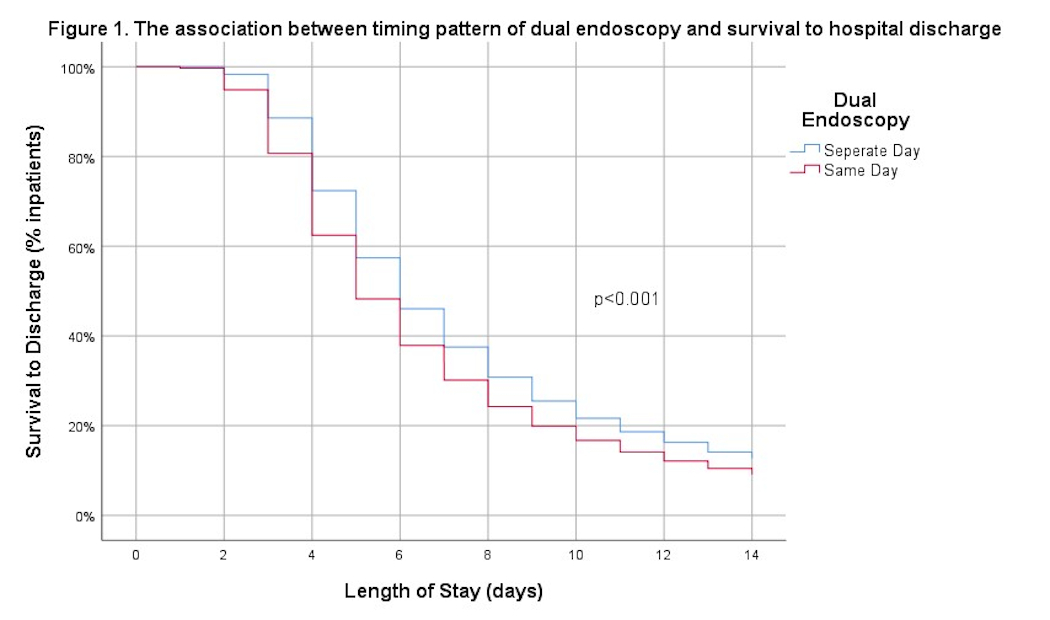