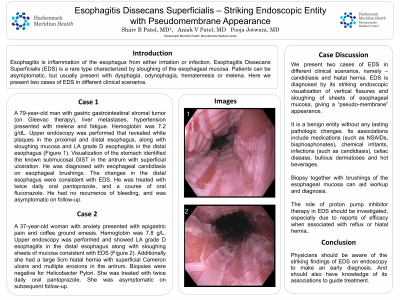 Esophagitis is inflammation of the esophagus from either irritation or infection. Esophagitis Dissecans Superficialis (EDS) is a rare type characterized by sloughing of the esophageal mucosa. Patients can be asymptomatic, but usually present with dysphagia, odynophagia, hematemesis or melena. Here we present two cases of EDS in different clinical scenarios.

Methods: Case 1: A 79-year-old man with gastric gastrointestinal stromal tumor (on Gleevac therapy), liver metastases, hypertension presented with melena and fatigue. Hemoglobin was 7.2 g/dL. Upper endoscopy was performed that revealed white plaques in the proximal and distal esophagus, along with sloughing mucosa and LA grade D esophagitis in the distal esophagus (Figure 1). Visualization of the stomach identified the known submucosal GIST in the antrum with superficial ulceration. He was diagnosed with esophageal candidiasis on esophageal brushings. The changes in the distal esophagus were consistent with EDS. He was treated with twice daily oral pantoprazole, and a course of oral fluconazole. He had no recurrence of bleeding, and was asymptomatic on follow-up.

Case 2: A 37-year-old woman with anxiety presented with epigastric pain and coffee ground emesis. Hemoglobin was 7.8 g/L. Upper endoscopy was performed and showed LA grade D esophagitis in the distal esophagus along with sloughing sheets of mucosa consistent with EDS (Figure 2). Additionally she had a large 5cm hiatal hernia with superficial Cameron ulcers and multiple erosions in the antrum. Biopsies were negative for Helicobacter Pylori. She was treated with twice daily oral pantoprazole. She was asymptomatic on subsequent follow-up.

We present two cases of EDS in different clinical scenarios – candidiasis and hiatal hernia. EDS is diagnosed by its endoscopic visualization of vertical fissures and sloughing of sheets of esophageal mucosa, giving a “pseudo-membrane” appearance. It is a benign entity without lasting pathologic changes. Endoscopists must be aware of this striking entity, so as to identify and treat any possible underlying etiology. Associations include medications (NSAIDs, bisphosphonates), chemical irritants, infections (such as candidiasis), celiac disease, autoimmune bullous dermatoses and hot beverages. Biopsy and brushings of the esophageal mucosa can aid workup and diagnosis. The role of proton pump inhibitor therapy in EDS should be investigated, especially due to reports of efficacy when associated with reflux or hiatal hernia. 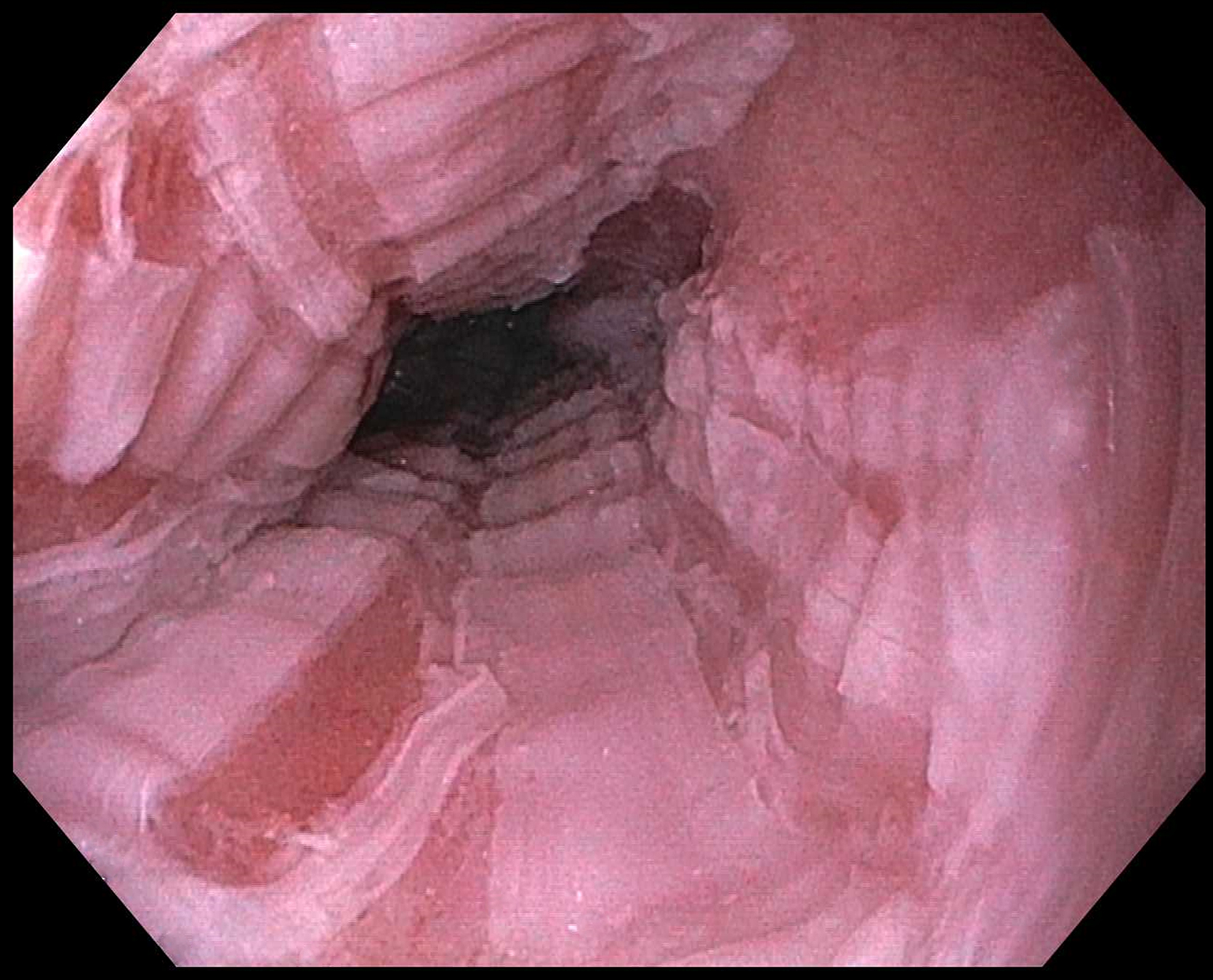 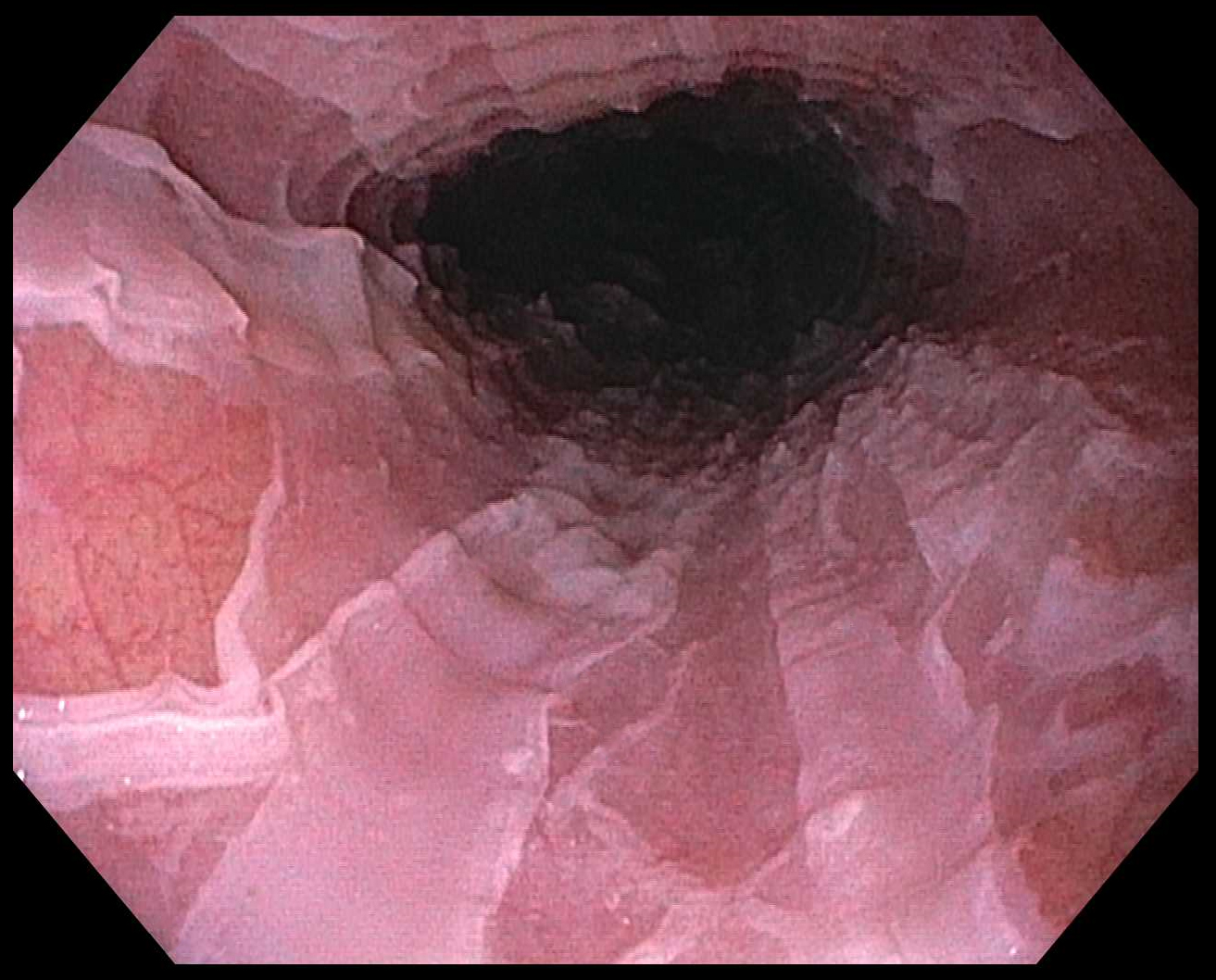