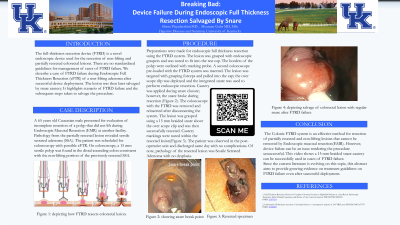 Introduction: The full-thickness resection device (FTRD) is a novel endoscopic device used for the resection of non-lifting and partially resected colorectal lesions. There are no standardized guidelines for management of cases of FTRD failure. We describe a case of FTRD failure during Endoscopic Full Thickness Resection (eFTR) of a non-lifting adenoma after device deployment that was successfully managed by snare cautery. It highlights scenario of the FTRD failure and the subsequent steps taken to salvage the procedure.

Methods: A 65 years old Caucasian male presented for evaluation of incomplete resection of a polyp that did not lift during Endoscopic Mucosal Resection (EMR) at another facility. Pathology from the partially resected lesion revealed sessile serrated adenoma (SSA). The patient was scheduled for colonoscopy with possible eFTR. On colonoscopy, a 15 mm sessile polyp was found in the distal ascending colon consistent with the non-lifting portion of the previously resected SSA. Preparations were made for endoscopic full thickness resection using the FTRD system. The lesion was grasped with endoscopic graspers and was noted to fit into the test cap. The borders of the polyp were outlined with marking probe. A second colonoscope pre-loaded with the FTRD system was inserted. The lesion was targeted with grasping forceps and pulled into the cap; the over scope clip was deployed and the integrated snare was used to perform endoscopic resection. Cautery was applied during snare closure; however, the snare broke during resection (Figure 1). The colonoscope with the FTRD was removed and reinserted after disconnecting the system. The lesion was grasped using a 15 mm braided snare above the over scope clip and was then successfully resected with all the cautery markings noted within the resected lesion(Figure 2). The patient was observed in the post-operative unit and discharged same day with no complications.

Discussion: The Colonic FTRD system is an effective method for resection of partially resected and non-lifting lesions that cannot be removed by EMR. However, device failure can be an issue rendering the procedure unsuccessful. This video shows a 15 mm braided snare cautery can be successfully used in case of FTRD failure. Of note, pathology of the resected lesion was Sessile Serrated Adenoma with no dysplasia. Since the current literature is evolving on this topic, this abstract aims to provide growing evidence on treatment guidelines on FTRD failure even after successful deployment. 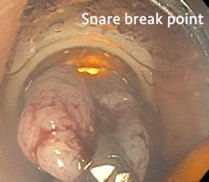 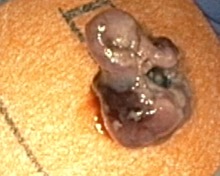