P0682 (S1804). - Gut Friend or Foe: A Case of Lactobacillus Rhamnosus Endocarditis from Probiotic Use 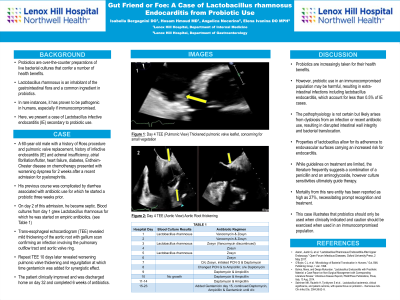 Introduction: Probiotics are over-the-counter preparations of live bacterial cultures that confer a number of health benefits. Lactobacillus rhamnosus is an inhabitant of the gastrointestinal flora and a common ingredient in probiotics. In rare instances, it has proven to be pathogenic in humans, especially if immunocompromised. Here, we present a case of Lactobacillus infective endocarditis (IE) secondary to probiotic use.

Methods: A 60-year-old male with a history of Ross procedure and pulmonic valve replacement, history of infective endocarditis (IE) and adrenal insufficiency, atrial fibrillation/flutter, heart failure, diabetes, Erdheim-Chester disease on chemotherapy presented with worsening dyspnea for 2 weeks after a recent admission for pyelonephritis. His previous course was complicated by diarrhea associated with antibiotic use for which he started a probiotic three weeks prior. On day 2 of this admission, he became septic. Blood cultures grew Lactobacillus rhamnosus for which he was started on daptomycin and ampicillin. Trans-esophageal echocardiogram (TEE) revealed mild thickening of the aortic root with gallium scan confirming an infection involving the pulmonary outflow tract and aortic valve ring. Repeat TEE 10 days later revealed worsening pulmonic valve thickening and regurgitation at which time gentamicin was added for synergistic effect. The patient clinically improved and was discharged home on day 32 and completed 6 weeks of antibiotics.

Discussion: Probiotics are increasingly taken for their health benefits. However, using probiotics in an immunocompromised population may be harmful, resulting in extra-intestinal infections including lactobacillus endocarditis, which account for less than 0.5% of IE cases. The pathophysiology is not certain but likely arises from dysbiosis from an infection or recent antibiotic use, resulting in disrupted intestinal wall integrity and bacterial translocation. Properties of lactobacillus allow for its adherence to endovascular surfaces carrying an increased risk for endocarditis. While guidelines on treatment are limited, the literature frequently suggests a combination of a penicillin and an aminoglycoside, however culture sensitivities ultimately guide therapy. Mortality from this rare entity has been reported as high as 27%, necessitating prompt recognition and treatment. This case illustrates that probiotics should only be used when clinically indicated and caution should be exercised when used in an immunocompromised population.